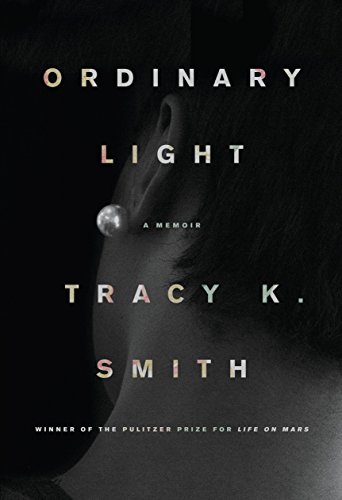 There’s a Terrance Hayes line that goes “A bandanna is a useful handkerchief, but a handkerchief is a useless-ass bandanna.” A golfer or three-point-shooter might say “Never over, never in.” An uncle of mine lived by the notion “give me a pickup that drives like a sports car over a sports car any day.” Which brings me to the notion of poets writing prose.  They are the bandannas/pickups/Stephen Currys of literature.

There has been a fine recent spate of poets’ retrospectives. Mary Karr’s third, Lit; Elizabeth Alexander’s luxurious celebration of her abruptly departed husband, The Light of the World; and this considerable memoir by Pulitzer prix-honneur prisoner Tracy K. Smith are notable examples.

A wonderful excess is always possible when a poet writes prose; we’re getting a bonus, a capaciousness beyond our usual hopes. It may be unfair to compare Smith and Alexander, but it’s inevitable: both are American poets writing in response to the loss of a loved one and their works have come out at almost the same time.

In Smith’s case she is calling back to her mother, beneath the appearance of whose staunch Christian belief Smith reports having failed sufficiently to peer during her undergraduate days and her mother’s final ones. A long and painstaking lead-in walks us through her family’s thronged life, with Tracy the youngest of five and the protected darling of a much-travelled Hubble-space telescope engineer.

Crucially, she is never sure, when it comes down to it, whether her mother really and truly believes, and whether she herself should come clean about her own strenuous doubts.

Literary critic Kevin O’Connor has written that Smith “writes with the kind of fearlessness and grace that can only be founded in real faith,” referring not to “any particular religion or doctrine, but something more like what William Wordsworth described as . . . the faith that looks through death.”

When her mother dies, Tracy looks up, and it can feel to a reader as if her faith is born then. Not in the conventional sense that she intuits the rising of her mother’s soul into heaven, although there’s an affecting gesture in that direction, but that Tracy makes the imaginative leap of thinking what her mother, even beyond death, might be thinking, how she might be perceiving her. It’s an extraordinary step, a creative accomplishment, a breaking of a threshold. That’s the foundation of her true faith, that writing might be the heaven she hopes for, the real communion of saints.

“In the first moments after her death, when it was clear that she was gone, I looked up at the ceiling above where her body lay. I had been thinking about what people say happens when a person dies, how the spirit hovers in the room awhile, watching from above, taking in the fact that it has come free of the body that was once its anchor. . . . I wanted her to see my face as she floated off toward whatever awaited her, as if that gesture might serve as a signal that I believed she was on her way to that elsewhere, the tunnel and the light, the other side.  But I hadn’t given any thought to what it would feel like to me, staring up at what my eyes told me was nothing at all.”

Later, visiting the home of a girlfriend who had also just lost her mother, in the company of a few other motherless girls, Ms. Smith finds herself looking up at the immensity of the night sky. One of the other girls says “I think she’s there and here at the same time.”  But Tracy will have none of it.  “There’s just so much out there….” As they make their way back to the ranch house they’re staying in, it is the ordinary light of the kitchen that Tracy yearns to regain.

It’s the moment that gives this book its title, and it’s not a particularly impressive moment.  More bold, more free, more exhilarating are the starry nights in Smith’s poetry, where a brash verbal energy and some pluckily conflicting metaphorical ontologies elbow each other out of the way for the reader’s attention. Smith’s sure-fire prominence in twenty-first-century American literature will come from poems like “The Universe Is a House Party” and “My God, It’s Full of Stars” and poetry collections like The Body’s Question rather than a memoir like Ordinary Light, a work whose dutiful, maybe overly careful ancillary service will only grow in importance as more poetry prizes come pouring in.