Preparation for the Next Life 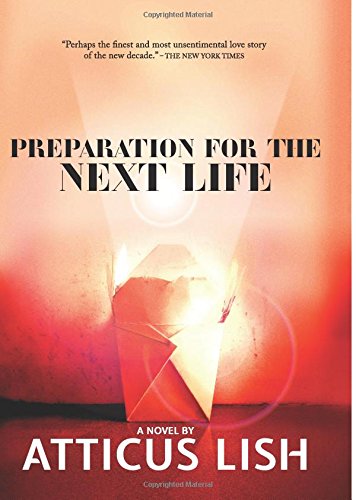 “Not since Charles Frazier’s Cold Mountain have such arduously yearning treks been made through maddening, heartbreaking obstructions in the name of love.”

This is a steeply pitched melodrama from the very first, with our hearts going out to a spunky Uighur girl and tracking her and an American Iraq vet as their paths approach, cross, join, and sometimes are put asunder.

I’m not kidding about paths and tracking here: these two love to run, just as Lish himself and his real wife do, to judge from his early blogs. Like another former Marine, the late great Andre Dubus, Lish and his characters seem ready to pick ’em up and lay ’em down at a moment’s notice no matter what the weather, no matter what is or isn’t on their feet: just as State Department wonks on network TV can’t talk without walking, Skinner and Zou Lei are hard to picture standing still. Reading the novel feels like playing some kind of parkour-based computer game, the two of them running gamely through an urban landscape, again and again, singly or paired, sometimes to get to work on time, sometimes to outstrip a creep, sometimes just for fun and to work off their considerable animal vitality.

Have GoogleMaps ready whenever you notice Lish's characters putting on their running shoes or hiking boots, for tracking Zou Lei or Skinner across the eastern boroughs of the city and out to Great Neck can be as engrossing as checking off Bloom's ports of call in Dublin, their virtually tireless strides offering fine pretexts for Lish’s lushest detailing.

“The road ran by a park area that was dead gray in the dull light, and the houses behind it were utterly silent. She heard a string of pistol reports. A bearded man ambling in the street lifting his shirt and touching his flat belly noticed her the way you notice money lying on the sidewalk.”

Lish’s dialogue convinces and disturbs; his descriptive style is never unsuitable to its junky, provisional spaces or the unmoored ethics of most of his cast (at its richest, it is all about absolute phrases, which themselves tend to be all about syntactical unaccountability).  “They gave her a shirt with an insignia and a visor, the smell of vaporized grease in the fabric.” (first page) “She unzipped her gym bag and took out her spandex and her Asics, old bloody footprints on the insoles, and got dressed.” (last page)

Theirs is a grim, threatening, dispiriting world but Zou Lei is a miracle of pluck and positivity; undocumented, without recourse or remedy in the face of wrenchingly unfair exploitation, she is capable of getting her mojo back just by doing a bunch of pushups or taking a long hard run.

Skinner himself is no altar boy, given as he is to unpredictable flare-ups of anger, suspicion and cruelty, but he looks pretty good when you compare him to the book’s chief bad-guy, Jimmy, the sadistic son of the tough-guy landlord. It is in unflinchingly, unapologetically following Jimmy that the book gets into its worst material, his brutal beating and sodomizing of a Chinese masseuse, but this heinousness serves well to raise the stakes of Skinner’s love for and protection of Zou Lei.

When Lish isolates his heroine and has Jimmy come calling, your skin will doubtless crawl, and it will matter a lot that Skinner is another long walk or exhausting run away. Not since Charles Frazier’s Cold Mountain have such arduously yearning treks been made through maddening, heartbreaking obstructions in the name of love.