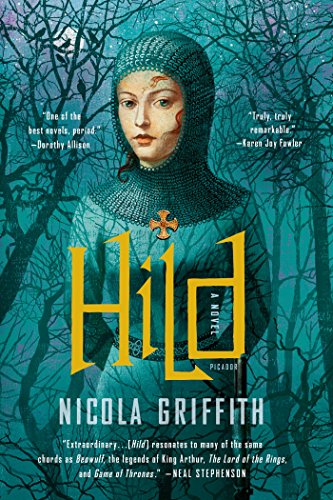 Nicola Griffith is a spunky and fascinating personage, not at all loath to put herself out there: blogs, interviews, appearances, a multimedia memoir you can order that comes in a box with some of her early art and songs, some scratch-and-sniff postcards and other surprises. She is known to many as the author of the three Aud Torvingen novels, keenly imagined stunners that follow a six-foot-tall former lady cop from Norway through some very dark places.

Her new novel, another stunner, takes the exiguous traces left by the seventh-century saint Hilda of Whitby and makes her a six-foot-tall bad-ass royal seer to the king of Northumbria, a young woman who, exceptionally, can read, strategize, and moonlight, literally, as an extraordinarily fell albeit only staff-wielding anti-banditry special-ops commander.

Professors of Old English Lang and Lit out there, hear ye this: while your undergrads are memorizing their first batch of strong verbs, you could also get them started with Hild and by the end of week one they’d know what a gesith was, and what a gemaecce, and how to use all manner of Anglisc weapon and kitchen implement, what warriors’ sleeping quarters smelled and sounded like, how clothes felt, and what might get a Northumbrian king mad at you. This writer knows her stuff and if she doesn’t she takes the trouble to find out.

Word has it she also makes corrections to her books between editions. So let’s get this out of the way fast. It won’t be about anachronism. Her Anglo-Saxon fact-checkers are clearly world-class (details of manufacture, husbandry, warfare, navigation and the like never fail to convince). She seems better served by her medievalists, however, than by her editors. We get locutions like “different…to” rather than “different from,” and “overlain” in place of “overlaid.” A tricky missed verb:  “If neither you nor Breguswith take care of it, I will.” And one fairly bad pronoun bungle: “She grinned at Cian, whom she’d made sure sat next to her.”

Minor quibbles, really, in a work characterized by thrillingly fresh and fitting diction:  “a stream guarded by a wind-thrawn oak,” “under a tattered sky,” “with the sun came heat like a fist.” Her dialogue is a lot of fun; Griffith doesn’t overstate and break down her characters’ implications, leaving it to us most often. During Hild’s extended sexual innocence, for example, smutty jokes, rather good ones, are scattered around by other characters and left alone.

It is a story to some extent carved out of chronicle, and therefore somewhat limited, even servile, in its plot.

What therein can be construed as usefully propulsive?  Griffith tries to keep us involved with dynastic worries, the fear of attack and Hild’s sense that if she fails as seer, the king might have her killed. Could Hild be married off as a “peace-weaver”? Can she trust her mother? Do the king’s folk really think she’s a witch? Will the jealous priests and would-be bishops gain power over her? (But for a charming and wise old Irish renegade, clerics in the book are contemptible and absurd.) At about three-quarters in, the seasons poetically passing and all being well, a reader might ask why Griffith bothered with it all, but that’s about the time we hit the rapids.

Interest mounts, of course, when people start thinking about mounting our hero; a long tease is maintained between Hild and her hunky, heroic half-brother, and she finally undergoes a sexual initiation at the hands of her beautiful house-slave, an experience as transformative for Hild as her first kills, very brutal ones, on patrol.

One great thing about books where the protagonist is a detective (or former cop with a death to deal with, like Griffith’s Aud) is that every detail can rise to the level of clue. Here, Hild’s being a seer makes every flight of birds, every cough by a baby, every precarious bud on a sapling thematic, operative in or reflective of the royal fortunes, and therefore hers. She is, ex officio, an interpreter and accordingly a good surrogate for the author.

“Watch men and women, her mother said, put yourself inside them. Imagine what they’re thinking.”

“All she had to do to earn the gifts to turn into coin was to see clearly, to see first.”

This story is not a hagiography, at least not yet. Hild is an athlete, a tactical genius, a master psychologist, a promising ethno-botanist, but certainly in no sense a mystic or a woman of prayer.

A powerful figure, she embodies by the end of the volume a good many current ideals of womanhood, but it’s hard at this point to picture her turning into a nun, much less an abbess, still less a saint. Griffith is working now on the next in the series, and there’s an outside chance she is structuring things like the story of the late-blooming saint, Augustine, who famously said to God, sero te amavi (Too late have I loved Thee). In Hild’s case, so far anyway, it really would be zero te amavi.

Will Griffith do some magic with her? They both have it in them.

If I were a seer, I’d predict instead, at least in large part, a punishing satire of religion in volume two, with no quarter shown.