The Givenness of Things: Essays 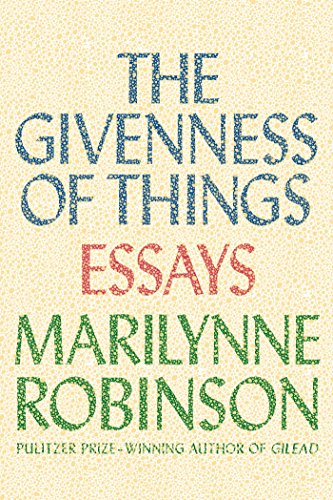 In the second and final installment of a recent extended back-and-forth (shouldn't it be "forth and back"?) between President Obama and Marilynne Robinson in The New York Review of Books, what was notable was that the president did most of the sallying forth and she gave back rather little. At one point he lobbed her a nice, flattering softball about the place of novels in a context of "flashier ways to pass the time," and all she gave him back was "I'm not really the person--because I'm almost always talking with people who love books."

Fair enough, if Robinson is writing nothing but fiction: surely stories don't have to take an interest in currently popular media to work. But "almost always talking to people who love books" could be a problem for a writer interested in producing essays about the current intellectual climate and what has led up to it. And Robinson may have an even bigger problem of that kind: in her new book she seems almost always to be talking to people who love Jesus.

The 17 writings in her recent collection, The Givenness of Things, are not essays so much as lectures; there's a big difference between the two. Most of them were given on special occasions to churches, religious conferences, theological and divinity schools, and religiously affiliated colleges. (A partial list: the First Presbyterian Church of New York City; Santa Clara University; Theos Think Tank; the University of Notre Dame; Western Theological Seminary; Union Theological Seminary; Regent College; the Divinity School, Oxford University; the Soul Conference at Oxford University; the School of Divinity at the University of Edinburgh.) More often than not she manages to break through from preaching to the choir to the even less useful level of singing to the preachers.

Since Robinson doesn't tell us where she said what, there might be some grim, minimal fun in guessing where individual lectures were given.

"My country has a relatively brief history. . . ." she tells some people, likely Brits or Scots.  "Christ is a gracious, abiding presence in all reality, and in him history will finally be resolved," she says, ostensibly to some theologues, somewhere rather prayerful  (Union? Western? Edinburgh Div?).

"The Enlightenment of the anti-Enlightenment imagination was right about everything factual, incisive in its methods, but wrong in thinking beyond certain conventions and boundaries within which a higher and precious but oddly fragile Truth once abided."

What dread Casaubons brooked that?  What the hand dare seize the fire? What the library, what the chairs?  What the post sherry-party auditorium? Or, more basically, more urgently, WTF?

Some of these audiences seem to have inspired better thinking than others. The final three essays are like the last jugs of wine at Cana. And Garry Wills probably left before the dancing started. His was the review in the NYRB and it was unstinting in its praise, largely a celebration of Robinson's career as novelist and Shakespearean scholar. But don't be misled by Professor Wills: Although Robinson's essays slip into Shakespearean cadences and patch in famous phrases, only people who know what a "high Christology" is will fully dig this book. Those who want to know what it was like to write Gilead will walk away like the rich young man, unrejoicing.

Late last century I boarded in an Anglican theological college during my first year of grad school in Toronto, and the Anglican savant/soldier/spy/wit Malcolm Muggeridge gave a talk, solidifying his position as heir to G. K. Chesterton and C. S. Lewis as Christian apologist to the modern secular world. He’s gone now. Robinson seems to be going for this vacancy.

As in all religious apologias, straw men proliferate: "It is broadly assumed that the Elizabethan population subscribed to an ideology that . . ."  "In other quarters, of course, there are many who see moral collapse as imminent . . .").  Densely underconstrued scholarly references move pari passu through these speeches along with aphoristic almost-got-you-to-laugh lines, some rather gratuitous, reckless, bordering on poor taste:

"Americans are very good at rescuing each other. . . . There is considerable drama in life in North America, from a meteorological point of view, and every calamity inspires an urgent civic festival of rescue and reparation, sandbags and pizza, bandages and backhoes and bratwurst." Isn't this charming and sprightly and fun! She's setting up a punishing diatribe against our failure to alleviate the effects of the financial disaster of 2008. But how does a real flood victim not feel the jagged edge hidden in that little riff?

There are argumentative cul de sacs. (When are they going to invent a shrug emoji? It would have come in handy for Robinson.) The most frequently repeated sentence in the book, not surprisingly, is "Be that as it may." A bad sign, a telltale of inconsequence.

But this is a valuable book from an undeniably irreplaceable thinker. Who else among credent writers could line up John Locke and Richard Feynman and show that they are saying the same thing about how the cells of our brains are quickly replaced, how nothing physical of our brains remains between a thought conceived a year ago and the same thought today?

She is far from charmless. One can't make this many speeches and fail to unleash a few good captationes benevolentiae:

"I wrote my doctoral thesis on Shakespeare, and I am very glad I did, even though, in retrospect, I think I was wrong about a great many things. I suppose there is enough money in the world to induce me to read it again sometime, foreign currency being taken into account."

"It really is rather miraculous that someone as ill-suited to the demands of life as I am should have found a niche to flourish in. I have lived long enough to chalk up to age inadequacies that have been with me the whole of my conscious life."

Like the rest of us, Professor Robinson isn't above losing track of herself:  "The generosity to the generality of people that gave us most of our best institutions would be considered by many pious people now to be socialistic, though the motives behind the creation of many of them, for example these fine colleges, was [sic] utterly and explicitly Christian."

Words fail.  She gives us “an argument for a higher order of objective facticity . . ." when she clearly means factuality.

Progressive as she is (and unmistakable anti-gun, anti-nuclear, anti-Iraq war, anti-too-big-to-fail passages justify the president's favor), Robinson shows a Hamlet-like ambivalence about human nature. Our blessed cussedness as a species inspires some of her best prose.  "It is possible to claim a dignity for humankind that is assured because it is bestowed on us, that is, because it is beyond even our formidable powers to besmirch and destroy. Say that the one earthly thing God did not put under our feet was our own essential nature. The one great corrective to our tendency toward depredation would be a recognition of our abiding sacredness, since we are both, and often simultaneously, victim and villain. The divine image in us, despite all, is an act of God, immune to our sacrilege, apparent in the loveliness that never ceases to shine out in incalculable instances of beauty and love and imagination that make the dire assessment of our character, however solidly grounded in our history and our prospects, radically untrue."

As an apologist for Christian belief, Robinson may get mixed grades. She gives up pretty quickly on the problem of evil. Boethius and C. S. Lewis did better. But in setting up an analogy between space researchers and atheists, she gains some ground for her side.

"When we fling some ingenious mock sensorium out into the cosmos so that it can report back what it finds there, inevitably it provides human answers, data addressed to notions of relevance that, however sophisticated, are human notions. We will never know what we don't know how to ask, which is probably almost everything."  "The criticism of religion that derides its central intuition as a projection of human fears and desires onto a universe that is alien to such things is itself a projection of human inferences, deductions, and expectations onto a universe that is wholly incommensurate with them."

Marry, by the mast, well bethought.