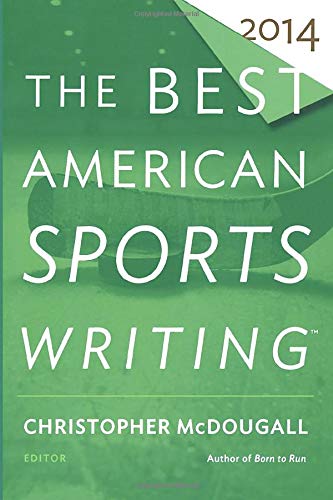 One test of the uniform quality of the work in Best Essays collections like this one is whether or not a writer who almost made the cut, listed in the back as “Notable,” would be likely to read what got into the collection and just nod and tip his or her hat, like a Hall of Famer struck out looking by a big looping yakker, or stand there jawboning at the ump. Chris McDougall, this year’s editor, might have some explaining to do to those writers.

One has through the years turned to this last with a special appetite, a feeling that it will be companionable, fascinating, richly detailed work, that the athletics on display will be significant, quirky, humane—the kind of account that a great and free-spirited writer can produce, the exploits of Biff Loman at Ebbets Field, say, as told not by the pathetic helicopter fan-dad/windbag Willy but by the discerning intellectual neighbor boy Bernard, in non-specialists’ language, like how he would explain it to his father Charlie, who tells Biff, as he goes off to play football, “Hit a homer!”

There isn’t much of that kind of writing in this collection. It’s not that the selected writers are incapable of it (Charlie Pierce, Ian Frazier, Jonathan Mahler, Mary Pilon, and Ben McGrath can more than discharge that duty), but that what they choose to write about doesn’t tend to be the performance of the athletes. Most of these writers are drawn more to what goes wrong off the field. The book is more about CSI than MVP, RBI, ERA or H of F.

Current sports discourse (on cable, blogs, radio) seems dominated by the tens of thousands of communications majors who know how to do sabremetrics, handle a website, win a call-in shouting match or run a fantasy team. These are hard people to blindside with significant technical facts. To judge from this collection, long-form sports writing has moved decisively from richly voyeuristic, well-informed play-by-play to earnestly extended treatments of the lesser or at least less celebrated lives led in sport's criminal, corporate and medical margins.

This collection leads with an agonizingly protracted account of the dismally convincing murder rap on Aaron Hernandez. The prose stays within the confines of that very unsportsmanlike genre, the police procedural, where every detail by every suspect, and every suspect’s associate, no matter what the eventual disposition of things, is itself deeply suspect and the only thing you’ll never feel is admiration.

Don’t expect Roger Angell or Updike here: the gumshoe prose of Solataroff and Borges bumps along like a manacled perp walk itself, graceless and grudging, with a nasty animus against Pats coach Bill Belichick, flexing and posing in feckless threat: “Mortified, Hernandez returned to Boston; Belichick, per a close Hernandez associate, had told him to lay [sic] low, rent a safe house for a while.”

The rank stench of the discreditable pervades more of these writings than you’ll probably feel good to have paid for, unless you are an activist campaigning against the cult of youth sports.  The only true respite from skepticism about competitive sports, oddly, is Amanda Ripley’s “The Case Against High School Sports,” which slyly fights that motionless straw man to a standstill, adducing one small rural school district and one women’s college that briefly cancelled interscholastic athletics.  Ripley concludes that a focus on academics in high school would make us “look not so different from South Korea or Japan . . . whose hypercompetitive, pressure-cooker approach to academics in many ways mirrors the American approach to sports.”

Editor McDougall takes us from Hernandez’s brutalities to an account of a fabulously successful one-legged wrestler (his success turns out to be less of a surprise than one might think), through an arduous instanciation of Japanese athletic hypertrophy (Chris Jones’ magisterial “When 772 Pitches Isn’t Enough”), a grim report of a deluded Cheeverian hoopster/pilgrim (Flinder Boyd’s “20 Minutes at Rucker Park”), Ripley’s piece, and then its natural counterweight, Patrick Hruby’s heartbreaking “The Choice,” a clear exposure of the NFL’s self-serving responses to brain trauma.

By the time we get through the next essay, about a Notre Dame footballer’s bogus claims of playing for a dying girlfriend, it comes as no surprise that Bobby Riggs threw his famous match with Billy Jean King (Don Van Natta’s “The Match-Maker: Bobby Riggs, the Mafia, and the Battle of the Sexes”). Looking hard for something to hold close, something admirable, we can at least salute Billie Jean’s great kindness in helping the craven Riggs look back on the match with a tranquil heart just before he died.

Then Billie Jean King told the happy hustler how important their match’s result will always be to all women.

“Well, we did it,” Bobby Riggs final told her. “We really made a difference, didn’t we?”

Odd doublings and triplings occur in this assortment of essays.  \We get two surfing pieces, three on tennis (two of which are about minority-banner-carrying WTA stars), matching NFL murder cases, two ill-fated race-car drivers, two on shady sports promoters, two on endurance runs that end in death.

Other essays drag one through the ups and downs of people like the loud-mouth bromide master Don King. The storyteller, Jay Caspian Kang, seems to think everybody knows a lot about him: “In the eyes of the public, Don King is a monster because he stole from his fighters.” “To most people these days, he’s little more than a rap sheet and a haircut.”

Suicide is around almost every corner in this volume: disrespected race-car driver Dick Trickle, ostracized fishing guide Joe Randolph, a journeyman cage boxer who stages his own death. If not suicide, then at least shame and obloquy: a coach accused of pornography, a coach caught abusing his players, a tennis diva with anger issues, a scrounging backgammon sharp, another NFL murder-(more-than)-suspect, this last one inspiring some of the dimmest writing you’ll ever find in such a collection, e.g. “On the way back home, they stopped in Las Vegas, where Anthony and Teresa tied the knot.”

Let’s end on some good writing, though; there is some from time to time. How about this from Ian Frazier: “Something momentous always seems about to happen in canyon towns like Maupin, where the ready supply of gravity suggests velocity and disaster.”

Some other lovely bits can be excavated.  Charlie Pierce has the last word, with ten entropic Grantland.com paragraphs about the bombing at the Boston Marathon. Here’s how it, and Mcdougall’s book, ends. “The Marathon will be worth mocking again. But that will not be today. It will not be anytime soon. I sat down near the stone fountain, and wished all of us could wash the day away.”

If sports-writing isn’t written in the spirit of the yearning fan, the would-be star, which is to say writing that serves the dreams and beauties of the sport, looking for great prose in it will be like looking for ESPY-worthy footage in the parking lot. Even the best of what you find there may make you cringe and bring you pretty quickly back down to earth.