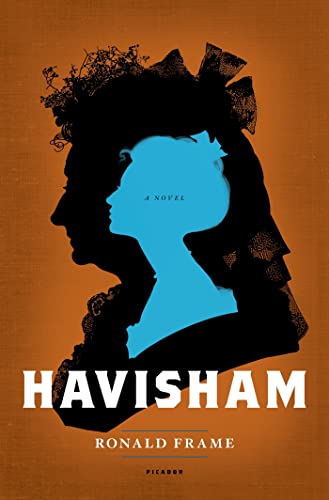 Imagine: Although your normal workday is perfectly honorable and suited to your talents, you must take advice from exploitative mentors and allow yourself to be confined in an unnatural enclosure. You’re also under scrutiny, expected to be creative and to have fun, all the while forced to minister to a histrionic old crone who has long since ceased to deserve whatever toadying attention the world has chosen to give her.

Resourceless, baffled, you resort to having fun the only way you know how.

Readers will easily divine that I’m not talking about young Pip singing the blacksmith song “Old Clem” to the insane Miss Havisham in Dickens’ Great Expectations, but about the fiction writing veteran Ronald Frame, taking the poor thing for a few spins of his own around the wearisome and updated Satis House premises in his new novel Havisham.

Pip’s financial return on it all is pretty paltry, and it’s hard to imagine Mr. Frame doing much better. If you like the original, you like odd little wordplays and self-conscious writing, and the kind of facetiously long periodic sentence that autodidacts like Dickens tend to go for—and that’s a taste Mr. Frame doesn’t seem inclined toward.

You'll not find any of the gorgeous prose setpieces Great Expectations is known for here. In place of Pip's generous declaration of love, you get a dim stereotype of stifled male fury. (“. . . hands clenched by his sides, knuckles flaring white,” etc.)

The story is told by Miss Havisham, and the sad fact is that Catherine Havisham is one of Dickens’ least satisfactory creations, interesting only when she takes a break from her animus.

Better choices for fan fiction might have been the lawyer Jaggers (whose painful “poor dreams,” he hints, mirror Pip’s own), or even Estella herself, whose terrible first marriage could be usefully cautionary and whose emotional rebirth would be as dramatic as Havisham’s without the implausible histrionics.

Giving her so truncated and fragmentary a style of speech, Mr. Frame seems at pains to make the old girl . . . wait for it . . . relateable. For all her pedantry quoting the Aeneid, she’s more Judith Krantz’s Princess Daisy than Virgil’s Queen Dido, briskly traveling after the failed wedding to pubs to sell her brews, holding off predatory investors, washing up, donning a smart black outfit, finally closing the brewery not because she doesn’t care anymore but because she is unhappy with her workforce.

Grotesques perhaps, but Dickens' characters are all more convincing, more interesting, and more functionally effective for the story than Mr. Frame’s.

The original book's Bentley Drummle, for example, who gets the girl, is as villainous and dangerous as Fitzgerald’s Tom Buchanan, so rich he can get away with any prodigality. Mr. Frame makes him into a conniving Wickham, needing Estella's supposed wealth, an authorial choice that increases her leverage over him such that the drama is short-circuited: exposing him would go a long way toward solving Pip’s romantic problem.

The real payoffs in the Dickens novel come after Miss Havisham dies so Mr. Frame doesn't have too much to work with. What opportunities he does have, he squanders. What makes Dickens' Havisham interesting is how, by closely observing Pip at his best moments, she comes back to emotional life—and right in front of the heartless but still redeemable Estella.

You will be happy to hear that Mr. Frame deals with the enduringly troubling big questions raised by Dickens' original: Did she bathe? (Yes.) How did the dress and slippers last all those years? (She had a "modiste" make expensive duplicates.)

One might conclude that Mr. Frame has managed to eliminate the "Ewww"-factor here, but I'm afraid the eighth-grade girls that principally make up most of his target audience aren't so lucky: They’ll hear about her releasing generous flows of piss down her legs and bringing herself to orgasm.

Clearly Mr. Frame isn’t afraid to make changes. He does so in the very first sentence of Chapter One: “I killed my mother.” In Dickens, her mother didn’t die giving birth to Catherine but later, when she was a baby. In Havisham’s agonizingly protracted courtship of Compeyson, it’s precisely that: She courts him. Havisham is more interesting in Dickens; harder to get; more the operatic diva; more bitterly aware of her absurdity; more capable of identifying dishonesty, honesty, and real love.

In period fiction it isn't a question of whether there is anachronism but how damaging it is. You be the judge: "W'm ribbed him." "You've made my day." "He turned around, did a double-take." "Academically she was not going to prove exceptional." "They're good camouflage." "My running narrative about a man . . ." "Sometimes it's really out of focus . . ." "I should have an equal share of it. When he croaks." "She was more Estella-ish."

To his credit, Mr. Frame works in some pretty impressive Dickensian words from time to time, like “malversation” and “etiolated.” By the same token, one can get caught with one’s antiquing gloves on. “By the nonce,” Pip says, and “he cares not a damn.”

Havisham uses “the ancient of days” for “the old days” when it really means, well, Yahweh. And then there are other howlers and tautologies, like “to the point of abject rudeness;” “she averted her eyes to the window;” “criminally speaking;” “boozy imprecations to enjoy myself;” “approaching in our direction.”

Havisham isn’t for everybody. But the Picador Publishing people have doubtless done their homework. A feature film of Dickens' novel is due out soon with Helena Bonham Carter doing the honors.