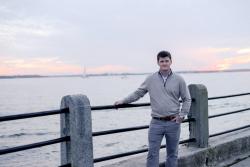 Mr. Zoukis holds a Bachelor’s of Arts in Interdisciplinary Studies (business administration and legal studies) and an MBA in leadership studies from Adams State University.

He has also earned numerous awards for his writing:

College for Convicts: The Case for Higher Education in American Prisons

Federal Prison Handbook: The Definitive Guide to Surviving the Federal Bureau of Prisons

America's Jails: The Search for Human Dignity in an Age of Mass Incarceration (Alternative Criminology)

The United States of America is home to over 3,000 jails. On any given day, these jails hold over 700,000 people. More than 12 million individuals pass through an American jail each year.

Metamorphosis: How to Transform Punishment in America

There is a question that is rarely asked or addressed by any constituent of the American criminal justice system.

Just Mercy: A Story of Justice and Redemption

20 Tips For Power Chicks: Strategies to Influence, Connect, and Be Heard

As we approach the third decade of the 21st century, the stark disparities prevalent between men and women in the workplace have been thrust glaringly into the spotlight.

“a uniquely valuable addition to the scholarship on prison education.”

President Donald Trump watches a lot of television. Tweets from Mr. Trump's account indicate that his viewing habits include a healthy dose of news programming.

The incarceration of a loved one is a traumatic event. For many families, it is also life-altering.

Inside Private Prisons: An American Dilemma in the Age of Mass Incarceration

“In the end, something just doesn't smell right about this industry.”

Since 1989, more than 2,000 people have been acknowledged as innocent victims of wrongful conviction.

End of Its Rope: How Killing the Death Penalty Can Revive Criminal Justice

In September 1983, an intellectually disabled African American teenage boy named Henry McCollum confessed to the brutal rape and murder of an 11-year-old girl.

Justice Failed: How “Legal Ethics” Kept Me in Prison for 26 Years

“Alarming and timely, Justice Failed is a must-read for anyone hoping to better understand the reality of modern American criminal justice.”

“Blind Injustice provides great insight into how wrongful convictions happen in a system designed to avoid them.”

The Evolution of the Juvenile Court: Race, Politics, and the Criminalizing of Juvenile Justice (Youth, Crime, and Justice)

When a juvenile commits a crime, the constituents of the criminal justice system must answer a question: Is the kid a criminal, or is the criminal a kid?

Curtis Dawkins is a rising star in the literary world.

Hell Is a Very Small Place: Voices from Solitary Confinement

“may be as close as most of us will ever come to understanding isolation, a sentence described by William Blake as ‘worse than death.’”

The Eighth Amendment to the United States Constitution prohibits cruel and unusual punishment at the hands of the government.

“The criminal justice system is in need of a seismic shift, and Kelley, Pitman, and Streusands' proposal is exactly the kind of major change needed.”

All Day: A Year of Love and Survival Teaching Incarcerated Kids at Rikers Island

Teaching teenagers is a calling. Despite limited social respect and wages that sometimes border on mere subsistence, dedicated professionals heed the call. The job is not easy.

Anatomy of Innocence: Testimonies of the Wrongfully Convicted

Famed 18th century jurist William Blackstone once said, "It is better that ten guilty persons escape than that one innocent suffer." Theoretically, this is a bedrock principle of American criminal

Prison Grievances: when to write, how to write

“Prison Grievances unique combination of graphic novel and self-help book should be on every prisoner's bookshelf.”

“provides a broad and comprehensive framework from which anyone can gain an understanding of the powerful forces that drive the criminal justice system.”

“belongs in the pantheon of criminal justice scholarship.”

College in Prison: Reading in an Age of Mass Incarceration

“A must-read for any educator or anyone interested in better understanding the transcendental power of higher education.”

God in Captivity: The Rise of Faith-Based Prison Ministries in the Age of Mass Incarceration

Locked In: The True Causes of Mass Incarceration—and How to Achieve Real Reform

“a refreshing look at the causes of mass incarceration . . . a must-read for anyone involved in the criminal justice reform movement.”

Liberating Minds: The Case for College in Prison

“College for prisoners saves money and provides great net benefits to the prisoner and the community.”

The Prison School: Educational Inequality and School Discipline in the Age of Mass Incarceration

As a somewhat jaded and world-weary incarcerated writer, rarely do I read something that makes me really mad.

23/7: Pelican Bay Prison and the Rise of Long-Term Solitary Confinement

In 1852 Charles Dickens said of solitary confinement, "I hold this slow and daily tampering with the mysteries of the brain, to be immeasurably worse than any torture of the body: and because its g

Habeas corpus is a remedy of last resort for prisoners. Used by state and federal inmates alike, it is often the final opportunity to challenge the legality of a criminal conviction or sentence.

Gone 'Til November: A Journal of Rikers Island

Fans of Dwayne Michael Carter, Jr.—also known as Lil Wayne and Weezy—will want to pick up his new journal, Gone ’Til November.

The For Beginners series of graphic nonfiction books take on complicated subjects in an authoritative but accessible and entertaining manner.

On Crimes and Punishments

Criminal justice reform is on the political and social agenda in a way that hasn't been seen in several decades.

Children of the Prison Boom: Mass Incarceration and the Future of American Inequality (Studies in Crime and Public Policy)

As the nation comes to grips with the incarceration boom of the last several decades, sociologists, criminologists, and other experts have begun to closely examine the collateral consequences broug

Mass Incarceration on Trial: A Remarkable Court Decision and the Future of Prisons in America

After Life Imprisonment: Reentry in the Era of Mass Incarceration (New Perspectives in Crime, Deviance, and Law)

Sociologists, criminologists, and other scholars regularly study and debate what works about the American criminal justice system and what doesn't.

Die Not Another: DnA (Volume 3)

One of the most significant pains of imprisonment is being cut off from the outside world. While this is very much a physical segregation, it is also a mental and informational one.

When the average American thinks of prison, she will often draw a blank. Sure, prisons are bad places filled with lawbreakers and violence, but specifics are often few and far between.

Boy with a Knife: A Story of Murder, Remorse, and a Prisoner's Fight for Justice

The American criminal justice system has long wrestled with evolving societal and scientific understandings about how best to deal with crime and criminals. Should we punish or rehabilitate?