Gone 'Til November: A Journal of Rikers Island 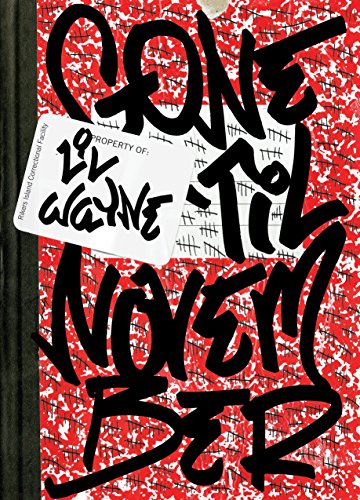 Fans of Dwayne Michael Carter, Jr.—also known as Lil Wayne and Weezy—will want to pick up his new journal, Gone ’Til November. The book is presented as a transcription of his actual journal, kept while locked up at the infamous Rikers Island jail complex in New York City.

Lil Wayne was at the height of his career when he was convicted of illegal possession of a firearm and sentenced to a yearlong stay at Rikers Island. He begins his journal on day one of his sentence. The shock of going from the free world to the confines of a jail are clearly felt by Lil Wayne. Maybe more so, given his wealth and notoriety.

For those who have not been to jail or known someone who has, reading this journal is a great way to get a taste of what it's like. The monotony of daily life, the bugs, dirt, blood and shit . . . in short, the reality of jail life comes through Lil Wayne's words quite clearly. By the time you finish reading the journal, you may be tired of reading that the superstar rapper drank coffee, ate jail burritos, and did pushups every single day. You can be sure that he was tired of doing so. And that is exactly what jail life is. Extreme boredom, hunger, and occasional outbreaks of violence are the hallmarks of jail.

Lil Wayne's struggle to remain motivated throughout his ordeal is inspiring. Even though it is clear from his journal that he received VIP treatment, going from music icon to inmate could have been a crushing blow. Instead, Lil Wayne focused his efforts on his fans, his family, and his music, and found inspiration even in the confines of one of the worst jails in America.

Gone ’Till November is also an intimate and personal look into the mind of Lil Wayne. Fans are rarely granted this level of access to the innermost thoughts of musical superstars. In one passage, Lil Wayne reflects on suicide and the reality of mental illness and how it is addressed in American jails.

"I ended up thinking about all types of shit," wrote the rapper. "One thing that stood out was how I've never been this close to suicide before. It's truly a new reality for me. I was actually there when this kid that was in mental isolation tried to hang up. What's really fucked up is that it all could've been prevented if the COs would've just brought him some water."

In the end, Lil Wayne learns that his creativity and spirit cannot be taken from him even when his liberty can. It's a powerful lesson that came at a high price. But one comes away from this journal feeling that it was a price worth paying.