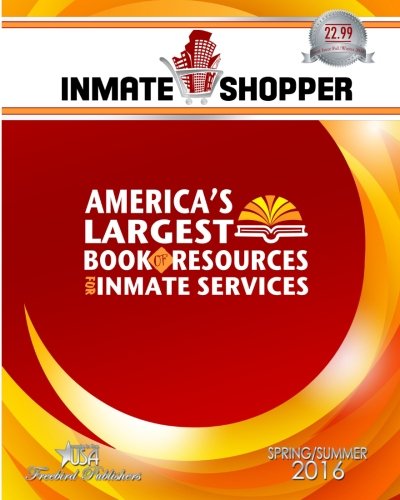 One of the most significant pains of imprisonment is being cut off from the outside world. While this is very much a physical segregation, it is also a mental and informational one. Prisoners lack access to even the most basic of information. For those in prison, there is no Google or YouTube. There is no Siri or Ask Jeeves. All there is is "Inmate Dot Com," a ubiquitous term used to mean the inmate rumor mill, not an actual website, for prisoners lack access to computers, much less the Internet.

This informational void has manifested itself in the creation of a cottage industry which caters to American prisoners who seek information elsewhere. Prisoners lack Internet access, though, so this information must be provided in a printed format that prison mail rooms will allow into the institution—in a book.

Inmate Shopper: America's Largest Book of Resources for Inmate Services, published by Freebird Publishers, is the leader of this industry. Published annually, Inmate Shopper acts as a sort of marketplace for services available to prisoners.

The book profiles over a thousand different service providers, both those that offer services pro bono and those that charge for their services, and has done so since 1996. Originally founded by Arizona death row inmate George Kayer, Freebird Publishers has now taken over the book's publication and annual updates.

One surprising service offered includes a review and numerical rating of each profiled business. According to Freebird Publishers, "All businesses and services are reviewed regularly and rated by the publisher based on feedback from inmates." This review and rating aspect, along with lists of companies that incarcerated buyers should be aware of, ensures that prisoners only do business with reputable service providers who offer a high quality of service. In this vein, Inmate Shopper is like the Yelp of prison.

Each issue of Inmate Shopper provides not only business profiles and affiliated review/rating systems, but also pen pal listings, centerfold pages, catalogs to order products and subscriptions, magazine sellers, an LGBT section, criminal justice news, sexy photos, photo sellers, major sports schedules, articles of interest to prisoners, and more. In short, Inmate Shopper is not only the Yelp of prison service providers, but also an informational and entertainment magazine, all wrapped up into one.