Hell Is a Very Small Place: Voices from Solitary Confinement 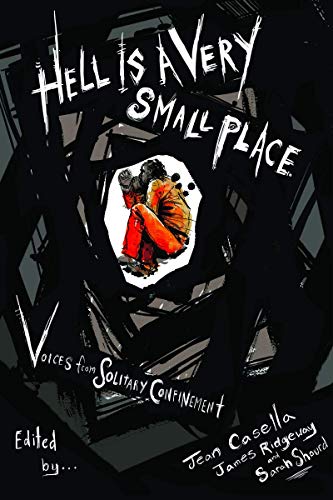 “may be as close as most of us will ever come to understanding isolation, a sentence described by William Blake as ‘worse than death.’”

Well over 150 years ago Charles Dickens described the practice of isolating prisoners as "worse than any torment of the body." Fellow intellectual Alexis de Tocqueville said that isolation "does not reform, it kills." And in an opinion more than a century old, the United States Supreme Court announced that isolation as a penal practice had been abandoned as barbaric.

Yet it is estimated that in the United States of America, up to 400,000 prisoners experience isolation each year. Many of those prisoners spend considerable amounts of time in isolation. The most unfortunate have spent decades suffering conditions long acknowledged by experts to be inhumane and a cause of mental illness. Indeed, United Nations Special Rapporteur on Torture Juan Méndez declared in 2011 that more than 15 days in isolation amounts to torture.

Solitary Watch, founded in 2009, is an advocacy group that aims to bring the horror of isolation "out of the shadows and into the light of the public square." As part of that mission, co-directors Jean Casella and James Ridgeway, along with journalist and former political hostage Sarah Shourd, have put together a collection of essays written by victims of this terrible punishment. Hell Is a Very Small Place: Voices From Solitary Confinement is a powerful indictment of a practice that has no business in an enlightened democracy.

The stories related by those who suffered long periods of isolation are disturbing. In the aggregate, they are also an unusual combination of depressing and uplifting; depressing because it defies belief that the American people allow this type of abuse to go on in the nation's prison systems, uplifting because somehow, the authors have managed to find the will to survive. But the costs are high.

The isolation cells described by the authors are in the six-foot by nine-foot range. Picture a parking spot, or a small walk-in closet and you've got it about right. Throw in a poured concrete bed and desk, a steel toilet, and a light that may never turn off, and the picture is almost complete. Add in the constant smell of fecal matter, urine, and body odor, plus the neverending screaming of deranged prisoners, and the ambiance is complete.

William Blake, who is in his 29th year of isolation, paints the "box" as "like no other place on planet earth." In his award-winning essay, he describes his nearly three decades of suffering as "a thousand internal deaths." When he tries to imagine a death worse than what he has already experienced in isolation, he comes up short. "Set me afire," writes Blake, "pummel and bludgeon me, cut me to bits, stab me, shoot me, do what you will in the worst ways, but none of it could come close to making me feel things as cumulatively horrifying as what I've experienced through my years in solitary."

Other authors in the collection describe abusive conduct by callous guards, including rape and a forced in-cell abortion, forced feeding through a nasal tube, interference with mail and visitation, inadequate amounts of food, and air temperatures that are either freezing or scorching, never in between. Cells are flooded regularly. There is no programming, books are limited if available at all, and medical care is substandard.

Imagine living in these conditions, cut off from all humanity, for one day. Add years and decades and the high suicide rate in isolation suddenly makes a lot of sense. Author and scholar Keramet Reiter has said that 50 percent of all prisoner suicides take place in isolation, despite the fact that only about 10 percent of prisoners are held in isolation. Suicidal men and women in isolation have hung themselves, dove headfirst off bunks, and set themselves on fire.

In addition to the essays written by those who have suffered isolation, this collection contains expert analysis of the damage caused by extended isolation. Dr. Terry Kupers, who coined the term "SHU Syndrome" (SHU is an acronym standing for Special Housing Unit, where isolation cells are typically located), contributes his thoughts on the madness found in modern American prisons. Dr. Stuart Grassian examines the way that isolation both causes and exacerbates mental illness. Professor Lisa Guenther considers the "social and sensory isolation" of isolation and pronounces the practice "a living death sentence."

The use of isolation as a penal practice will one day be looked back upon with horror. Proponents of its continued usage cite the security of prisons as the overarching reason isolation continues to be necessary. But students of history will recall that "security" considerations were behind other abusive programs—like the internment of Japanese-Americans during World War II.

Hell is indeed a very small place. Those interested in gaining a better understanding of isolation should pick up this excellent collection. It may be as close as most of us will ever come to understanding isolation, a sentence described by William Blake as "worse than death."