End of Its Rope: How Killing the Death Penalty Can Revive Criminal Justice 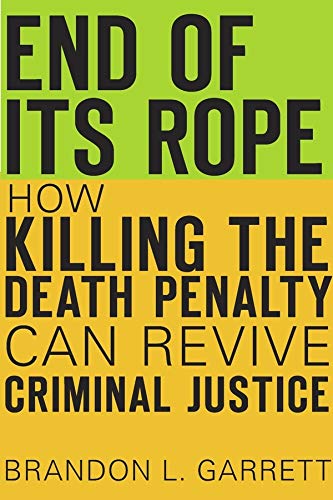 Both confessions resulted from coercive and abusive interrogations by police. At trial, McCollum took the stand and recanted his confession. On cross-examination, he declared his innocence 226 times. After a brief deliberation, the jury came back with findings of guilt for McCollum and Brown. They were both sentenced to death.

Despite maintaining their innocence, McCollum and Brown became poster children for supporters of the death penalty. One 2010 political attack ad in North Carolina declared that Henry McCollum, who "RAPED AND MURDERED AN 11 YEAR OLD GIRL," could be moving into "your neighborhood" soon, if the "criminal coddler" candidate was elected.

McCollum and Brown even became unwitting pawns in a rhetorical war between Supreme Court Justices Blackmun and Scalia over the death penalty. When Blackmun declared that he would "no longer . . . tinker with the machinery of death," Scalia fired back with "[what about] the case of the 11-year-old girl raped by four men and then killed by stuffing her panties down her throat [?]" Scalia went on to declare, "How enviable a quiet death by lethal injection compared with that!"

Not enviable at all, because a few years later, both McCollum and Brown were completely exonerated. After three decades in prison, DNA tests proved that a local convicted rapist and murderer committed the crime. McCollum and Brown, who were nearly mangled by the machinery of death, were released with little more than an "oops" and a check for $750,000 each.

This and many other death penalty debacles are profiled by Brandon Garrett in his tremendous book, End of its Rope: How Killing the Death Penalty Can Revive Criminal Justice. Garrett, the Justice Thurgood Marshall Distinguished Professor of Law at the University of Virginia School of Law, makes the case that the death penalty is on its last legs in the American criminal justice system. Garrett acknowledges the precipitous decline in death penalty sentences—as well as executions—and wonders, why? And perhaps more importantly, what does the fast approaching demise of the death penalty mean to the criminal justice system as a whole?

Garrett approaches these questions in a systematic way. In preparation for the book, he and his law school students gathered and analyzed reams of data that may never have been studied in this manner before. What is revealed in the text are a host of possible explanations for the steep decline in the use of the death penalty in the United States.

Garrett establishes, for instance, that Americans have become more aware of the racial distinctions that often determine who gets the death penalty (mostly black people), and who is spared (mostly white people). Perhaps this is part of why support for the death penalty has dropped in a sizeable way. While 70 to 80 percent of Americans supported the death penalty in the 1990s, only 49 percent do so now.

Other possible explanations include a drop in crime, the rise of life without parole sentences, evidence that the death penalty is not the deterrent we thought it was, greater oversight of death cases by federal courts, and the wholesale abolition of the death penalty in many states.

Looking closely at the data, however, Garrett concludes that none of these sufficiently explain the decline in the death penalty. Instead, Garrett argues that the biggest driver of the decline, and the biggest difference maker in individual cases, is the presence of high-quality defense attorneys.

In case after case, Garrett illustrates the damage that can be done by ill-prepared and incompetent defense attorneys. He also establishes the great difference that high quality lawyering makes on death penalty cases. Indeed, Supreme Court Justice Ruth Bader Ginsburg once said, "people who are well represented at trial do not get the death penalty."

This point is important because it raises questions of fundamental fairness. If high quality representation can literally mean life or death, is there not an obligation on the part of the state to ensure its presence in the courtroom? Garrett argues that the moral and constitutional answer to this question is yes.

Regardless of the reason for the decline in the use of the death penalty, there have been consequences. One significant consequence examined by Garrett is the skyrocketing imposition of life without parole sentences. LWOP situations are often referred to as "the other death penalty," and rightfully so. Death row may be shrinking, but "life row" is growing fast. Garrett argues that reforms are needed here, starting with better lawyering. After all, Garrett says, "if decent lawyering can undo the death penalty, what does that tell us about all the people who do not get decent lawyers and receive life sentences?"

Ultimately, the factors that have led to a death penalty decline apply equally to the entire criminal justice system. Garrett posits that behind all of the practical factors that have influenced the decline are evolving standards of decency. Our improving moral positions on punishment should apply across the board:

“The waning of the death penalty provides a special opportunity to rethink the morality and accuracy of the entire criminal justice system. Now is the time to seize on it. A criminal justice reform roadmap emerges from the fall of the death penalty. The same flaws in lawyering and evidence that afflict death penalty cases also afflict the vast bulk of criminal cases in which the death penalty is never sought. The same tools that are bringing about the death penalty's demise are much needed across our country. There are also special dangers that the end game poses. Pushing punishment down to life without parole, or using other blunt mandatory punishments, may make the system look less harsh, but doing so cannot avoid the inherent challenge of making punishments fit crimes. Instead, we need to better understand the people who commit crimes as individuals and humans.”

Now is the time. But the thirst for vengeance that sits at the very center of the American criminal justice system is well entrenched. One need look no further than the exonerated men and women who remained in prison for decades despite evidence of their innocence to get a sense of how difficult it will be to excise the blood lust from our punishment system.

Thanks to Professor Garrett's thoughtful and precise analysis of the decline of the death penalty, we now have the roadmap for true criminal justice reform. Here's to the hope that policy makers and stakeholders will pick up this superb volume and start the hard work.