College in Prison: Reading in an Age of Mass Incarceration 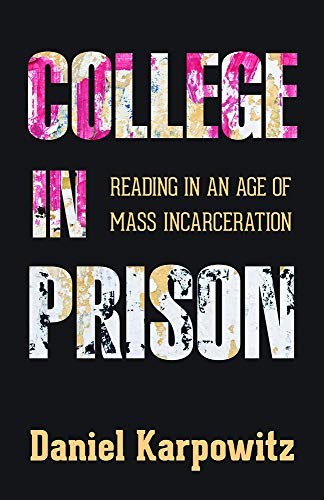 “A must-read for any educator or anyone interested in better understanding the transcendental power of higher education.”

Two American institutions not typically found in the same conversation are the state penitentiary and the undergraduate college. Indeed, what these two institutions offer seem to be antithetical to each other: bondage and freedom, punishment and reward, failure and success. The prison occupies a space and the college occupies a space, and never the two shall meet, right?

Post-secondary education has a tortured history in the American prison, but a history nonetheless. For decades, scholars and policy makers recognized the value of educating the incarcerated. Advanced studies were acknowledged as the one program in prison that worked to consistently provide measurable improvements in the one piece of data on the minds of all players in the criminal justice system: recidivism. But public sentiment turned against the idea of educating prisoners, federal legislation ended the Pell grants that made it possible, and college all but disappeared from the prison.

All was not lost, however. In his new book, College in Prison: Reading in an Age of Mass Incarceration, director of policy and academics for the Bard Prison Initiative and lecturer at Bard College Daniel Karpowitz tells the story of the Bard Prison Initiative, which has successfully brought college back into the prison. Along the way, Karpowitz makes a strong case for the value of a liberal arts education in the prison setting.

The Bard Prison Initiative brought an elite, liberal arts college program directly into the prison system in New York. The program eschewed many of the trappings of the more typical educational opportunities available in prisons. BPI's program is not vocational in nature. Participants do not learn specific job skills or prepare to work in a specific trade. The courses are all college-level, challenging and count toward a degree. As Karpowitz notes, the work involved in the Bard Prison Initiative program firmly avoids the "insidious bigotry" of low expectations.

But is offering prisoners a college education the right thing to do?

From the perspective of recidivism rates, the answer is a resounding "yes." Bard Prison Initiative graduates recidivate at a rate of four percent. National recidivism rates hover in the 50 percent range. If the goal is to keep prisoners from returning to prison, it seems that a BPI-style college education works.

Karpowitz goes much further than such simplistic analysis, however. From the perspective of a skilled educator, he considers the value of a liberal arts education on a much grander scale. Why is such an education important for anyone? What is the value of a college education?

The stories of BPI students and the classroom experiences related by Karpowitz reveal the true value of education. There is much inspiration to be found in reading of the success of prisoners who, through Bard Prison Initiative's liberal arts education, opened their minds and learned to think. Reading the engrossing story of BPI students confirms the inherent value of education, in and of itself.

This argument resonates in Karpowitz's writing. He acknowledges that college in prison will not solve the problem of mass incarceration. But, he notes, "the college inside the prison is an important political space, with implications for the nation at large, even as we work to reduce our generation's overuse of prisons." Providing a liberal arts college education to one of the most marginalized populations in the country makes a tremendous difference in the lives of those prisoners. And the undeniable benefits of a college education spread beyond the prisoner in an exponential manner. Families and entire communities benefit.

Unfortunately, as Otto Kirscheimer once said, "all public policy is irrational, but none is as irrational as criminal justice policy." To Karpowitz, the college in prison experience must be a college, not a prison experience. That is a tall order in today's command and control style prisons. There appears to be room for vocational education, job training and other programs of marginal value, but not for the truly life-changing experience of college, taught by real professors (not poorly trained prison staff or fellow prisoners), involving real work (not dumbed down for a prisoner) and granting an actual degree from a respected institution of higher learning.

Karpowitz goes to great lengths to make this important point. In order to be successful, college in prison programs must replicate the college experience as closely as possible. They cannot, and should not, be thought of as therapeutic programming for the criminal minded individual. Success should not be measured traditionally—recidivism rates should not be used to judge the efficacy of college in prison. This is partly because a college education in prison cannot cure the ills of criminal behavior and incarceration on a large scale, and partly because the goal of college in prison should be the provision of a high quality education and nothing more. To go further renders the prison and college indistinguishable from one another.

This is, of course, nearly impossible. At one point, Karpowitz wonders whether the prison setting distorts and perverts the relationship between a liberal arts college and its (prisoner) students. The answer is simple: of course it does. Like an infectious disease, the prison taints everything it comes into contact with. But any college program in a prison must still endeavor to separate from the prison as much as possible. As BPI students demonstrate, even an imperfect distinction between college and prison leads to some incredible outcomes.

College in Prison is a powerful argument for the use of college in prison as well as an engrossing story of the prisoner-participants in the Bard Prison Initiative and their success. A must-read for any educator or anyone interested in better understanding the transcendental power of higher education.