God in Captivity: The Rise of Faith-Based Prison Ministries in the Age of Mass Incarceration 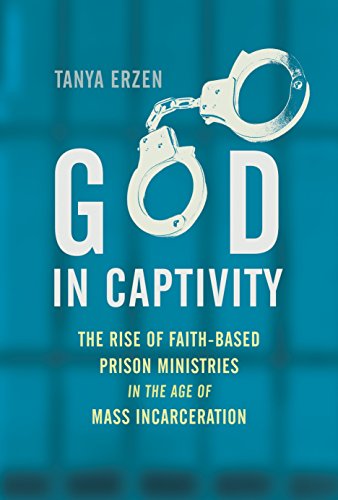 The body of scholarship dedicated to analyzing, understanding, and changing America's enormous carceral complex is growing fast. What has enabled the deep entrenchment of an industry devoted entirely to human bondage and suffering? What role does a long history of slavery and racism play in the current makeup of the prison population? These questions and many more are being carefully studied by researchers and scholars nationwide.

One subject that has not received the necessary critical attention is a loaded one: What roles do organized religion and faith play in the carceral state? Perhaps more importantly, what roles should they play?

Tanya Erzen, associate professor of religion and gender studies at the University of Puget Sound, takes these issues head on in her timely book, God in Captivity: The Rise of Faith-Based Prison Ministries in the Age of Mass Incarceration. For those who operate within the carceral complex, this book is an important read. For those who seek to better understand the complicated ways in which religion and incarceration mingle, it is a required read.

Faith-based ministries have been present in American prisons, in one form or another, since the beginning. In fact, as Erzen points out, the modern penitentiary, as well as many of its accoutrements (including solitary confinement), has its basis in early American religious ideals relating to the gospel and the relationship between God and man. But prisons are state-run institutions, and America is a country with a constitutional mandate that religion and the state remain separate.

The tension between the concept of separation of church and state and the evangelical nature of most faith-based prison programs is a significant theme in Erzen's book. Religion is present in all prisons, of course. But the choice of religion often is not.

This is because the lion's share of faith-based programs in prison are Protestant, evangelical-style ministries. These programs often control the only access to important aspects of prison life, from both the prisoner's perspective and the administrator's perspective. Education, health care, privileges, and programming are often overseen in some way by faith-based ministries with an agenda. That agenda is, of course, to spread the religion through evangelical means.

As Erzen reports, "[c]onservative Protestants have the monopoly on prison ministry." Further, "evangelization to a captive population of prisoners inevitably raises ethical and legal matters; it's a coercive use of power." Indeed, the stranglehold that evangelical Protestants have on the prison ministry often leaves other religions, including mainstream beliefs that pre-date Christianity, out in the cold. Muslims, Buddhists, and Jewish prisoners are shortchanged across the board when it comes to access to services and programs, and sometimes to the religion itself.

In addition to underscoring the difficulty of keeping overzealous missionary-style religions from hijacking religious freedom from prisoners, Erzen analyzes what role faith-based ministries play in the growth and sustainment of the carceral state. It turns out that faith-based ministries generally promote the continuity of mass incarceration. At first blush, this seems like a difficult case to make. After all, what business would followers of Jesus Christ have in ensuring the maintenance and growth of an institution dedicated to exacting retribution and pain on a child of God?

Plenty, says Erzen, when your belief system is "a contradictory hybrid of New Testament forgiveness and Old Testament vengeance." To the evangelical faith-based ministry that exists in most American prisons, "justice" requires punishment. While this belief system does not see people as necessarily evil, it does subscribe to the idea that forgiveness only comes after punishment. Indeed, Erzen posits that faith-based ministries employ a "logic that punishment is redemptive, that a carceral church produces people with changed hearts, and that faith-based ministries and seminaries are necessary to supervise the reformation of the body and soul."

This is a carceral church that is wholly unconcerned with social justice. The soul is the thing. One is not hard-pressed to see the comparison between the institution of slavery, which was once strongly supported by evangelical Protestant ministries, and the institution of human warehousing.

Faith-based ministries have a place in modern prisons. There is no doubt that lives are changed for the better as a result of interaction with such ministries. But progress must be made away from the belief that prisons are a necessary part of redemption and towards a greater understanding of why people go to prison in the first place.

Erzen lays down the gauntlet in concise and straightforward terms: "If we consider people in and outside prison as citizens, can we justify the way we warehouse and treat them? If prisoners' lives truly mattered, would we send them to places where youth barter sex for food; where people go blind and die of medical neglect; where someone will be raped; where women are separated from their children forever; where a woman is shackled during childbirth; where a transgender, gay, or gender-nonconforming person is subject to unthinkable abuse; where people are moved hundreds of miles from their families; and where they are driven mad in solitary confinement cells for years?"

These are the realities of the American incarceration complex. What would Jesus really do?