America's Jails: The Search for Human Dignity in an Age of Mass Incarceration (Alternative Criminology) 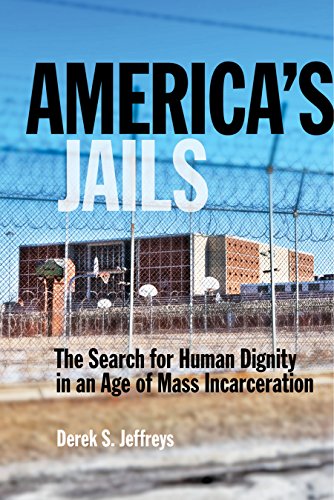 The United States of America is home to over 3,000 jails. On any given day, these jails hold over 700,000 people. More than 12 million individuals pass through an American jail each year.

American jails have a sordid history. Brutality, wanton violence and filthy conditions have been the norm since the establishment of the first jails. Hundreds of years have passed—centuries—and the conditions in our jails remain abhorrent. As Margo Schlanger wrote in the April 2003 edition of the Harvard Law Review, jails are well known as the "worst blight in American corrections."

University of Wisconsin professor Derek S. Jeffreys knows the American corrections system. For nearly a decade, he gave volunteer philosophy lectures in large, maximum-security prisons. He has also lectured in a county jail. And in preparation for his powerful new book, American Jails: The Search for Human Dignity in an Age of Mass Incarceration, he was granted unprecedented access to the Cook County, Illinois jail—one of the largest, most notoriously decrepit and dangerous jails in the nation.

What Jeffreys found in Cook County was a "brutal, overcrowded, confusing and filthy place." He describes the inglorious history of the jail, which has included lawsuits over group strip-searches wherein nude men had their rectums searched while they were packed so tightly that they touched each other, and menstruating women were forced to bleed on the floor. He discussed the abuse that Cook County guards are renowned for visiting upon detainees, which has included forcing nude men up against each other while screaming homophobic slurs and threatening them with aggressively barking attack dogs. He highlights the appalling filth that Cook County detainees are forced to live in—"Cells and recreation areas were . . . crawling with mice, flies and cockroaches."

Reading Professor Jeffrey's account of the conditions in Cook County, one is struck by the possibility that the jail is nearly indescribably awful. Jeffreys, who is a prolific and highly skilled writer, seems to come perilously close to running out of adjectives to describe what he has seen.

A sample from Chapter 1, which is titled "Degradation and Disorientation": Miserable, brutal, disturbing, broken, dehumanizing, degrading, demeaning, frightening, humiliating, lawless, filthy, dangerous and ugly. In short, the Cook County jail, which is representative of many other American jails, is "a host of [] horrors." In a word: hell.

"From the moment people enter the Bullpen, they are verbally and physically accosted," writes Jeffreys. "They find themselves in conditions that most people would find revolting. Crowded in with a mass of humanity, they lose all privacy. They face the constant threat of violence from other inmates. Medical care is substandard, and inmates often cannot convince the authorities that they need it. They often don't know when their hellish experience will end, and have little idea about when they can resume something of a normal life outside the jail."

Professor Jeffreys teaches Humanities and Religion at the University of Wisconsin, and it is this academic background that drives the inquiry and argument of his book. American jails have always been, and continue to be, awful and inhumane places—the question is, Why? What does it mean that the citizens of this county allow the abusive treatment of pretrial detainees, who are presumed innocent?

Jeffreys argues that the American history provides the necessary context for understanding modern jails. As a country, we have long treated the marginalized with violence, degradation and inhumanity. We remove and warehouse undesirables of all kinds. The undesirable person, the jailed person, is subject to stigma. The stigma attached to an incarcerated individual renders him or her no longer a him or her, but an object. And an object is not entitled to dignity.

I observed an example of this disassociation of humanity at Federal Correctional Institution Petersburg Medium in 2018. A housing unit officer walked up to a lieutenant and reached out to shake his hand. The lieutenant responded by holding up his hands and saying, "Don't touch. I have inmate all over me." This is how many correctional administrators view those in their custody: as dirty and less than human. Ironically, prisoners often view prison guards and administrators as the same way.

Jeffreys argues that disgust, contempt and fear blind us to the dignity of others. In the American jail, these are powerful concepts. Human beings are disgusted by dirty objects, insects and bodily functions, but are also easily disgusted by the morally repugnant criminal, such as the sex offender or the drug addict. History shows large swaths of people have felt the same way about groups that they deemed repugnant, such as Nazis towards the Jewish people and even Americans towards interned Japanese.

In jail, disgust leads to contempt, and contempt leads to inhumane treatment. The degrading conditions in jail lead to further disgust. It's a self-fulfilling prophecy, wonderfully summed up by Donald Leach, former vice president of the American Jail Association, who once said, "Inmates don't have a constitutional right to underwear."

Fear is also capable of overwhelming our ability to see other humans as people who are deserving of dignity. Jeffreys argues that it is fear that drives the total incapacitation of those we find undesirable. Risk assessment, money bail and civil commitment are all driven by fear. When fear acts to remove personhood, what happens to a jailed (non)person matters less than the excommunication of the (non)person.

Professor Jeffreys provides a cogent and highly credible explanation for why American jails are brutal places where humanity is in short order. But it is his argument that all people—including the jailed detainee—possess inalienable inherent dignity that renders his book a powerful and important addition to modern criminal justice scholarship.

Something bigger than the law or constitution is violated when we treat jailed detainees as valueless objects, something even arguably more important than basic human rights. Human dignity is violated—the very fundamental sense of how we should treat others. In Jeffreys' words, "Forcing people to live in sewage and menstrual blood seems inappropriate to their status as human beings."

Jeffreys argues that oversight, monitoring and transparency are crucial to restoring dignity to the American jail. Governmental monitors and investigative journalists should play a part in such oversight. Legal challenges to jail condition should be encouraged and supported. Efforts should be made to modify the pretrial detention decision-making apparatus.

These are all excellent suggestions, but the success of any reform is dependent on people giving a damn about what happens to the millions of human beings incarcerated in American jails each year. We must not, urges Jeffreys, accept the "assault on human dignity" that takes place every day in our jails and prisons. The same can be said of our prisons as well.

"Even among those accused of the most heinous crimes, the dignity of the person remains," writes Jeffreys. "Even among those most damaged by violence or mental illness, the beauty of the human person exists. It remains our task to remember the basic truth of inherent dignity, and to struggle to prevent our jails from obscuring or denying it altogether."