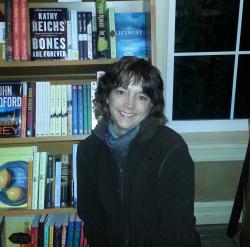 Karen Winters Schwartz was born and raised in Mansfield, Ohio. She wrote her first truly good story at age seven. Her second-grade teacher, Mrs. Schneider, publicly and falsely accused her of plagiarism. She did not write again for 40 years.

Educated at Ohio State University, both Ms. Schwartz and her husband have shared a career in optometry in Central New York's Finger Lakes while raising two daughters together.

Ms. Schwartz is the president of NAMI Syracuse (National Alliance on Mental Illness), a strong advocate for mental illness awareness, and a sought-after speaker at health association events and conferences across the country. Ms. Schwartz knows firsthand the devastation that mental illness can wreak on a family. She has talked to hundreds of families who have dealt with the frustration of a broken mental health care system. She has experienced the price of stigma and has felt the isolation that ignorance, misunderstanding, and judgment can inflict on everyone involved. She knows how these misconceptions delay and thwart necessary treatment—at its best leading to loss of jobs, productivity, and relationships, at its worst leading to tragedies such as suicide, violence, and mass murder. She has also experienced the joy of the recovery of a loved one, stressing early detection and treatment as the key to this success.

Her widely praised novel on mental illness, Reis’s Pieces: Love, Loss, and Schizophrenia was released by Goodman Beck Publishing in the spring of 2012. The follow-up to her critically acclaimed debut, Where Are the Cocoa Puffs?: A Family’s Journey Through Bipolar Disorder, Reis’s Pieces is not only an honest and engaging story but also an advocacy tool, an educational tool, and a comfort to those dealing directly and indirectly with mental illness.

Through her books Ms. Schwartz opens up discussions about the need for empathy and the impact of the negative stigma associated with these neurobiological brain disorders. Through literature, she educates while entertaining, elicits empathy while telling a great story, and advocates by reaching those who just don’t “get it.”

Where Are the Cocoa Puffs?: A Family's Journey through Bipolar Disorder

All Together Now: A Novel

“refreshing and entertaining, perfect for that warm beach or cozy fireplace.”

Sex Outside the Lines: Authentic Sexuality in a Sexually Dysfunctional Culture

The three-letter word that gets everyone’s attention.

The Sweetheart Deal is a solid first novel by Polly Dugan, which in spite of the sweetness of the title, never strays toward sappiness.

The World's Largest Man: A Memoir

“You don’t need to be a hunter or even a man to enjoy this exceptional memoir.”

May 4, 2015
Reviewed by:
Karen Winters Schwartz

Ambassador Eleni Tsakopoulos Kounalakis, who quickly becomes “Madam Ambassador,” starts her memoir with a bang. Shortly after starting her post as the first Greek-American to serve as a U.S.

“For those who want to understand the inner workings of a self-mutilator, Sharp is an excellent read.

The Price of Silence: A Mom's Perspective on Mental Illness

“The Price of Silence is a concise, heartfelt addition to books about mental illness.”

Shot in the Head: A Sister's Memoir, a Brother's Struggle

“There may be serious disagreement on how mental illness services should be organized and funded, but what’s now in place is insufficient at best.

Project Personal Freedom: Tips and Tools for a Liberated Life

“. . . a thought-provoking, inspiring journey and an important and welcome addition to the world of self-help books.”­­­

“Ndibe’s writing is sharp. The pacing is excellent. His characters are well-developed. The novel is culturally and politically significant. . . .

Songs for the Deaf

“The extent of Dr. John Henry Fleming’s literary range is unmistakable in this slight little book.

How to Disappear Completely

“In spite of the bad taste left by the last one-third of the book, the depth and the magnetism and the humor of Eric Charles May’s truly unforgettable characters makes this

My Age of Anxiety: Fear, Hope, Dread, and the Search for Peace of Mind

“. . . a quick, beautiful read that will draw out joy just as quickly as sadness, [embracing] both the misery and the magic of marriage.”

The Answer to the Riddle Is Me: A Memoir of Amnesia

Doing Time Outside refers to the painful and difficult period of time spent by a family member or friend of a person incarcerated in a correctional facility.

The Fog of Paranoia: A Sister's Journey through Her Brother's Schizophrenia

“. . . a good source for learning about schizophrenia and its effects on family members.”

The Book of Woe: The DSM and the Unmaking of Psychiatry

Cracked, Not Broken: Surviving and Thriving After a Suicide Attempt

Kevin Hines jumped from Golden Gate Bridge at the age of 19 with the intention of never being able to write again.

Song Without Words: Discovering My Deafness Halfway through Life (A Merloyd Lawrence Book)

“Read this novel not to be entertained by the story, but to be awed by the beauty of the words.”

“What Journey with Julian does provide is hope . . .”

Something About Sophie: A Novel (P.S.)

There is something about Sophie Shepard.

“. . . the writing—in spite of its publisher’s description of the work as a literary novel—comes off as stilted and repetitive . . .”

The More You Ignore Me