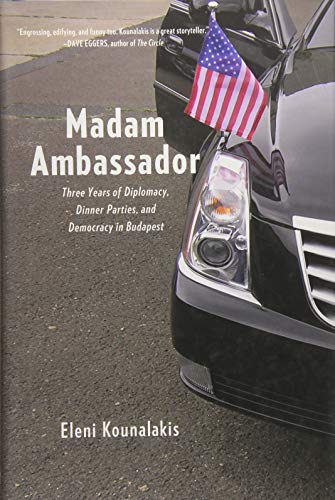 Ambassador Eleni Tsakopoulos Kounalakis, who quickly becomes “Madam Ambassador,” starts her memoir with a bang. Shortly after starting her post as the first Greek-American to serve as a U.S. ambassador, she is invited to participate in a wild boar hunt in the countryside near Budapest, Hungary. She is—not surprisingly—the only woman in the hunting party; she’s also the only hunter of the day to successfully bring down a wild boar.

This political memoir of her time as an American ambassador in Budapest from 2010 to 2013 has moments of insight, humor, and forays into Ambassador Kounalakis’s personal life, but there is not nearly enough of this sort of thing. The text is bogged down and almost brought to a halt with a vast amount of political and historical retelling. Although the inclusion of these facts was likely necessary and for the most part interesting, this memoir might have shone brightly if all this had been pared down.

Feelings and fears and faux pas along with sights and sounds and smells are the building blocks to excellent memoir writing. Ambassador Kounalakis captures these elements extremely well in her first chapter. If only she had carried that magic throughout the book.

Some of the better scenes in the book are those set in social situations. Ambassador Kounalakis’s recounts the time her young sons met the former king of Greece at a small dinner party. When told by the hostess that they were going to meet a real king, the boys balked. “‘Kings are bad!’” her seven-year-old said a bit too loudly. What the hostess didn’t know was that their parents, Ambassador Kounalakis and journalist Markos Kounalakis, had told the boys: “‘Once, there were only kings, and they could tell everyone what to do. They made all the rules and could change them at any time. That was terrible for everyone except the king! Now we have presidents and senators, and they represent the people instead of ruling them.’”

Without being overly cocky, she narrates those moments as an ambassador that made her most proud while not being the least bit shy about sharing the moments that just didn’t go so well. She also does a fine job painting the picture of present-day Hungary and the attitudes of its people as they transition from post-communist to a democratic society.

One nice example of this is the introduction of Starbucks into the country. One of the biggest challenges for the newly trained Hungarian baristas was getting their Starbucks’s customers comfortable with giving their names when ordering coffee. Ambassador Kounalakis goes on to say:

“As the Starbucks anecdote shows, communism’s legacy continued to reverberate in the hearts and minds of the Hungarian people. It didn’t take long for me to realize that civil society in Hungary was still very weak and that citizens had only limited participation in the political process.”

At the end of the day, Madam Ambassador lacks the depth to be all that memorable, but is most definitely a worthwhile read for those interested in a cursory history of Hungary, diplomacy, and a peek into the life of a very nice woman and an exceptional ambassador.