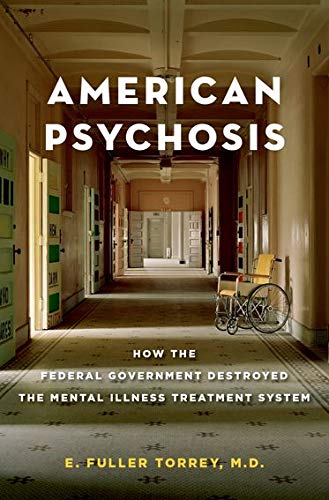 “There may be serious disagreement on how mental illness services should be organized and funded, but what’s now in place is insufficient at best. Society is doing a grave injustice to the seriously mentally ill population and to local communities.”

“How could so many well-meaning professionals have been so wrong and been complicit in creating such a disaster?”

In many eyes Dr. E. Fuller Torrey is an important and highly respected icon in the mental health care field. In a few others, he is the devil incarnate. Well known for his writing, his work in psychiatry, and his research Dr. Torrey has been a long time proponent of mandatory treatment of the seriously mentally ill—for the good of the individual and the good of society.

In his newest book American Psychosis: How the Federal Government Destroyed the Mental Illness Treatment System Dr. Torrey begins by recounting what has led to the current and grossly inadequate federal mental health care system in order to “understand how we got where we are.” He then emphatically and candidly provides an insider’s perspective of the “Dimensions of the Present Disaster.” He ends this small text with some solid feasible solutions.

In 1941, Ambassador Joseph P. Kennedy authorized a lobotomy for his eldest daughter, Rosemary, who was born mildly retarded and suffered schizophrenia-type symptoms as an adult. Something went terribly wrong with the procedure, leaving her profoundly debilitated. Although never publically acknowledged, this catastrophic lobotomy was at least partly what motivated President John F. Kennedy to initiate a federal mental health care program in 1963. This, and the development of useful psychotropic medications, Dr. Torrey explains, kicked off deinstitutionalization, resulting in the loss of 432, 633 beds in state psychiatric hospitals since 1955.

“. . . discharging hundreds of thousands of mentally ill individuals from state mental hospitals was both logical and humane. Thus, deinstitutionalization per se was not the mistake. The mistake, rather, was our failure to provide continuing treatment and rehabilitation for those individuals once they left the hospitals.”

“. . . there was no master plan, no coordination, no corrective mechanism, no authority, no one in charge.”

And all of the above is still true today.

Deinstitutionalization and the failure of putting into place effective and adequate numbers of community mental health centers which President John F. Kennedy originally proposed, resulted in mentally ill individuals living on the streets, in nursing and board-and-care homes, encamped in their family’s basements, and in jails and prisons. There exists no organized funding, other than Medicaid—which was never set up for such a thing—and no single unit of government is taking responsibility.

In one proposed solution, Dr. Torrey suggests “giving all Medicaid and other mental illness-related funds to the state or county department of corrections. Because the police and sheriffs have de facto become the frontline mental health workers and the jails have become the primary psychiatric inpatient units, why not let corrections take complete responsibility, along with the funds, and measure the outcome?”

There may be serious disagreement on how mental illness services should be organized and funded, but what’s now in place is insufficient at best. Society is doing a grave injustice to the seriously mentally ill population and to local communities.

More and more—50 years later—the effects of deinstitutionalization and the present system of care are obvious. Talk to any family member who’s tried to get their loved one off the streets or out of jail, talk to any individual who has tried to negotiate the mental health care system; and regardless of how they may feel about an individual’s civil rights and forced treatment, they will all agree the system just isn’t working.

American Psychosis is spot on and a must read for anyone involved in mental health care and anyone in government. In fact, anyone living in American society should read this book. It’s time to recognize and acknowledge this issue; the whole of society is affected.

As Dr. Torrey so poignantly quotes from Frank L. Wright Jr’s Out of Sight, Out of Mind written in 1947: “Throughout history the problem of the mentally ill has been dodged.” “—we have segregated them, ostracized them turned our backs on them, tried to forget them.” “We can no longer afford to disregard their needs, to turn a deaf ear to their call for help. We must come face to face with the facts.”

Dr. Torrey is correct: It is time to finally do so.