The Book of Woe: The DSM and the Unmaking of Psychiatry 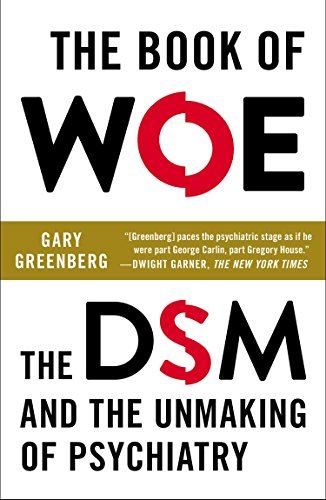 “If this—the ability to match symptom with drug—were the only claim that psychiatry made, if psychiatrists stopped pretending that they know the proper names for our suffering, then perhaps the profession could finally free itself from the prison it has built.”

This would be the profession of an “honest psychiatry” claims psychotherapist Gary Greenberg in his masterful, eloquent, and biting The Book of Woe.

The Book of Woe is the intriguing “tale” of the history of the Diagnostic and Statistical Manual of Mental Disorders—the DSM—and the agonizingly arduous, political, and perhaps financially motivated construction of the fifth edition.

This 900+ page “bible” of psychiatric diagnoses was first released in 1952 by the American Psychiatric Association (APA) and is a compilation of the diagnostic criteria of mental disorders, meant to separate “normal” from medically ill.

Dr. Greenberg takes great pleasure in humorously and efficiently throwing his well-researched barbs at psychiatry while journalistically balancing those barbs with a measured respect for the profession.

Dr. Greenberg’s greatest pleasure seems to come when he directly quotes his friend, psychiatrist Dr. Allen Frances, with regards to defining mental illness. When asked his thoughts about the content of the DSM-IV—of which Dr. Frances was the chair of the task force that produced the manual—Dr. Greenberg quotes him as saying:

Besides the fact that it’s just the newest version of bullshit, Dr. Greenberg’s main beef with DSM-5 seems to be the expansion of the diagnostic criteria, thus lowering the threshold of what is considered normal in the worried well, the walking wounded, and the social deviants—the fear being that medicalizing human behavior and suffering will lead to the increased use of psychotropic medications.

A win-win for the profession of psychiatry and big Pharma, but this may not be so good for the millions who are suffering and dying early from the serious side effects of some of these medications.

Capitalism “has spawned a psychiatry that can’t help giving us more and more diseases, at least if it wants to meet the economic, if not scientific, demands of the day.”

But not all his barbs hit the mark. Early in the book, Dr. Greenburg uses the example of David Rosenhan’s experiment in which he sent healthy graduate students into the ER all complaining that they were hearing voices to prove his point that “. . . psychiatrists didn’t seem to know the difference between sickness and health.” In fact, this example proves consistency: All of the graduate students who were lying about their symptoms were given the same diagnoses of schizophrenia.

And at the end of the book while arguing the point that psychiatry is not alone in its inexact science and lack of a single causative pathogen, Dr. Greenberg says: “There are plenty of illnesses that are described purely in terms of symptoms—chronic headache, for example, or idiopathic neuropathy . . .”seemingly contradicting his earlier argument.

But it’s not just psychiatry Dr. Greenberg’s barbs hit and stick deeply into. Of his own profession as a professional counselor he says:

“. . . we, by and large, get to minister to the walking wounded. Thanks to Bob Spitzer’s expansive approach to the DSM, we can casually jot down Generalized Anxiety Disorder or Adjustment Disorder and talk (on insurance tab) with our patients about the meaning of life, while right down the hall psychiatrists are making momentous decisions about whether a man who thinks his bones have been sucked out of him is bipolar or schizophrenic and which drugs to prescribe.”

What Dr. Greenberg does so brilliantly is to leave nothing sacred. He shoots his barbs as straight as humanly possible (because he is after all human), and using that rare “old time” journalistic ability, he sticks his tongue into his cheek and tells the facts and the fallacies leaving no one unruffled:

“While they (psychiatrists) have to take the DSM at least a little seriously, we (psychotherapists) can pretend it doesn’t exist, give it the cynical bureaucrat’s shrug, denounce it even as we cash those insurance company checks. And when it comes time to revise it or explain it or defend it, and its flaws are once again open to scrutiny, it’s the psychiatrists who take the heat.”

But by repeatedly suggesting that the illnesses listed in the DSM are made up, financially motivated manifestations of bureaucracy (the DSM-IV earned a hundred million dollars, and the DSM-V is ranked #4 on Amazon's bestsellers list at the time of this writing—priced at $85.73 for the paperback), and by stating that this text was put together by a scrambling group of “Keystone Kops,” namely the APA, Dr. Greenberg treads very close to doing a grave disservice to those suffering from these illnesses. Regardless of what you call these conditions, Dr. Greenberg never seems to fully acknowledge the devastating effects they have on the patients and their families.

By being swept away by the pleasure of his rampage against the DSM and the APA, Dr. Greenberg deemphasizes his point that sometimes putting a label on something gives the individual a foothold, an identity on which to build recovery—even if it is bullshit.

And that the vast majority of psychiatrists work tirelessly to do what’s best for their patients, using the DSM not as a “bible” but as a source for medical codes for insurance reimbursement in a world where financial reality is just that—reality.