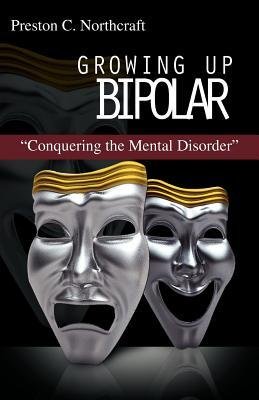 This tiny text is really much more of a manual than a memoir geared toward middle and high school-aged students.

Preston C. Northcraft uses his own experience with bipolar disorder as a template to offer up helpful tips on how to negotiate the world while dealing with the symptoms of his mood disorder.

Honest, but lacking any true meat or bite, Growing Up Bipolar would be a good resource to add to the library of self-help books available for any young person struggling with the early onset of mental illness.

Set up in small chapters, Growing Up Bipolar does a fine job outlining some of the major symptoms of the disorder, the negative and positive aspects of living with a mental illness, social and family issues, psychiatric care, and the importance of proper medication and treatment.

In Chapter 5 on diagnosis, Mr. Northcraft describes the all too frequent and typical misdiagnosis by his first psychiatrist. Having decided that her young patient was only suffering from depression: “She then sent me on my way with a practical anti-depressant drug commonly used by many people: Paxil.”

This unfortunate misdiagnosis and treatment, especially common in young people, almost always causes a worsening of symptoms. By taking the administered antidepressant alone, Mr. Northcraft was flipped quite rapidly to mania:

“On a family trip to West Virginia, not long after I was diagnosed ‘clinically depressed,’ I blew up and had a panic attack in the car. I got so mad and out of control that I actually kicked the windshield in front of me and severely cracked the glass.”

Only after a more appropriately thorough interview with his doctor was Mr. Northcraft given the proper diagnosis and treatment with a mood stabilizer.

Although marred with typos and amazingly short, Growing Up Bipolar is a hopeful and encouraging little book. The author drives home the importance of self care without being preachy. He presents many useful coping skills. He emphasizes the positive influence and support he received from his family. And he brings to light the terrible guilt individuals suffering from bipolar disorder can inflict and endure.

Perhaps the best way to sum it up is with Mr. Preston’s own words in the epilogue: “I hope you have found my book useful. I also hope you’ll take my advice and use it to help those you know who are bipolar or have some other form of mental illness or disorder.”