The Answer to the Riddle Is Me: A Memoir of Amnesia 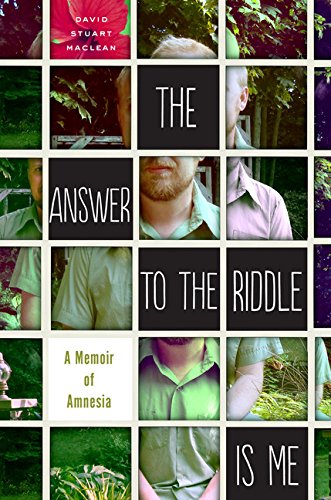 Twenty-eight-year-old Mr. David Stuart MacLean woke up standing on a bustling concrete platform in a train station in India. He had no idea who he was.

“‘There. There.’” A kind tourist police officer was by his side.

“‘You foreigners come to my country and do your drugs and get confused. It will be all right, my friend.’”

And just like a newly hatched gosling Mr. MacLean had his identity.

“. . . this police officer had let me know who I was and that I wasn’t to be trusted. I knew who I was. He had given me a key to my identity. I didn’t have a name, but I now knew what kind of person I was.”

Beautifully and masterfully written, The Answer to the Riddle Is Me is as inspiring as it is heartwrenching, as frightening as it is funny, and as memorable as it would be a relief to forget.

Mr. MacLean dives right into the terror and the humor of his psychosis as he becomes increasingly more ill, ending up in a psychiatric hospital in Hyderabad, India.

“. . . there was something lovely and horrid in my hallucinations.”
The universe was created by Jim Hensen in a studio in Burbank—of that Mr. McLean was certain. The rest of the riddle God had given him to work out involved masala dosa—“the wide, thin rolled-up pancakes of southern India.”

And this became Mr. MacLean’s mantra—fuck masala dosa—as he struggled over the next few weeks to purge his body of the anti-malarial Lariam which was given to him when he traveled to India on a writing fellowship. Mr. MacLean unwittingly became just one more victim of the most severe side effects of this commonly prescribed drug.

Never fully recovering, and with the help of family and friends he does not truly remember, Mr. MacLean is forced to recreate himself. And he does so in a disturbing, moving . . . and very human way.

“Faking sanity isn’t as hard as it might seem.

You just have to shut up.”

A journey into the darkest, deepest crevices of the soul, this is a book that must be read, contemplated, and then read again.