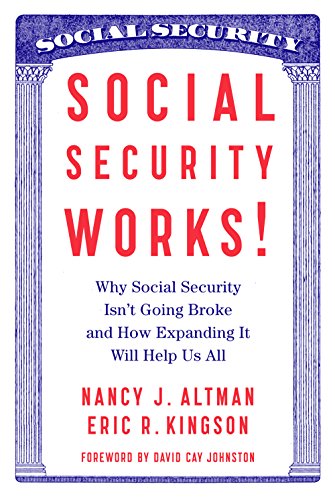 Social Security Works! is a concise compilation of the history, configuration, and the measured success of our present Social Security system, along with a persuasive proposal for its expansion.

Both Altman and Kingson served as staff advisors to the 1982 National Commission on Social Security Reform. Altman is a lawyer, the author of The Battle for Social Security, and chair of the Pension Rights Center. Kingson is a professor of social work at Syracuse University and co-author of several books dealing with the politics of Social Security.

The authors are successful in debunking a number of misconceptions regarding Social Security. From its conception, Social Security has been attacked by certain factions of the government. Altman and Kingston propose that “By distorting, obscuring, and flat-out lying, the enemies of Social Security have succeeded in persuading many millions of people that Social Security is on the verge of collapse, threatening to bring down the whole country.”

It’s important to note that in spite of the belief that Social Security is going broke, “numerous polls show that Americans of all political affiliations—Republicans, Independents, Democrats, self-proclaimed, and progressives—support our Social Security system by large majorities.”

Americans don’t want benefits owed to their grandparents and parents cut. They are more than willing to contribute to this Social Security. These benefits matter to Americans who want to protect “against the economic devastation that death, disability, and retirement might otherwise poise.”

Social Security is in fact an important stabilizer of the economy that can “help stop the collapse of the middle class, lessen the pressure squeezing families from all directions, and help end the upward redistribution of wealth that has resulted in perilous levels of inequality.” Therefore, there is a growing number of politicians and policy makers—including Altman and Kingson—who are calling for the expansion of our Social Security system.

Altman and Kingson stress that Social Security is an earned benefit which is based on the hard work—it is not an “entitlement” or governmental handout. “Social Security is insurance, not welfare.” The $2.8 trillion surplus that is now present in the Social Security system is secure and if properly handled will continue to grow. Also paid benefits do not add a penny to the national debt.

The final chapter of Social Security Works! is a plea to take action, to not be fooled by those who talk about “saving” or “fixing” Social Security, and to “demand straight talk from those who have been elected to serve us.” Social Security helps share the “burdens and bounty of our great nation,” and provides “dignity to all persons throughout their lives.”

Social Security Works! is an important addition to books on current affairs and should be a mandatory read for all Americans.