Sex Outside the Lines: Authentic Sexuality in a Sexually Dysfunctional Culture 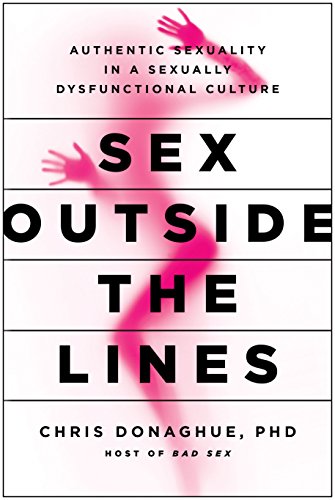 The three-letter word that gets everyone’s attention.

Even if the word elicits puritanical anger or discomfort, the majority of people will continue reading this review because it began with that one simple word.

That three-letter word is perhaps one of the most complex and emotion-inducing words in the English language. But should it be?

Dr. Chris Donaghue states that, “We live in a world where sex is under attack.” “. . . a cultural obsession” which “is constantly in our headlines, in the form of sex addiction, political sex scandals,” “sexting,” “celebrity marriages, divorces, and cheating scandals.”

In Sex Outside the Lines, Donaghue strives to “rescue sex from the oppressive and violent place” and put it in a place of shameless pleasure and joy, where self-acceptance is key and “normal” is not the goal.

In American society “normal” and maturity are measured by one’s ability to fall in love with the opposite gender, get married, have amazing sex which leads to equally amazing children. Then the couples grow old together and ideally die within months of each other. But most people don’t fall within these lines either out of choice or due to what life offers up.

Sex, according to Donaghue, need not fall within these imposed cultural limitations.

Using no ifs or buts, Donaghue asserts that this idea of “normal” is in fact what crushes long-term relationships and sexual pleasure.

“If culture and psychology supported more diverse options for relational configurations, and law and religion sanctioned and legitimized them, we would have healthier relationships.”

He goes on to say—in a very typical Dr. Donaghue sort of way—that “Sexual and relational problems are a result of our culture’s confining heteronormativity, media influence, sexphobia, gender training, and the Western separate-self model that is anti-relational.”

Translated this means that our narrow perspective regarding sexuality is both restrictive toward ourselves and oppressive in our relationships with others—especially those who may defy traditional classifications of sexual behavior.

Donaghue stresses that authentic sexuality is the goal and can be reached “. . . when you can have the sex you want without guilt, shame, labels, or a diagnosis of mental illness.” There is no validity in diagnoses such as sexual addict and sexual deviate. By pathologizing sexual activity that strays from cultural norms we do a great disservice to individuality and create an atmosphere of fear and anxiety.

Rather than embracing and celebrating our capacity for authentic self-expression, “Our culture conceptualizes sex as something to give away, to keep, to protect, to examine, or to control.”

Sex Outside the Lines is not a how-to manual, but rather an excellent, thought-provoking read that examines the culture which created us, the culture in which we live, and sketches out a pathway to a culture free of sexual constraints and limitations.