Something About Sophie: A Novel (P.S.) 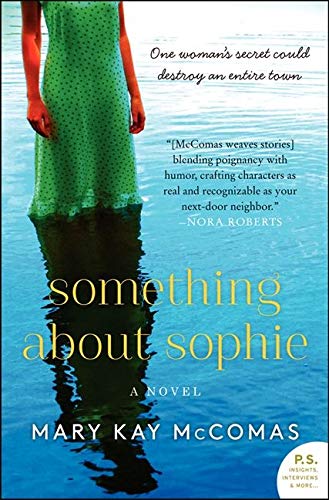 There is something about Sophie Shepard.

It’s not the suspense or the romance that keeps this new novel by Mary Kay McComas clicking along, but Sophie—a feisty redheaded kindergarten teacher who hates to be called perky.

Drawn somewhat unwillingly to a small Virginian town by a series of letters from Arthur, a dying old man she doesn’t know, Sophie arrives in search of answers she’s never really longed for. She’s had a great childhood, and her adoptive parents were all she’s ever known or wanted. Perhaps it was her mother’s death from cancer that changed her mind, causing her to seek answers about her birth parents.

Almost immediately she finds herself in the middle of a small town that lodges more secrets than it does inhabitants.

Sophie has arrived, alas, a day too late. The old man Arthur is already dead. But it wasn’t the cancer that killed him.

Thrust in the middle of a series of events that include murders, disappearances, strange bequests, and a promise of love, this self-proclaimed girl of flint, manages to enthrall most of the town. With the help of an assortment of new friends, Sophie, slowly and unpleasantly, discovers Arthur’s long held secret.

A quibble with Something About Sophie is that she does tend to ramble on while she’s talking first to herself and then to her newfound love interest, Dr. Drew McCarren:

“Women of flint don’t cry until after all the crimes are solved.

‘Why is this happening?’ She tried to sound angry but came off woefully confused. ‘I can’t even pretend anymore that all this doesn’t have something to do with me. It isn’t a coincidence. First, it’s that icky Palmeroy guy following me around. And Maury Weims—he was hostile when he saw me at the drugstore. Hostile. Jesse said it wasn’t personal but it was, I swear. I mean I know when someone’s not happy to see me. He wasn’t and he’s missing. And now Lonny, although…’

‘Lonny was nice, and he liked me. There’s no pattern here. Except for me. Everyone I talk to or have any sort of contact with is either dead, missing, or injured or— Oh, God! Give me your phone. Quick.’”

These long, drawn-out expositions by the story’s various characters dominate this novel. This annoyance is softened, however, by Sophie’s well-executed character development, inclusion of other likable characters, and a healthy sprinkling of snap. Ms. McComas’s notable ability to construct an enjoyable character driven plot is what puts this novel ahead of many in its class.

Reading this novel will not enlighten the reader, answer world issues, prevent sleep, nor solve any of the vast mysteries of life. What it will do is entertain, bring on an occasional smile, satisfy the romantic, and make good the choice of reading rather than watching yet another rerun of “Friends”—or maybe the more apropos “Murder She Wrote.”