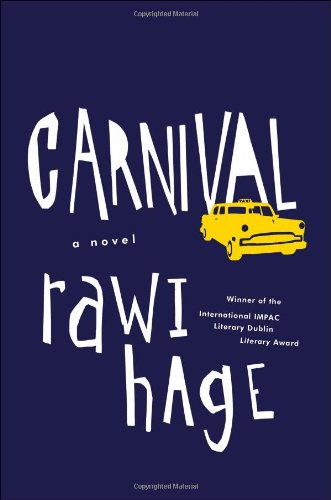 “Read this novel not to be entertained by the story, but to be awed by the beauty of the words.”

Hailing this taxi might just yield the strangest trip anyone has taken for a while.

Canadian author Rawi Hage’s new novel as told by Fly, an immigrate taxi driver in an unnamed city, will arrive in the U.S. this summer. Released in Canada in the fall of 2012, this gritty, rather non-cohesive novel is set up in five acts.

Reminiscent of a Greek tragedy, but lacking the true dramatic structure of Freytag's pyramid, Carnival is a sad, callous commentary on modern civilization. The callousness is softened only by Fly’s occasional and unexpected acts of kindness.

Calling himself Fly because of his tendency to roam the streets for clients, this taxi driver is fraught with verbal diarrhea as he observes his world:

“They navigate the city, ceaseless and aimless, looking for raising arms to halt their flights, for the rain to make them busy, for the surfing lanterns above their hoods to shine like faraway ships leaving potato famines and bringing newcomers.”

While his “spider” counterparts “wait at taxi stands for the dispatcher’s call or for customers to walk off the streets and into their hungry cars. These human insects can be found on city sidewalks rolling newspapers, comparing cars, recalling customers and their own lives. They wait on corners for things to come and ages to pass.”

“And I, who learned how to weigh lives by the size of feet, by the strangles of belts, the heaviness of eyes, and the expansion of cheeks, grew to become a watcher who saw my mother hang and my father fall under the weight of his own beard.”

Translation: Fly grew up in a circus guessing people’s age and weight after his carpet flying father left them to pursue his religious aspirations and his trapeze flying mother hung herself.

“In my early-morning dreams, I invite everyone to take part in my creation and recreation of world events: the universal injustices, the pounding motion of the stars, and all of this anthropophagical existence. In my fantasies, I unveil the ludicrous, the farcical, the senseless weight of histories. I have climbed donjons and walls, slain guardians and monsters alike; I have participated in battles and jerked my hand to the systematic rhythm of war drums, the bleak tunes of marching flutes, and the blowing flags of vagina armies ready to conquer and duplicate the universe a millionfold. I pound and pound until I hear the humming abyss of rosy holes, the cannibalistic cunts of mammals and dinosaurs, the leaping legs of lady frogs, the latent lazy breasts of promiscuous albino sister liberating their kind from condemnation of the sanctus doctrinalis . . .”

Yup, Fly’s masturbating—which he does a lot.

Mr. Hage’s writing tiptoes on the edge of relevant political commentary and grotesque ridiculousness. Weaving together a loose tale told in poignant and entertaining vignettes of the daily life of a taxi driver, Fly entertains himself with both words and debaucheries. He introduces a carnival of prostitutes, drug dealers, strippers, disturbed revolutionaries, wealthy sexual deviants, lonely women, and bearded ladies.

This novel would be close to brilliant if Mr. Hage left it at that. But midway through the novel, as if suddenly realizing he had no plot, the author has the novel take an abrupt Greek tragedy-esque turn. A slew of senseless murders and disappearance of characters leave Fly, and those hailing this taxi, disappointed and flying aimlessly alone.

Read this novel not to be entertained by the story, but to be awed by the beauty of the words.