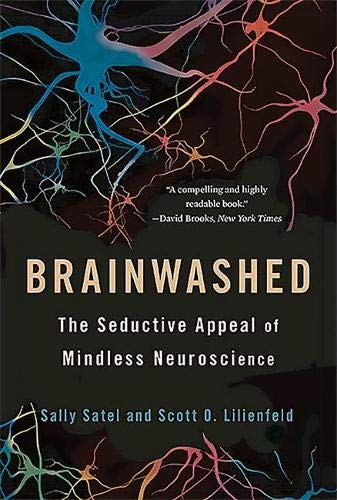 Sally Satel and Scott O. Lilienfeld deserve somewhere between an A– and a B+ depending on the professor’s tolerance for repetition and his or her demand for thorough research documentation. (Sixty-one pages of Notes, which is 23.83% of the total text. A+ for documentation.)

What Dr. Satel and Dr. Lileinfeld are proclaiming in Brainwashed is that science is behind the application of said science; that science being, namely: functional magnetic resonance imaging (fMRI).

Using oxygen consumption and regional blood flow in the brain, fMRI works on the assumption that: “The higher the ratio of oxygenated to deoxygenated blood in a particular area, the higher the energy consumption in that region,” therefore enabling us to map what parts of the brain are being used as we “feel, think, perceive, and act.”

Due to the pretty pictures produced by fMRI and the apparent human need to apply hard facts to things that are (and perhaps should remain) inexplicable, this relatively new technology is being abused and misused. The advertising industry, political strategists, potential employers, drug treatment facilities, criminal prosecutors, and defense attorneys are all turning to this new technology with the hopes of breaking down human behavior to simple and precise interpretations of brain scans.

Throughout Brainwashed there are many cited examples of how the application of this technology affected or potentially affected the legal outcomes of tragic human stories: the brutal murder of Shirley Ann Crook by two teens, the drowning of her children by Andrea Yates, the case of psychopath Brain Dugan. . . .
The use of neural patterns in consumer preference is also well documented with examples such as the Coke-Pepsi challenge, the claim by Apple that “the brains of Apple product users show neural patterns identical to those displayed by the brains of devoted Christians viewing a religious figure or icon,” and the use of fMRI to predict commercial success of new songs by neuroscientists.

As with many aspects of our culture it comes down to money—and there is plenty of money to be made by touting fMRI as the answer to the mysteries of the brain:

• Companies such as No Lie MRI and Cephos Corporation, charge $5000 to $10,000 to private individuals to undergo fMRI lie detection.

• Google, Facebook, Motorola, Unilever, and Disney have hired neuromarketing companies like NeuroFocus, SalesBrain, Neuroco, and FKF Appied Research at a cost of around $40,000 to $50,000.

Putting financial gain—or loss—depending on how you look at it—aside, the very essence of what makes us human—our mind—and our capacity to make our own decisions is being thrown up for neurological review:

“What are the implications of neuroscience for individuals’ freedom of choice?”

“Will our coming to understand how the brain works necessitate a radically new way of thinking about human beings as moral agents worthy of blame and praise?”

Drs. Satel and Lileinfeld provide ample and compelling evidence to the contrary.

“To some neuroscientist and philosophers, you may be nothing more than your brain—and of course without the brain there is no consciousness at all. But to you, you are a “self,” and to others you are a person . . .”

“. . . no matter how dazzling the fruits of inquiry or how clever the means by which they are obtained, it is our values that will guide us in implementing them for good or for bad.”

Drs. Satel and Lilienfield have peppered this text with just enough human stories and what makes us human to prevent ODing on this vast accumulation of research facts, making Brainwashed a solid and worthwhile review of the dangers of applied neuroscience.