Every Man a King: A Short, Colorful History of American Populists 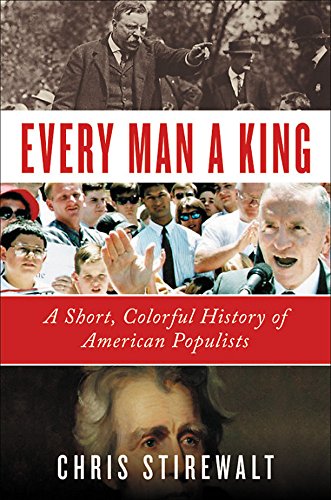 “There is something absolutely American about the notion that you, my friends, are getting screwed.” Thus begins writer Chris Stirewalt’s readable book, Every Man a King. With whimsy and plenty of sarcasm, Stirewalt, a contributor to Fox News and a podcaster, tackles some of the biggest names in the history of American populism. Stirewalt’s book includes portraits of American presidents (Andrew Jackson, Theodore Roosevelt), wannabe presidents (George Wallace, Pat Buchanan, Ross Perot), and one autocratic governor (Huey Long). All of these men, despite representing the left and right of the political spectrum, earned followers because they told the uneasy masses that something was amiss in the republic.

Every Man a King makes one thing absolutely clear: America has lived through some very dangerous times in its past. Despite the hysteria surrounding Donald Trump’s win in 2016, Stirewalt says that today’s era of bureaucratic dysfunction and rising authoritarianism has nothing on the dismal 1930s. This was the decade when people all across the world gave up on capitalism and liberalism in favor of totalitarian visions. In Stirewalt’s narrative, “The Kingfish” Huey Long, a rabble-rouser who knew how to use the radio, represented the moment when many Americans considered collectivism and wealth expropriation as a serious alternative to the New Deal. In the 1860s, differing visions of the legacy of the American Revolution led to the deaths of over one million Union and Confederate soldiers and citizens.

Elsewhere, Stirewalt makes the case that populism, regardless of what form and shape it takes, is a sign that something has gone wrong in the body politick. Most often populism is born out of economic hardship, or when the gaps between the wealthy and the not-so-wealthy expands. Sometimes, as in the case of George Wallace in 1968 and Pat Buchanan in 1992 and 1996) the populist moment is cultural in nature, with millions of “forgotten” Americans trying to fight back against social engineering from isolated elites.

The subtitle of this book lets readers know right away that this brief volume views history through the experiences a major figures. These “big men” are a fascinating lot. However, in certain chapters, Stirewalt actually gives short shrift to his subjects. For instance, the first chapter, which is ostensibly about Andrew Jackson, talks very little about that tough common man and American general. Instead, Stirewalt focuses on how Jackson tapped into the anger of his fellow Scots-Irish immigrants in order to use the Democratic Party as muscle against the Yankee New Englanders of the Whig Party.

Also, in the chapter dedicated to Teddy Roosevelt, Stirewalt mostly discusses how Roosevelt’s bulldozer-like personality and impatience with Congress’ inability to pass through all of his progressive reforms helped to solidify the Republican Party as the party of business and limited government.

Every Man a King is an entertaining look at some of America’s most entertaining politicians. However, while Stirewalt loves to make jokes, he says that populism is serious business. All of the men profiled changed American politics forever, and each one played a role in forming the nucleus of the 2016 election. Stirewalt also has a warning for his readers: populism is a real force that demands attention, but not all populist demands should be met. Stirewalt says that the beauty of U.S. Constitution, which, despite libertarian shibboleths to the contrary, created a strong, central, and activist government, is that it stifles mob power.

In the America of today, Washington has to take populist complaints seriously, while also knowing that voters have a tendency of voting for contradictory things (lower taxes, but high spending for instance). This is the difficulty that is posed by every populist moment.