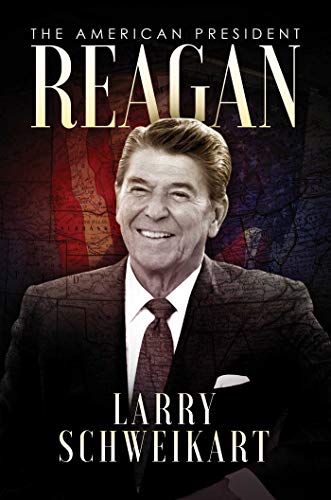 “It has been 15 years since Ronald Reagan’s death and more than 30 years since he left the White House, yet most historians and biographers continue to misunderstand the man and the reasons for his success. Schweikart’s book is a needed reassessment of Reagan by an admittedly sympathetic biographer.”

Ronald Reagan was the greatest president of the 20th century. That judgment will cheer some, baffle others, and produce responses of disdain, disbelief, and even anger among most liberals and professional historians (who are mostly liberal). Yet that is the judgment of Dayton University history professor Larry Schweikart in his new book Reagan: The American President. It is a judgment supported by the historical record.

At home, Reagan’s policies produced economic growth that benefitted most, though not all, Americans. Abroad, Reagan’s policies liberated half a continent, ended the rule of despotic tyrannies in central and eastern Europe, Russia, central Asia, Central America, and the Caribbean, and lessened the risk of nuclear war—all without the costs of a major war.

During Reagan’s years in the White House, the United States rebounded from nearly two decades of domestic turmoil, self-doubt, and global retreat. Reagan’s optimism—his vision of America as a shining city on a hill—was infectious. He restored pride and confidence in Americans who throughout the 1970s were told to resign themselves to inevitable decline.

It has been 15 years since Ronald Reagan’s death and more than 30 years since he left the White House, yet most historians and biographers continue to misunderstand the man and the reasons for his success. Schweikart’s book is a needed reassessment of Reagan by an admittedly sympathetic biographer.

Reagan was, in part, a product of his times and circumstances. Born in Tampico, Illinois, on February 6, 1915, he grew up poor, with an alcoholic father and a religiously devout mother. The values he learned from his parents would stay with him throughout his life. His father Jack, despite his alcoholism, shaped Reagan’s character to appreciate an “ethic for hard work” and to abhor racism. His mother Nelle “worked on [Reagan’s] eternal soul.”

Schweikart notes that from a young age Reagan took an interest in books, ideas, acting, sports, and politics. At Dixon High School he was president of the Dramatic Club and president of his senior class. He wrote poems, stories, and stage scripts. He had a “near-photographic memory.” He was also a very good swimmer and as a lifeguard made more than 70 rescues. At Eureka College he studied economics and continued to act in stage plays.

After college, he worked in radio broadcasting as a sports announcer, demonstrating a talent for speaking and dramatics. He had an easy and likeable manner, and a soothing voice. Politically, he was a Franklin Roosevelt Democrat.

Reagan’s Hollywood acting career began in the 1930s. He made few memorable films. King’s Row was his best movie, but he was popularly remembered most for his role as George Gipp in Knute Rockne, All American: hence his nickname “the Gipper.”

Reagan’s Hollywood years, especially his involvement in the Screen Actors Guild (SAG), shaped his political outlook—especially his hatred of communism. He led a successful effort to diminish communist influence in the union, including becoming a confidential source for the FBI and testifying as a friendly witness before the House Un-American Activities Committee in 1947.

His increased involvement in politics also contributed to difficulties with his first wife, the actress Jane Wyman. Their marriage ended in divorce, which devastated Reagan. His movie career began to fade, but he found success in the rising entertainment field of television.

Reagan was hired by General Electric (GE) in 1954 as a company spokesman and to star in its television program General Electric Theater. Schweikart calls this Reagan’s “apprenticeship for public life.” Reagan toured the country giving speeches to GE employees about the virtues of capitalism and the dangers of communism. Equally important for his future political career, Reagan interacted with workers and listened to their concerns.

He also married again, this time for good, to Nancy Davis, who became the love of his life and, some believe, his only real friend. Nancy’s circle of friends consisted of mostly wealthy Republicans, some who would play an important role in boosting Reagan’s political career. Reagan’s experiences and his philosophy of life were drawing him away from the Democratic Party.

He was a pragmatic Governor, willing to compromise with political opponents to get things done. It was a trait that would serve him well later in the White House. Soon he was being touted as presidential timber.

After unsuccessfully challenging Gerald Ford for the Republican presidential nomination in 1976, four years later Reagan defeated incumbent President Jimmy Carter in a landslide. (He won reelection in 1984 by an even bigger landslide). He inherited from his predecessor a terrible economy and a disastrous foreign policy.

Schweikart believes that one of the keys to Reagan’s successful presidency was his “meticulously researched and crafted transition policy planning.” This enabled him to “hit the ground running” when he came into office. His transition teams, overseen by Edwin Meese, had produced position papers on all of the major issues of domestic and foreign policy. Reagan also benefitted from the ideas put forth by the Heritage Foundation’s scholars in their publication Mandate for Leadership.

Another key to success was personnel. Reagan not only filled his cabinet with experienced and talented advisors and administrators, he also quickly changed subcabinet officials to promote bureaucratic loyalty and responsiveness. Schweikart believes that Reagan came into office as “the best prepared president in history.”

Not only had Reagan immersed himself in national and international political issues as a presidential candidate in 1976, but between 1976 and his campaign in 1980 he delivered dozens of radio commentaries on a wide variety of political and cultural issues. Of course, Reagan’s major philosophical positions had not changed since his GE days. That was another, often overlooked, strength of Reagan’s: He stuck to his principles.

In foreign policy, he benefitted from his own knowledge of communism and experience of communist tactics in the 1940s, but also from reading his favorite magazine, National Review, and its regular foreign policy columnist James Burnham. This goes unmentioned by Schweikart.

To be sure, Schweikart notes the many times during his political career when Reagan advocated the “rollback” of Soviet communism, but he does not link this to any intellectual foundation. Burnham had written three seminal books in the late 1940s and early 1950s calling for a shift in U.S. policy toward the Soviet Union from containment to “liberation.” Burnham subsequently wrote numerous columns for National Review over a 23-year time period that promoted “liberation” as a realistic policy option.

We know Reagan was familiar with Burnham. In 1983, he awarded Burnham the Presidential Medal of Freedom and during the ceremony noted that throughout his career he had borrowed Burnham’s ideas. Robert Merry among others has called Burnham Reagan’s geopolitical inspiration.

Schweikart sets forth the relevant National Security Decision papers that prove Reagan’s goal from the beginning of his presidency was to win the Cold War. These documents, of course, were classified at the time, but Reagan hinted at his strategy in several public speeches in which he said that communism was in economic and political crisis and would be left on the “ash heap” of history.

Reagan understood Soviet vulnerabilities, especially economic vulnerabilities, and his policies sought to exploit them to undermine Soviet power. He intended, Schweikart writes, “to dry up Soviet funding” by driving down the price of oils and gas which the Soviets relied on for hard currency earnings. His administration persuaded the Saudis to increase oil production, which helped depress oil prices. The Soviets knew what Regan was up to. Soviet Ambassador Dobrynin bluntly told one of Reagan’s advisers: “You have declared war on us. Economic war.”

Dobrynin was right. Reagan also put the Soviets on the geopolitical defensive by stepping up aid to the Afghan rebels, aiding the Contras in Nicaragua, liberating Grenada, “fomenting internal rebellion” within the Soviet empire (especially in Poland), and threatening to deploy strategic defenses (SDI). Schweikart notes that Reagan’s overall strategy was outlined in NSDD 75, which called for putting “economic, political, military, ideological, and moral” pressures on the Soviet empire.

Reagan’s strategy worked. Schweikart acknowledges that British Prime Minister Thatcher, Pope John Paul II, and dissidents within the Soviet empire contributed significantly to the West’s victory in the Cold War, but Reagan’s role was decisive. Soviet leader Gorbachev’s only virtue in this regard, according to Schweikart, was that he was “the first Soviet leader to appreciate the very tenuous economic position in which the USSR was enmeshed.”

Schweikart reminds us that Reagan accomplished all of this in the face of a mostly hostile U.S. and Western media and foreign policy establishment that consistently portrayed the president as an unsophisticated, dangerous warmonger, and Democratic Party leaders that opposed Reagan at almost every turn.

Not all of Reagan’s policies, of course, were successful. Schweikart, for all his admiration of Reagan, does not succumb to hagiography. He details the bickering and infighting within the administration and Reagan’s seeming inability to do anything about it. He notes Reagan’s failure to cut government spending and reduce the deficit. He criticizes Reagan for encouraging illegal immigration. He explores the political and legal mess of Iran-Contra. And he calls Reagan’s decision to deploy U.S. Marines to Lebanon in 1983 a “fatal misjudgment” that cost the lives of 241 soldiers.

But no policy failures can dim the economic success at home and the foreign policy triumph in the Cold War. The latter, especially, is Reagan’s greatest legacy and has earned the praise of liberal historians such as John Lewis Gaddis and John Patrick Diggins.

Perhaps Margaret Thatcher best captured Reagan’s greatness. At Reagan’s funeral, she noted: “With the lever of American patriotism, he lifted up the world. And so today the world—in Prague, in Budapest, in Warsaw and Sofia, in Bucharest, in Kiev, and in Moscow itself, the world mourns the passing of the great liberator and echoes his prayer: God Bless America . . . We here still move in twilight, but we have one beacon to guide us that Ronald Reagan never had, we have his example.”