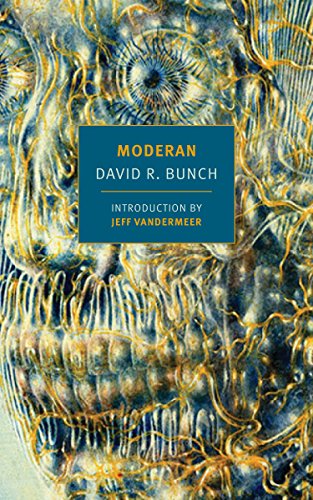 “its inventiveness and the vividness of Bunch’s language create a terrain that is both deeply weird, unnervingly familiar, and well worth a visit.”

There’s a lot that is prophetic in the pages of Moderan, the collection of linked experimental sci-fi stories by David Bunch, including but not limited to entire paragraphs written in capital letters—narrative outbursts that today seem reminiscent of a monologue by an Internet troll or of angry tweets by certain world leaders.

Of course, the stories in Bunch’s collection, long out of print and just recently re-released by New York Review of Books Classics, were written in the 1960s and ’70s, in a decidedly pre-Twitter age. While they certainly read like products of that time, they also contain a freshness, a hyper-lyricism, and a weirdness that speak to the anxieties of this moment—and not just because the strings of capital letters seem to foresee Internet rage.

As its name suggests, Moderan is a futuristic dystopia where the idea of the modern has overtaken the idea of the organic. People’s body parts and innards are slowly replaced with metal. Throats are coated in gold. Spare hearts are purchased from warehouses. The oceans are frozen and the land is covered in gray plastic sheets.

The citizens of Moderan believe they now have control over nature (a control that manifests almost entirely in environmental degradation) and over their own mortality. Mushy soft humans have been transformed into “new-metal” men. Their wives and children live in their own far-flung domains. Occasionally, the new-metal men experience Joys, which mostly involve new-metal mistresses. But the new-metal men spend most of their time hidden away in their strongholds, engaging in scheduled wars and violence with neighboring strongholds.

So synonymous are the new-metal men with their strongholds, they abandon their human names and become Stronghold 1, Stronghold 9, etcetera. Most of these stories are told from the perspective of Stronghold 10, whose grisly transformation into a new-metal man is detailed in the “The Butterflies Were Eagle-Big That Day.”

The last step of his transformation comes in the story “New Kings Are Not For Laughing,” when the narrator sees in the instructions slung about his neck that declare he has been renamed Stronghold 10. “I looked at that number and at first it meant nothing. Nothing at all,” he says. “Then I thought more, the new green juices in the fresh-made brain pans sloshing and fuming, and I thought, STRONGHOLD 10! YES! STRONGHOLD 10 FOREVER!”

Stronghold 10’s voice can feel kaleidoscopic, by turns incensed, stoic, and, often in surprising moments, elegiac and pensive. In his astute introduction to this new edition of Bunch’s work, Jeff VanderMeer notes, “Nothing quite like the Moderan stories had been written before and nothing like them has been written since. In their intensity and structure, at times they resemble prose poems.”

Bunch was also a poet, and his attention to the sonic qualities of a sentence—the wistfulness and weirdness and humor repetition and rhythm can evoke—is clear in every story. Here’s Stronghold 10 in “Battle Won,” recollecting his human times: “I had no answer in my pulpy days. I had only fears. Long fears. Short fears. Medium fears. Parts of fears. Total fears. Fragmented fears. Figments of fears. Unreasoned fears. Unreasonable fears. All the kinds of all the fears. And yet—and yet, I had a kind of course in those days.”

The catalogue of fears is funny and lyrical all at once. Yet it also points to another strength in this collection: the way Bunch is honest about his characters’ submerged terror not just after but before becoming new-metal men. Bunch doesn’t present the pre-Moderan days as some utopia. Being human is an anxious business and many of Stronghold 10’s monologues feel almost like arias devoted to this anxiety. But a new kind of anxiety emerges when a sense of mortality—of “a kind of course”—is absent.

Perhaps in part because the awareness of a kind of course is absent from many of these characters’ new-metal lives, the collection itself at times lacks the sense of a clear course, too. Since these stories appeared in a range of different journals over several decades, there are inevitable repetitions in exposition and sometimes in the outbursts Stronghold 10 is so prone to. No surprise, then, that Moderan may not be the kind of collection every reader will consume straight through—rather, it invites a kind of meandering style of reading, one that may involve flipping between stories and even between sections. However readers choose to explore Moderan, its inventiveness and the vividness of Bunch’s language create a terrain that is both deeply weird, unnervingly familiar, and well worth a visit.