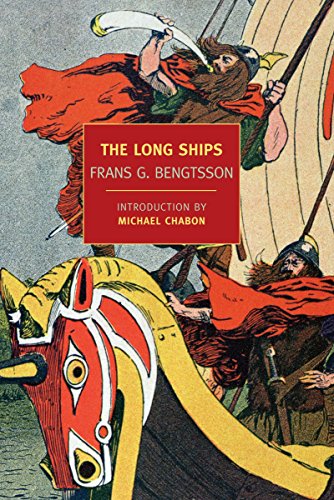 This is a new publication of a mid-twentieth century work that will introduce a whole new generation to one of the greatest adventure stories ever. The Long Ships is a marvelous novel of epic proportions. It is everything that an adventure tale should be, and at 500 pages is still far too short.

Frans Gunnar Bengtsson (1894–1954) was born and raised in Sweden. He was a prolific translator, essayist, and biographer. His two-volume biography of Charles XII won the Swedish Academy’s annual prize in 1938. Bengtsson was a firm opponent of the Nazis throughout World War II, refusing to sanction a Norwegian translation of the Red Orm tales during the German occupation of Norway.

The Long Ships comprises two distinct volumes. The first was originally published in 1941 as Red Orm on the Western Way, the second as Red Orm at Home and on the Eastern Way in 1945. They were combined and published as The Long Ships in the United States and England in 1955. This is the author’s only work of fiction.

This edition of The Long Ships includes an introduction by Michael Chabon, the Pulitzer Prize-winning author of The Amazing Adventures of Kavalier & Clay and The Yiddish Policemen’s Union. In it he roundly praises the virtues of this wonderful novel and asserts that, when read, it will “bring lasting pleasure to every single human being on the face of the earth.” He likens this novel to Homer’s The Odyssey and Alexandre Dumas’ The Three Musketeers.

The Long Ships centers upon the travels and adventures of “Red Orm” Tosteson, as he takes to the sea in search of plunder and honor in the tenth century A.C.E. Orm is a brave, strong, and resourceful man who, after leaving his home in less than ideal circumstances, becomes an admired leader and chieftain. His travels see him co-opted into the service of the Caliph of Cordoba before returning to Scandinavia and becoming intricately involved in the affairs of kings. Along the way the reader is privy to the home life of a man of some means in a time of plundering and blood feuds.

As the story unfolds, Orm meets a variety of interesting people, both friend and foe, and plies his trade in many exotic locations. Orm’s travels take him from his native Denmark as far afield as Spain, England, and the Ukraine. Despite his wit and bravery, Orm is constantly dogged by a hypochondriacal fear for his health and well-being. This often lends a comic edge to Orm’s swashbuckling adventures, and leads directly to his gaining a wife. His interactions with family and friends also help to make Orm a very realistic and likeable character. Orm is a compelling protagonist that the reader wants to succeed.

Bengtsson’s episodic and colloquial style lends an authenticity and pace to the narrative that encourages the reader to keep reading. This is a very difficult book to put down. The action comes across very much as an oral history, as if shared across communities and generations. The important events are related in detail and the linking material does not interfere with the narrative. There are very few long passages of description or introspection, and there always seems to be something happening. This is a very plot driven work that contains clear echoes of the journeys of Odysseus.

This edition of The Long Ships is beautifully presented and contains one of the greatest ever adventure stories. The introduction by Michael Chabon clearly indicates the quality of the work. Jam-packed with drama, battles, love, joy, wit, and sadness, this story is one that will stand the test of time. “Red Orm” Tosteson is a hero for the ages: brave, strong, and wise, yet fallible. As Michael Chabon writes, “When you arrive at its bittersweet, but mostly sweet, conclusion, I trust that you will turn to your shipmate, your companion in adventure, and swear by ancient oaths, as I hereby swear to you: It is really good.”