Dirk Quigby's Guide to the Afterlife: All You Need to Know to Choose the Right Heaven 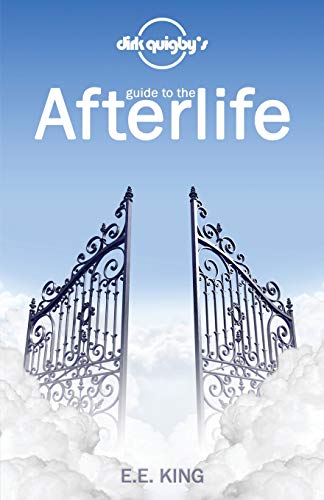 You know something’s up when the publisher has a name like “Exterminating Angel,” and the book’s dedication page says the author “intends no disrespect. . . . On the other hand, [the book] intends no respect either.” And then there’s the complete subtitle: All You Need to Know to Choose the Right Heaven Plus a Five-Star Rating System for Music, Food, Drink & Accommodations. Caution: Read only if you have a sense of humor.

Our hero, Dirk Quigby, is a man trapped in the infamous cubicle of life. His dream of becoming a travel writer is on seemingly permanent hold, as he is stuck as a copywriter in a small ad agency, with an impossible boss and the mandatory attractive, yet not too attractive, co-worker. Seeing an opportunity, Lucifer, the handsome little devil, contacts Dirk to offer him his dream job. It seems that hell has become overcrowded, and God’s favorite really wants more people to go to heaven. The problem is that it seems that there are so many heavens from which to choose.

Dirk’s assignment is to write the ultimate travel guide: a guide to the afterlife. Lots of writing, lots of travel, and no strings attached. Kind of.
Evie King does a masterful job at mixing short vignettes of Dirk’s experience with the Devil, his travels to the many heavens, his newly discovered lover, the attractive coworker Angelica (yes she is an angel in every sense of the word), and the factual descriptions of the final paradise of each faith. From the Egyptians and Greeks to the Moonies, the Nation of Islam, and Hare Krishna, there is no player that is immune to the Guide to the Afterlife. By the way, because the Egyptian and Greek religions are “dead,” their heavens are now closed. Sorry.

She also speaks to the sometimes disconcerting and violent nature of the “true believer.” Within the context of the story, they believe Dirk is out to destroy God, Christ, and spiritual belief. Though he is not, there are numerous attempts on Dirk’s life after he is a guest on the televangelist Michael Guy Alright’s talk show. Gotta love that name.

When the Guide arrived, my wife got to it first. The stories of John Smith’s Mormon Church, Mary Baker Eddy’s Church of Christian Science, and L. Ron Hubbard’s Scientology had Kathy asking, “Is this really the way some of these religions started?” Yes, my dear, it is.
The Guide honors three of my favorite writers, Douglas Adams, Fredrick Nietzsche, and Anonymous. (Did you know that his—or her—full name is Anonymous Source?) King’s humor is quiet, touching on Adams’ Hitchhiker’s Guide to the Galaxy, while Nietzsche and Anonymous are generously quoted.

There are quiet puns, many humorous pokes at religion, and King’s valiant attempt to answer the other ultimate question, “Where do I go when I die?” (The ultimate question and its answer are found in Douglas Adams’ Hitchhiker’s Guide.)

King pays special attention to American Christian beliefs for two obvious reasons. First, there are so many denominations of American Christianity (about 215 at last count) and, second, they generally do not agree on anything. Each claims to be the true Church of Christ and, with the exception of the Protestants, each has its own heaven. The Protestants invite all of their sects, but there are walls of separation to prevent . . . ?

This is the most delightful book this reviewer has read in a while. The short chapters flow easily. Lucifer is not as menacing as some would believe. He does have a heart of sorts, is quite fastidious regarding his nails, and remains God’s favorite—much to Angelica’s disdain. Angelica is a self-described “immoral immortal,” with sex and consumption at the top of her list. Dirk is Dirk.

The “Five-Star Rating System for Music, Food, Drink, & Accommodations” is most enlightening. King even touches on sex taboos during and after life. She does not leave much out.
The only problem is that Angelica seems to be there to provide the ending and the ending leaves a little to be desired, not engendering the wanting there to be more, nor the ultimate satisfaction of the thrill of the read. It was too predictable.

Nonetheless, despite this small criticism, The Guide to the Afterlife is a mixture of fact and fiction, faith and mysticism at its best.