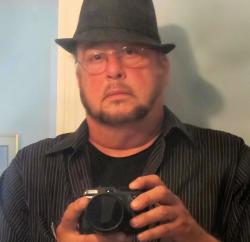 Michael Cala has been writing and photographing professionally for most of his adult life. For the past 10, he has been a writer-producer and photographer for Internet content and multimedia for ad agencies, nonprofits, and a major New York City medical center. He also co-produces traditional music concerts.

He studied American and Latin American literature while in college and speaks fluent Spanish as well as his family's native Sicilian dialect. Mr.Cala has written extensively about the history, music, and popular culture of 19th and 20th century America.

Mr. Cala has been a hospital media director and has freelanced as a health and medical writer for magazines and corporate clients since 1990, specializing in video scripting and multimedia. He has written book, music, and concert reviews for Blues Revue and SING OUT! magazines. He now writes for the new Blues Music Magazine as well as for the traditional music site No Depression.

He has also written about art photography and photographic technique for Camera 35, Photo, and Modern Photography.

Mr. Cala is researching the lives of African American composer Perry Bradford and blues/cabaret singer Mamie Smith for a book on the birth and development of the “race record” industry starting in 1920. In 2013-2014, he and his wife Anne raised funds to buy Mamie Smith a headstone—she lay buried in unmarked ground for 68 years—and to establish a cemetery maintenance fund in her name.

Mr. Cala was recently inducted into the New York Blues Hall of Fame for his work as a blues and traditional music writer.

Without scholars and writers like Albert Murray, Sam Charters, Paul Oliver, John Work, and Alan Lomax—all of whom explored the essence of American blues, jazz, and traditional music—we would be a l

In 1970, when this book was written, the United States was deeply entrenched in the Vietnam War.

The Chronicle of Jazz

A Few Honest Words: The Kentucky Roots of Popular Music

“. . . a pleasant surprise [tracing] disparate forms of American music to their roots in Kentucky.”

Way Down: Playing Bass with Elvis, Dylan, the Doors, and More—The Autobiography of Jerry Scheff

When I Left Home: My Story

“. . . When I Left Home [is] well worth reading—especially for blues fans interested in the southern rural and Chicago music scenes of the 1960s to the present.”

A Rocket in My Pocket: The Hipster’s Guide to Rockabilly Music

“There are at least 50 acts whose work is covered in detail, with scores mentioned in passing.

How the Beatles Destroyed Rock and Roll: An Alternative History of American Popular Music

“How the Beatles Destroyed Rock and Roll is a superbly thoughtful, inclusive, and intellectually challenging look at American popular music and culture from the turn of the 20th ce

“Mr. Malone paints a picture of an earnest, talented, shy, driven, and ethical man who loved nothing better than deconstructing and then playing a great fiddle or banjo tune.

George Jones, Billy Sherrill, and the Pretty-Much Totally True Story of the Making of the Greatest Country Record of All Time (American Made Music)

“Before Nashville ‘done got all slicked up,’ country-style guitar, fiddles (which became ‘violins’ in the Nashville Sound), and banjos were the predominating instruments.

The Man Who Never Died: The Life, Times, and Legacy of Joe Hill, American Labor Icon

“. . . a readable and informative history of the political, cultural, labor and religious undercurrents of life in Utah and, by extension, the U.S. . . .

“Nicely—even elegantly—written, well edited, and consisting of material not published elsewhere, this is an entertainingly rare gem of a book.

“Blues fans believing they know blues history will be surprised by the fabrications and half-truths associated with the genre, as uncovered by semiotic analysis of the many code words, meta

The Chitlin' Circuit: And the Road to Rock 'n' Roll

Through at least the first third of the 20th century, segregation prevented many talented African American performers from working in high-paying white-owned nightclubs and similar lucrative venues