The Chronicle of Jazz 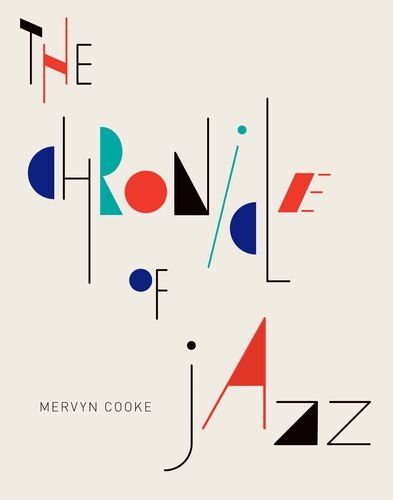 The Chronicle of Jazz is so comprehensive in its coverage of the music, personalities, events, influences, and artifacts of jazz over more than a century that one might consider it the only primer needed to discern or rediscover the intricacies of this distinctly American art form.

In some ways, such an inference would be accurate. There is enough illustrated, intelligently written, and thoughtful subject matter in this book (a reprint of a 1988 title) to send a reader off on a variety of jazz-related tangents for days on end.

To be fair, however, a book of this size can only whet the appetite for some subjects covered in greater depth in other places. Still, Chronicle is about as all-inclusive as a book can be within such a finite number of pages.

Professor Cooke has painstakingly researched the antecedents, roots, and progressions of jazz in its U.S. birthplace, as well as developments of the genre around the world, including his native Great Britain.

Within that objective, he has chronicled—a good and apt word—the American history of jazz year by year, from 1895 to 2010, investigating and illustrating for the reader the myriad personalities, trends, jazz terms, inventions, songs, milestones and anything else one would free-associate when thinking of the word jazz. He also diligently includes crosscurrents from as far away as Scandinavia and makes it enjoyable, even surprising, reading.

The Chronicle of Jazz begins with an excellent introductory essay titled, “A Century of Jazz (1895–1919)” that provides a rationale for the book as well as a scintillating overview of some of the fascinating material to which the reader can look forward.

The book’s sheer comprehensiveness ranges from an exploration of the African roots of the banjo to coverage of 2010’s joint concert featuring Wynton Marsalis and Eric Clapton playing their interpretations of American blues.

Another section covers the etymology of jazz (alt., jass), while others provide a history of Harlem stride piano, Creole jazz, the concept of “race records” and what it signified for African Americans and jazz fans, Bessie Smith’s influence on second generation singers, and hundreds of other fascinating topics.

Another nice touch is the use of pullouts, enlarged-type quotations that stand out on the page border. Everyone from F. Scott Fitzgerald to Art Tatum appears in some of these quotations.

The exciting illustrations—many in full color—are an exploration unto themselves. One could just browse the captioned musician portraits, show posters, and other ephemera and come away more than satisfied. Want to know what Scott Joplin or W. C. Handy or Thelonius Monk looked like? Look no further.

Also represented are dozens of other iconic jazz greats, including singers and even impresarios, over more than a century. You’ll find them, contextualized with cogent, user-friendly text laced throughout this excellent adventure in jazz music history. Cooke has carefully and no doubt lovingly amassed other visuals ranging from rare jazz album covers, concert photographs, advertisements, photos of musical instruments, famous jazz clubs, esteemed impresarios, and more notable locations than can be catalogued here.

Such wide-ranging coverage in both text and illustration reveals that the author has performed copious jazz research over quite a long period. The loving detail—the sheer inclusiveness—tells us that the author has had a grand time assembling what’s destined no doubt to become a basic reference for at least two audiences: jazz fans seeking to reinvigorate their knowledge or subjects they wish to revisit; and tyros wanting a one-stop shop for acquiring a broad overview of the art form.

The Chronicle of Jazz fills the bill on multiple counts and will no doubt function as a reference book in colleges and jazz clubs, as well as fans’ and musicians’ homes and libraries.

As a musicologist and critic, Cooke has not confined his musical investigations to jazz alone. His personal bibliography demonstrates an affinity to opera as well, and to classical music. His biography of British composer Benjamin Britten—a central figure of 20th-century British classical music—indicates that Cooke possesses a wide range of musical interests and the curiosity to pursue them to good end.

In terms of the organization of The Chronicle of Jazz, it appears likely from the user-friendly layout that he must have spent months or even years coming up with a logical framework into which to pack such panoply of information about jazz and its close cousin, blues.

At the same time, it is to book designer Adam Hay’s exquisite sense of order and design that so many sidebars, featurettes, photographs, and freestanding quotations live in aesthetic harmony on each of this book’s 272 pages.

Indeed, the book’s layout feels almost like a jazz improvisation, with the history of the clarinet sharing a page with a sidebar biography of jazz great Lionel Hampton. An entire chapter is devoted to the appearance of jazz in movies and television, while an appreciation of the significance of the Blue Note jazz club appears just a few pages downstream.

What strikes a sense of marvel is the number of musical personalities included in this history, as well as the range of jazz subgenres, regional differences, and styles of jazz being played internationally.

The decision to use chronology as a basic organizing tool works, for within the chronicle of years from 1895 to the near-present, we are treated to an exploration of trends that developed within those years, the performers who came to maturity, and the developments that brought jazz to the forefront as a uniquely American musical idiom.

The author has impressively cross-referenced his entries throughout to point to related or collateral subject matter. Of even greater importance in a book of this type is the complete reference section contained at the back of the book that includes an extensive discography, a glossary of jazz terms and phrases, mini-biographies of musicians, an impressive bibliography, and, finally, an equally comprehensive index.

This is a book worthy of any jazz fan’s bookshelf.