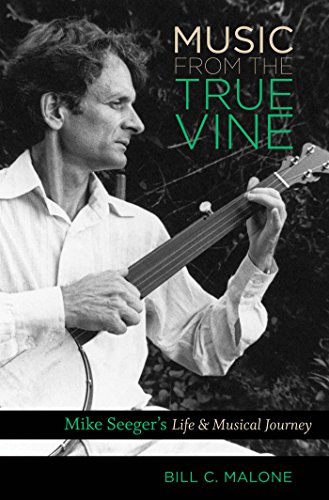 “Mr. Malone paints a picture of an earnest, talented, shy, driven, and ethical man who loved nothing better than deconstructing and then playing a great fiddle or banjo tune. That he would be held in such esteem for his contributions to American musical life was something that was a surprise to him even to the end of his life.”

In word association games, the name “Seeger” will usually elicit the first name, “Pete,” the world-famous five-string banjo player, political activist, and environmentalist. While Pete has contributed significantly to American political and cultural life, author Bill C. Malone maintains that it is Pete’s shy and self-deprecating half brother, Mike Seeger, who may go down in history as a far more important musical influence.

Beginning in the 1950s, Mike Seeger—who died in 2009 at the age of 75— field-recorded Appalachian Mountain musicians, found them venues in urban centers during the folk revivals of the 1950s and 1960s (often late in their careers), and cofounded the most influential old-style string band in 20th century American musical history: The New Lost City Ramblers.

Mike Seeger was also a prolific writer about regional folk dancing, admired musicians (including older brother Pete), and the cultural legacies of “song catchers” like ethnomusicologist Alan Lomax. He also wrote a biography of his mother, Ruth Crawford Seeger, a composer and transcriber of folk tunes who died young. (His father was Charles Seeger, an avant-garde composer, ethnomusicologist, and teacher.)

Author Bill Malone titled his book with a metaphor that suggests the common lineage of rural Southern music shared by whites and African Americans during the 19th and 20th centuries.

Malone is the perfect author to have written this biography of Mike Seeger. While the latter was born in the northeast and raised in the Washington, DC, area, he fell in love with southern music and culture at an early age. Malone, a lifelong southerner and expert on its music and culture, knew Seeger personally, though he admits that at first he didn’t care for the fellow. “In the early 1960s, when I first saw and heard Mike, I had the impression that he was aloof or, at worst, arrogant.”

In an interview, Mr. Malone stated that he also thought Seeger was an “interloper” into southern culture, not knowing that the two men had grown up loving the same music. Later, as they became friends, Mr. Malone realized that Mike’s “aloofness” was really shyness and reservation. Never seeking fame, he made it a point to develop a musical career far from the spotlight of his brother Pete.

This decision led him to cofound The New Lost City Ramblers in 1958 with photographer-musician-ethnomusicologist John Cohen, and banjo great Tom Paley, who was soon replaced by fiddler Tracy Schwartz. When Mike assembled the group during the folk boom, he had already amassed a large collection of early recorded mountain music that he listened to, and played along with, at every opportunity. He also made field recordings throughout his life and contributed many to the Library of Congress, Folkways Records (now known as Smithsonian-Folkways), Rounder, and other organizations.

Like Mike, the other members of the Ramblers were also interpreters and proselytizers of noncommercial southern American folk music. When they performed, they insisted on “authenticity”—something Seeger stressed about southern regional music throughout his life—and tended to play these recordings virtually note for note.

They ultimately became ardent promoters, preservers, and historians, taking what was until then an esoteric musical form and introducing it to a predominantly young, white, urban audience during the mid-twentieth century folk boom. Though plagued by warring personalities (the reason Paley left the band), it’s been 53 years since its founding, and the band’s approach and musical styles continue to influence academics, performers, and audiences alike.
From the beginning, says Mr. Malone, he decided to include Mike’s personal life as well as the professional. It’s here where those who loved Seeger’s approach to roots music are finally able to meet the man who kept his life extremely private. Mr. Malone addresses Mike’s early years and his amazing musical family, and follows him virtually to the end, noting the dark undertones as well as the highlights of a life honestly lived.

At the same time, Seeger was driven to uplift the music and the performers he loved, and Mr. Malone chronicles these feats fully. During his career, he recorded or produced over 40 albums of southern music. He also helped bring rural performers including Roscoe Holcomb, Dock Boggs, Wade Mainer, Libba Cotton, and Mother Maybelle Carter to public attention and successful late-life careers.

Ultimately, however, Mr. Malone paints a picture of an earnest, talented, shy, driven, and ethical man who loved nothing better than deconstructing and then playing a great fiddle or banjo tune. That he would be held in such esteem for his contributions to American musical life was something that was a surprise to him even to the end of his life.