George Jones, Billy Sherrill, and the Pretty-Much Totally True Story of the Making of the Greatest Country Record of All Time (American Made Music) 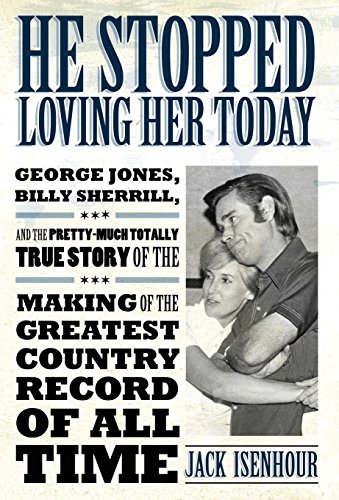 “Before Nashville ‘done got all slicked up,’ country-style guitar, fiddles (which became ‘violins’ in the Nashville Sound), and banjos were the predominating instruments. Drums were seldom heard; strings hardly ever. The new sound attracted listeners who preferred lush arrangements—often, whole string sections were added—leading to today’s very pop-sounding country music as performed by Taylor Swift or Shania Twain.

The concept of perceived authenticity is addressed by Jack Isenhour in some detail, especially when it comes to performers’ personas. As Mr. Isenhour astutely points out, whether it’s Nashville or Memphis, Detroit or the Mississippi Delta—it is all showbiz after all.”

There are, no doubt, country music fans who would disagree with the author’s assertion that “He Stopped Loving Her Today” is the best country song ever recorded. On the other hand, there are critics and fans who cite the immediate emotional and melodic impact of the chart-topping song, performed by one of country music’s greatest male vocalists, George Jones.

“Stopped” is a song about a man’s unrequited love for a woman. In the “A” part of the song, told from a friend’s perspective, there are verbal cues to how the lover holds on to her memory in so many little ways (“Kept some letters by his bed / Dated nineteen-sixty-two.”). We’re made to believe the man’s efforts are paying off, that he’s turned things around:

“I went to see him just today. Oh, but I didn’t see no tears.
All dressed up to go away. First time I’d seen him smile in years”

Then the chorus stops us cold. The man has literally kept his word, loving her until his death: “Soon they’ll carry him away. He stopped loving her today.”

Coming toward the end of country music’s long Golden Age—roughly from the 1920s through most of the 1970s and featuring artists like Hank Williams and Marty Robbins—the song was recorded in 1980 by Jones, a frequently troubled performer with multiple addictions whose career had hit its lowest point. As a single act and as half of a duo with ex-wife Tammy Wynette (“Stand by Your Man”), Jones lived pretty much near the top of the country music charts for much of his career. Even today, at age 80, Jones is still regarded as one of the finest male voices in or out of Nashville.

When Jones recorded “Stopped,” he was virtually homeless and firmly addicted to alcohol, nicotine, and cocaine. He was routinely missing studio recording sessions and major-venue performances. Drunk or high much of the time, numerous failures to honor commitments won him the label “No-Show Jones” during a period that should have marked the high point of his career.

Despite the erratic personal history, Jones is by all accounts extremely likeable and charismatic, winning many lifetime friends, including the song’s producer, Nashville production wunderkind Billy Sherrill.

The song was co-written by stellar Nashville songwriters Bobby Braddock and Curly Putman in the late 1970s. When Sherrill heard the song, which was recorded by Nashville singer Johnny Russell but never released, he felt it was perfect for Jones as a comeback song. Jones, however, had other ideas: “Who’s gonna wanna hear that morbid S.O.B.?” he said. Sherrill bet Jones $100 the song would fly—a wager that Sherrill won easily.

Sherrill liked the song, but felt it needed a kicker—so he introduced the longed-for woman into the song by adding the following verse, which he had Jones recite instead of sing:

“You know she came to see him one last time
Oh and we all wondered if she would
And it kept running through my mind
This time he’s over her for good.”

“Stopped” earned Jones major recognition after a long fallow period. It was named Single of the Year by Academy of Country Music and the Country Music Association. Both named Jones their Male Vocalist of the Year, and Jones won his first Grammy for the song. Not bad, remarked many, for a performer who seemed all washed up.

A good part of the reason why “Stopped” is so highly regarded may well be Jones’s bravura vocal performance of a sentimental song that touched many country fans. Another reason is the superb production value lent that performance by producer Sherrill, whose added verse and new arrangement raised the song’s emotional impact several notches.

Of course, the tale of the song’s instant classic status is also a story of one man’s redemption. Jones’s one-song comeback eventually helped tame his destructive habits and retrieve his reputation as one of country music’s finest performers.

Author Isenhour was so taken with the song when he first heard it, that he took time out from co-writing a book with basketball bad boy Dennis Rodman. What he has produced is a multifaceted examination of the song in broad context, focusing on its classic status, its production history, Nashville showbiz, and Jones’s mercurial career and private life.

Jones could not have had a better producer than Billy Sherrill, a piano player who learned at the feet of renowned country music producers like Owen Bradley and Chet Atkins. These producers—Bradley especially—are credited with creating and establishing the polished “Nashville Sound” in the 1970s—a musical production style that removed a lot of what was considered “country” from the more classic sounding recordings of the Golden Age.

Bradley was the first to retire the standard “country” instruments like banjo, pedal steel and honky tonk piano, instead substituting what the author calls “violins from hell,” as well as cellos and overdubbed singing choruses. This style replaced the more “authentic” sound of an older Nashville, when voice and song quality were paramount, and arrangements were straightforward and sparse.

Much of the book is written in the first person as Mr. Isenhour attends Jones’s concerts and interviews most of the song’s surviving personnel, offering lucid insight along the way into the country music business. One of his primary assertions is that emergence of the Nashville Sound was driven by record sales. The more traditional recordings were not selling to a younger, more cosmopolitan audience. Classic country music stations were having trouble surviving in urban and suburban markets. At one point, trying to elicit the rationale for the Sound, Mr. Isenhour probes Sherrill and other producers: “Because it sold,” was the universal reply.

Before Nashville “done got all slicked up,” country-style guitar, fiddles (which became “violins” in the Nashville Sound), and banjos were the predominating instruments. Drums were seldom heard; strings hardly ever. The new sound attracted listeners who preferred lush arrangements—often, whole string sections were added—leading to today’s very pop-sounding country music as performed by Taylor Swift or Shania Twain.

The concept of perceived authenticity is addressed by Jack Isenhour in some detail, especially when it comes to performers’ personas. As Mr. Isenhour astutely points out, whether it’s Nashville or Memphis, Detroit or the Mississippi Delta—it is all showbiz after all.