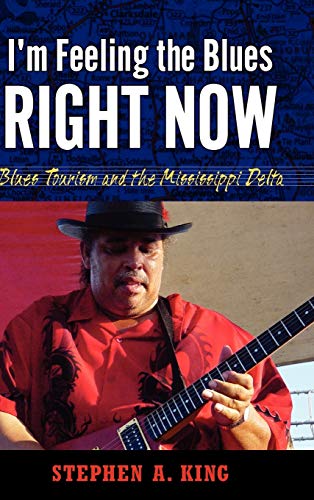 “Blues fans believing they know blues history will be surprised by the fabrications and half-truths associated with the genre, as uncovered by semiotic analysis of the many code words, metaphors, similes, and folk tales that have become part of blues tourism culture.”

Despite a violently racist history that stretches back to the first African enslavements in the 1790s, when Mississippi was still a territory, the state has reinvented itself brilliantly as a major tourist attraction for lovers of American blues music, according to Stephen A. King in I’m Feeling the Blues Right Now: Blues Tourism and the Mississippi Delta.

This revisionist sleight-of-hand, he asserts, germinated in the 1960s and was set into high gear by the 1990s as the local heritage tourism industry became more sophisticated. Its architects were—and remain—a mostly white, local consortium of private, public, and municipal interests determined to “rebrand” Mississippi into a virtual blues Disneyland and thereby reap tourism’s economic benefits.

After all, heritage tourism has succeeded in creating enviable economic role models elsewhere: Historic Williamsburg (VA), Providence (RI), Salem (MA), The San Antonio (TX) River Walk, and Fisherman’s Wharf (CA) all address heritage, and all fall among the Top 25 most visited American tourist destinations. No doubt, Mississippi pines for a slot on that list.

The problem with repackaging Mississippi history to attract tourist dollars, says Professor King, Professor of Communications at Mississippi’s Delta State University, is that marketing the state as a desirable destination has required development of a collective, biracial historical amnesia.

Denying the state’s centuries-old inhumanity toward African Americans, as many (but not all) of the state’s tourism campaigns do, effectively erases Mississippi’s disturbing history, asserts the author. (It should be remembered that the state’s terrible civil rights record has followed it well into the twentieth century.)

Professor King notes that today’s blues tourism industry has its roots in the 1960s:

“Arguably, the 1960s blues revival portended the emergence of blues tourism, for the preservationist impulse embedded in the revival parallels cultural or heritage tourism, an industry steeped in the ‘preservation ethic’ . . . In turn, the [blues revival] created the conditions for whites in Mississippi to play a dominant role in blues tourism by the 1980s and 1990s, the music’s primary advocates were white (sans African American blues musicians), and the blues had achieved newfound respect and social acceptance.”

In the process, asserts the author, blues marketing has created strange bedfellows in the drive to create a new and more musical perception of the state.

These include Mississippi’s African American musicians and their families, music promoters, chambers of commerce, local and regional tourism boards, town councils, and members of various blues foundations and academic centers. The scope of marketing has been designed to convince locals to take economical, alternative “staycations,” while also seeking other states’ tourism dollars and those from visitors from as far away as Scandinavia and Japan.

Blues tourism has become an economic initiative at the highest state levels, says the author. The Mississippi Blues Trail Foundation and Commission, for example, describes their interrelated missions (and implied value) on their shared official website:

“The Mississippi Blues Foundation is a support organization made up of a diverse group of business and community leaders. The role of this group is to spearhead efforts to identify and secure sources of financial and programmatic support for the work of the Mississippi Blues Commission . . . [which is] a body of eighteen appointed Commissioners representing major organizations and geographic/political regions supporting Blues initiatives throughout the state. It is chaired by an appointee of the Governor.”

The website is instructive in defining the breadth of offerings for Mississippi blues tourists, with well over 110 “blues trail markers” that represent, in the Blues Trail Commission’s words, “sites [that] run the gamut from city streets to cotton fields, train depots to cemeteries, and clubs to churches. We have a lot to share, and it's just down the Mississippi Blues Trail.”

The markers and the many artifacts and ephemera available for viewing are an ambitious attempt to document the origins of Mississippi blues from 1903 (the year that “St. Louis Blues” composer W. C. Handy allegedly first heard the sound of a blues slide guitar played in public) to the present day.

These markers alert visitors to locations of blues performers’ births and deaths, the plantations where they sharecropped (for as little as $2.50 for a 12-hour day), the pitiful shacks in which they were housed, and locations with mythologies that have outlived the performers: the famed Route 66, for example, which bisects the Delta, or the infamous “Crossroads” on Highway 8 near the Dockery Plantation where Robert Johnson allegedly traded his soul to Satan for musical prowess, and similar rural legends and hokum that add mystique to the traveler’s itinerary.

Citing marketing copy used in brochures and media advertising developed by Mississippi blues associations, municipalities, private and public museums, universities and other institutions, Professor King turns a jaundiced eye on the dubiously revisionist “history” that runs through the many publications and Web sites. Too often, the copy supplants the truth, or at least suppresses the unpleasant parts. In order to succeed as well as it has, Mississippi Blues heritage tourism requires making blues fans forget the many bodies—black and white—buried under its lustrous new image.

In the various interviews conducted by the author with tourism officials and businesses, rare are the mea culpas one would expect when discussing the topics of Mississippi, race relations, and the blues. From a marketing perspective, Professor King suggests, the reimagination of Mississippi requires forgetting all that lynching and just remember that Mississippi is, after all, “the land where the blues began.” This de facto state slogan is also the title of a book written in 1993 by Texas-born ethnomusicologist and blues music collector Alan Lomax—right around the time blues marketing fervor was hitting its stride.

Professor King does an excellent job in deconstructing the blues message, which deflects inquiry into just how poorly the now-venerated “classic”
[and mostly deceased] blues musicians were treated in their lifetimes, being poorly paid and kept in perpetual debt by the sharecropper system, denied health care, and frequently buried in unmarked graves.

Blues fans believing they know blues history will be surprised by the fabrications and half-truths associated with the genre, as uncovered by semiotic analysis of the many code words, metaphors, similes, and folk tales that have become part of blues tourism culture.

Professor King wisely dissects contemporary blues tourism‘s pervasively “happy” and clichéd view of southern life vis-à-vis the blues—blacks knew their places, “they” loved to sing and play, everybody was happy with segregation, plantation work wasn’t that hard, etc. He connects this sensibility to one that’s far older and perhaps even more pervasive: the longstanding need for many southerners to romanticize—and even long for a return to—the hopelessly romantic view of the antebellum South (Gone with the Wind for the Internet Age.)

In addition to a thorough discussion of the state’s blues tourism industry, Stephen A. King also offers capsule histories of Mississippi blues in historic context (natural disasters, world war, economic slide and recovery, political corruption), as well as an overview of the contemporary blues scene in its entirety. This includes interviews with performers and promoters, marketing groups, local and state economic interests, and the organizers of the many blues festivals that have become an industry unto themselves. There’s also discussion and analysis of contemporary race relations, as well as the internecine fights over province and profit, truth and artifice.

While most readers will enjoy Professor King‘s contextualizing of heritage marketing and his deconstruction of the many local and regional campaigns for tourist dollars, some will find that portions of the book are somewhat redundant and therefore might have been omitted. The chapter organization and rigorous annotation also suggest that this could have been the author’s thesis or dissertation.

These minor observations aside, the topic is engrossing, the writing is accessible, and the author has been fair in presenting his case wherein the truth, ugly or not, has been honestly addressed.