The Man Who Never Died: The Life, Times, and Legacy of Joe Hill, American Labor Icon 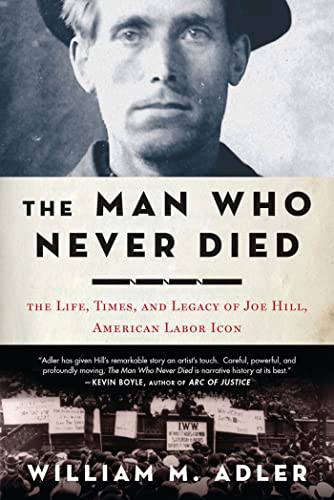 “. . . a readable and informative history of the political, cultural, labor and religious undercurrents of life in Utah and, by extension, the U.S. . . . fascinating, and shows how even big government can effect the arrest, conviction, and execution of one of the most politically active and loved activist-troubadours of the 20th century.”

It is fitting that this first-ever detailed biography and thoroughly investigative reporting into a mysteriously unsolved crime leading to the execution of one of America’s most revered labor organizers and protest songwriter/singers, Joe Hill, has been released to coincide with Labor Day.

The political martyrdom of Swedish immigrant, musician, and labor organizer Joe Hill (real name: Joel Hägglund) in 1915 may not be as familiar to most Americans as those of, say, Abraham Lincoln, John Brown, Medgar Evers, Malcolm X, or the Freedom Riders.

However, many have come to learn about Hill after listening to the famous song penned in 1936 by Alfred Hayes and Earl Robinson. The song, “I Dreamed I Saw Joe Hill Last Night,” has been sung almost continuously for more than 70 years at labor rallies, political protests, antiwar rallies, and everyplace where injustice is protested.

The melancholy yet stirring song has been sung by Bob Dylan, Phil Ochs, Pete Seeger, Judy Collins, labor union choruses, church groups, and others inspired by Hill’s empathic sense of justice for the poor and disenfranchised. The song’s most famous lines most likely appear in the first stanza:

Nevertheless, Hill’s conviction under questionable circumstances for a murder he did not commit, and his speedy death by firing squad in Utah in 1915, created a hero whose memory remains embedded in the memories of labor unionists, political songwriters and activists—past and present. They likely realize that Hill’s unfair death (self-engineered in part possibly out of selflessness) spurred the powerful World War I era IWW (International Workers of the World) into high gear.

The IWW wasn’t merely a union in the way that the American Federation of Labor (AFL) was—it was “almost a religion,” according to some, and it relied on its culture of songwriting and protest singing to ramp up worker anger to fight the unfair wage system during a period when capitalists ruled and laborers had few if any rights. One of the IWW’s best songwriters was Joe Hill.

At one point, the IWW was so powerful in national politics that their candidate, the socialist Eugene V. Debs, outpolled William H. Taft in the popular vote in seven states. Unlike the American Federation of Labor, with its willingness to negotiate with the bosses and subdivide workers by craft, the IWW has been called a virtual religion.

Central to the IWW was the precept “all for one and one for all,” which was emphasized in message songwriting and singing (with Hill writing many of the most effective IWW rallying songs)—and organizing all workers under one noble banner.

If tool and die workers wanted to strike for better wages or working conditions, then the rest of the IWW membership (ironworkers, carpenters, etc.) would strike in brotherly solidarity to win the anti-capitalist battle in what the IWW called “industrial unionism.”

The author claims that, had Hill lived and been denied violent political martyrdom, very few today would know or celebrate the work of this heroic man of the people, which is possibly true. After all, martyrdom often extends the memory of martyrs and their causes. Just look to the history of religious martyrdom in the Middle Ages (Joan of Arc?) for proof.

“A grocery store owner named John Morrison, a man who’d been a police officer and soldier and was considered a tough but community-minded resident, and his son, were gunned down late one evening in Morrison’s general store as they were closing up. Police searched the neighborhood after the murders, questioning everyone including a man with at least 16 pseudonyms named Frank Z. Wilson, upon whom they found a bloody handkerchief.”

It would later be determined that “Frank Z. Wilson” was on a crime spree of robbery and assault (and possibly murder) in neighboring towns. For some reason, however, the police released Wilson with just a warning. (Later, after Joe’s death, it would be determined that Morrison and Wilson had done business together some years before. Was there bad blood between them in 1915? We will never know.)

After releasing Wilson into the night, the police stopped Joe Hill, who had been returning from a tryst with a young woman. They interviewed him and asked him to empty his pockets. Inside, was Joe’s red union ID card, identifying him as a member of the hated IWW. His reluctant alibi, an unexplained injury on his forearm, and that “evil” card were all the cops needed to drag him into custody.

Joe was soon arraigned. He refused to give an alibi for the night in question, which made him look all the more guilty to the IWW hating magistrate and police. IWW organizers and friends were ultimately able to get thousands of advocates on Hill’s side, included President Woodrow Wilson and Helen Keller—all of whom were willing to intercede on Hill’s behalf and spare him the death penalty if only he would tell the verifiable truth about his whereabouts that night. All he had to do was confirm his whereabouts and explain what looked like a bullet wound on his forearm. Joe refused to “sing,” was convicted at trial, and was sent to death row.

He did convey to some IWW comrades what are likely the actual events of that night. According to confidants including Big Bill Heywood, he had been vying with local swain Otto Applequist for the affections of pretty young Hilda Erickson.

The men fought over Erickson, and Hill was injured by Applequist, most likely with a revolver. But Hill refused to offer any exculpatory evidence for fear of embarrassing Miss Erickson. Besides, Hill was convinced that, with no witnesses to the crime, no murder weapon, and no credible motive for killing Morrison or his son (whom police believed was killed by an escaped Hill co-conspirator), that he would ultimately be exonerated. So he did not prepare for trial, which came to be characterized by American judicial historian Philip Foner as “one of the worst [judicial] travesties in American history.”

Of absolutely no help to himself, Hill decided to mount his own defense during his trial. He figured all along that the trial would end in acquittal. When it didn’t, he petitioned for a new trial citing lack of evidence; the request was summarily denied.

Had he accepted the offers of attorneys willing to represent him, and had he told the truth about the night of the Morrisons’ shootings, Foner’s “judicial tragedy” may likely have been averted and perhaps the likely guilty Frank Z. Wilson arrested for the crime her likely did commit.

While on death row, Hill was heard to say to IWW leader Big Bill Heywood, “Don’t waste any time mourning, organize!” Contemplating this adjuration 96 years after the fact, author Adler speculates that Hill had come to the realization, while writing songs, poems and letters in his jail cell, that in death he would become much more of an inspiration—a martyr to the IWW and the international labor movement—than he could ever be in life.

Hill refused to the day he faced the Utah firing squad to provide the alibi to officials that would at least spare his life—and possibly free him at some point. What remains a mystery is why Hilda Erickson, who became one of Hill’s pallbearers, or even Applequist, did not come forward with exculpatory evidence. If they had, it is likely Hill would not have been executed. In any event, Hill faced his death stoically, while those who loved and admired him could never understand why he literally chose death over life when he could have saved himself.

While the prose is dense in parts, and we are inundated with detail, this book is nevertheless a readable and informative history of the political, cultural, labor and religious undercurrents of life in Utah and, by extension, the U.S. The portrait of Utah as a fast growing early 20th century capitalist state with iron and coal mines and with a growing middle class and government that detested the IWW is fascinating, and shows how even big government can effect the arrest, conviction, and execution of one of the most politically active and loved activist-troubadours of the 20th century.