When I Left Home: My Story 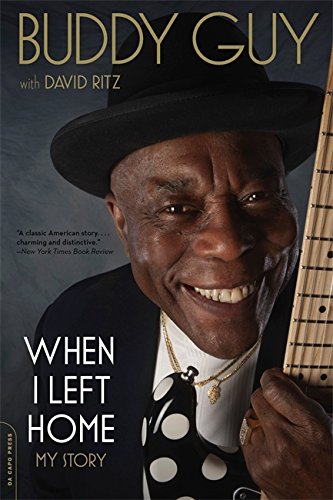 “. . . When I Left Home [is] well worth reading—especially for blues fans interested in the southern rural and Chicago music scenes of the 1960s to the present.”

This is a book by a blues music icon, ghosted by a writer with an acute sense of language such that it reads almost like an artful transcript. Nowhere does it seem ghost written, because coauthor David Ritz has obviously studied Buddy Guy’s speech, bringing to When I Left Home a linguistic verisimilitude that captures perfectly mid-century Black southern regional dialect.

This skillful facility enhances the “you are there” feeling one gleans from this entertaining first-person narrative by an iconic musician. The many amusing anecdotes he relates about famed blues musicians like Muddy Waters, Howlin’ Wolf, Jimmy Reed, Willie Dixon, and others is sure to engage the interest of blues fans.

And then there’s the life story, full of sometimes riveting anecdotes and “dish” about some other famous bluesmen including Howlin’ Wolf (Chester Burnett) and Sonny Boy Williamson II.

Buddy Guy got his start in Chicago in 1957 after migrating from Louisiana, leaving behind a loving nuclear family and a difficult sharecropper’s life. For a long while, making a living is not easy in Chicago, and although Guy begins playing small gigs and working as a studio guitarist on a number of Chess Records recording sessions, including those for Muddy Waters and BB King, fame is slow to come. So slow, in fact, that he is forced to drive a tow truck by day to support what is, at this point, a highly equivocal career as a musician.

Still, he perseveres with all the energy that only a very young man can devote to such a taxing lifestyle (Buddy Guy was 21 when he arrived in the Windy City). It’s clear, however, that, in addition to talent, Guy possesses the kind of charisma that helped him network his way to success.

One anecdote has a club owner telling Guy after a set that “the Mud wants to see you.” Guy, pretty much straight off the farm at this point, thinks the owner is telling him somebody wants to mug him. (“The Mud” is Muddy Waters.)

Enlightened by the club owner, Guy joins Muddy Waters in the latter’s car. Muddy offers the perennially hungry musician a meal of Italian salami, assuring Guy that he will have work in the Windy City.

The fact that his talent was also recognized by the famed Chess Records label—though not recompensed properly by the notoriously parsimonious Chess brothers, Leonard and Phil—facilitates the building of a reputation as a studio musician that ultimately leads to success as a touring blues musician.

What is most striking about this autobiography is how much it conveys Buddy Guy’s deep humility and his humanism. Nowhere do we get a sense of narcissism, and the many times he grants goodwill toward club owners, record company executives, and other musicians who have jilted him out of money or recording credit is impressive.

Guy projects a persistent willingness to see the good in others, making readers feel that we’re hanging out with a real gentleman who also happens to be a musical genius.

Even when it comes time where groupies are hanging around his door after he achieves name recognition, Guy modestly tells us that, thanks to his nurturing family—especially his mother—what he really wanted even as a young unknown, was a wife, someone to settle down with, and not a bunch of one-night stands he could brag about to other musicians.

For those of us familiar with Guy’s strutting and signifying and wild onstage persona, derived in part from Buddy’s early admiration for the flamboyant blues legend Guitar Slim, it is a delight to know that the real guy is someone who rates respect for a life well and generously lived.

Buddy Guy’s interest in music began with a primitive, one-string instrument when he was a child in rural Louisiana, living with his sharecropping family that included a brother and sister in addition to his perennially supportive parents.

Guy started playing the diddley-bow, a common “instrument” in poor rural southern communities, where a single wire was stretched tightly between two large nails or screws, either on a board or even against a wooden wall. He writes that he reveled in making new sounds.

With the wire stretched taut, the diddley was plucked while the player varied the pitch with a slide made from a glass bottleneck or an old knife or spoon. Many early bluesmen often played diddley-bows before they could afford to buy or trade for a guitar.

When he turned 12, Guy was delighted to receive a real guitar from his father, who had paid a neighbor $4.25 for a six-string strung with but two strings. It would remain that way for a while, since Guy couldn’t afford the other four strings. But he didn’t care, as the second string increased his picking options by 100 percent with the extra string added, plus increased volume from the hollow guitar body.

By his genial account, family life was good in Louisiana, but by the time he turned 20, he was a talented player with an itch to play music professionally.

John Lee Hooker’s “Boogey Chillun” ran through his head constantly, pushing him to fashion a life in the blues. The only place to go, as visiting bluesmen like Guitar Slim and Lightnin’ Slim informed him, was the south side of Chicago, where bluesmen like Muddy Waters and Howlin’ Wolf and Jimmy Reed and other legends lived and played in famed blues clubs.

His 21st birthday found him trainbound for Chicago.

Once in Chicago the naïve sharecropper’s son finds the world opens up for him, he who has never experienced the typical hustle of life in an urban enclave. By the 1980s he will have become a legend himself, playing some of the best electric blues ever heard, with a stage show that routinely draws audiences to their feet. At 76, Buddy Guy is still going strong.

In other sections, the author paints a loving yet complex picture of former partner Junior Wells, a troubled blues harmonica genius with a bad alcohol habit.

By the end of the book, the author has taken us into the near present, sharing tales of success on the European and rock club circuits, as well as his positive impressions of the young white blues-rock performers like Eric Clapton, Jeff Beck, and the Rolling Stones.

These young British musicians took the American blues idiom abroad to England, and then successfully re-presented it to U.S. audiences, opening the way for musicians like Guy and facilitating numerous revived careers of older bluesmen.

One criticism: There is very little coverage of the upswing of Guy’s career after 1991 when he recorded what some consider one of the best blues albums of all time—Damn Right I’ve Got the Blues.

Nonetheless, the anecdotes; portraits of performers such as Wells, Waters, Big Mama Thornton, Little Walter Horton, and Willie Dixon; and the honesty with which he conveys his life, make When I Left Home well worth reading—especially for blues fans interested in the southern rural and Chicago music scenes of the 1960s to the present.