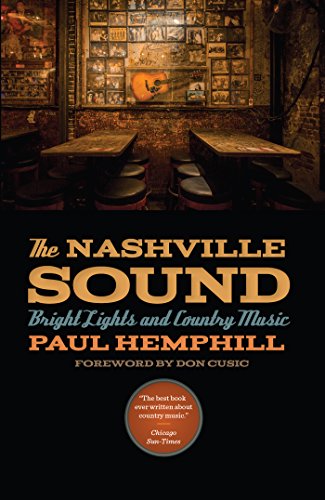 In 1970, when this book was written, the United States was deeply entrenched in the Vietnam War. The culture had bifurcated into “straight and pro-war,” versus a new liberal and freethinking generation that was anti-war, anti-establishment, and had its own music that didn’t include rural America. “Country music” still bore the redneck mantle, on the one hand, and the Appalachian fiddle-n-banjo cultural imprimatur on the other.

While country music had been recorded commercially since 1922 with artists like Pop Stoneman, Eck Roberts, and Uncle Dave Macon, southern performers typically had to travel to New York City to record.

The famous Bristol, Tennessee Recording Sessions, led by producer and talent scout Ralph Peer for Victor Records, caused a sensation when they took place in July 1927. It was the first time the Carter Family and Jimmie Rodgers, the “Singing Brakeman,” recorded some of their best, iconic work during a two-day session. Bristol is considered the Big Bang of country music.

Hemphill’s era began where classic country music was beginning to change —when fiddles and banjos were becoming scarce in country recordings, and the classic 1950s and 1960s honky tonk tunes began to metamorphose into a mainstream genre that would leave us, by 1990, with country-as-pop.

The change began with the string-laden Nashville Sound. “Fiddles” were now called violins and played not solo staccato like at a barn dance, but in elaborate, over-arranged ensemble playing. There were lots of strings used in the Nashville Sound. Going or gone was the wailing pedal steel guitar and the “high lonesome” vocal sound so characteristic of earlier country music.

On the West Coast, the refined “Bakersfield Sound” of Buck Owens was also moving records and creating stars, while the pop-influenced Nashville work of producer Owen Bradley and others would lead ultimately to today’s “hat acts,” typified initially by Garth Brooks and later promulgated by anyone whose head could fit into a ten-gallon Stetson.

Reviews of Hemphill’s Nashville Sound were uniformly positive upon publication—not only in the music press, but also in august publications like the New York Times. And even now—although many hundreds more books on country and roots music have been published, The Nashville Sound remains not at all dated—rather, it’s a rare snapshot in time.

After an enticing overview of the book’s contents by Don Cusic, the book opens en medias res, at Tootsie’s Orchid Lounge, a popular hangout for country music artists and hangers-on. Anybody who came to Nashville went to Tootsie’s to ogle the stars, make contacts, and listen to some bona fide country music in this gutbucket country bar located right across the street from the Grand Old Opry.

An excellent chapter analyzes the Nashville sound, a modern and homogenized type of country music created by country star Chet Atkins that replaced fiddles and banjos with strings, added vocal choruses and multitracking, and gave the music a slick pop sound closer to Top 40 Radio than it had ever come before.

Hemphill documents the furor that Atkins—record producer and head of RCA records—caused with his new, easy-listening sound, with many old time country performers and fans lamenting the loss of county’s distinctive and historic country sound. Atkins’s rejoinder:  If country music is going to make it into the 1970s and beyond, it has to change with the times.

Hemphill was an admirer of Hank Williams, and the late singer’s spirit (he died in a 1953 car accident) infuses many sections of the book. At one point, Hemphill writes:

“When Hank Williams died, his kind of music was a symbol of the country music that was most popular at the time. The music was typified by a nasal singer and a whining [pedal] steel guitar and honky tonk lyrics, and the stars were people like Webb Pierce, Ernest Tubb and Roy Acuff and Faron Young. These stars…were making big money cutting pure country records and playing one-nighters in the boondocks for what was primarily a middle-aged, middle class Southern audience.”

Using Hank as a touchstone, Hemphill introduces the story of the commercial spread of gospel-inflected recorded country music by the much revered Carter Family (1927-1956), and through them the stories of Mother Maybelle Carter’s son-in-law, Johnny Cash, as well as other contemporary acts including Glen Campbell, Eddie Arnold, and Roger Miller.

Hemphill discusses the revisionist “Bakersfield Sound” created by California country star Buck Owens of Hee Haw fame and one of the wealthiest music producers of his time. Owens, in his autobiography “Buck ’Em,” states how much he hated the watered-down Nashville sound, Nashville producers, and everything associated with the town, and how he was proud to have remained a highly successful Nashville outsider until his death in 2006.

Hemphill even covers the so-called Singing Cowboys in a chapter on Tex Ritter (father of the late actor John Ritter), including Roy Rogers, Gene Autry, and the Sons of the Pioneers, and underscores how important these movie and stage show stars were to getting the country sound to a national audience.

A telling chapter on African American country singer and harmonica player DeFord Bailey—a frail man who was briefly a star at the Grand Old Opry—takes place in an interview at Bailey’s shoeshine stand. Here is Hemphill’s opportunity to comment obliquely on race and class and country music, and he does it well.

This book ends with a fitting coda: a night at the contemporary Opry circa 1970. Though you could still hear Grandpa Jones performing there, and classic country stars from the 1950s and 1960s, a new brand of “modern” country performers like Jeanne C. Harper and Glenn Campbell shared the stage with these revered veterans. This snapshot is a perfect mix of the old and the new, and it only just augurs the fact that country music would ultimately become just so much show biz fizz.

Think of a country star or just about anything relating to country music until 1970, and there’s a very good chance that this very comprehensive book includes what you’re looking for. An excellent index makes it easy to skim the abundant contents.

Michael Cala has written extensively on folk, blues, and American roots music, including numerous reviews of books, recordings, and concerts, as well as blues and jazz artist profiles. In 2013–2014, he and his wife Anne raised funds to buy 1920s blues pioneer Mamie Smith a headstone—she lay buried in unmarked ground for 68 years —and to establish a cemetery maintenance fund in her name. Mr. Cala also writes about photography and health topics. He is a regular contributor to Blues Music magazine, writes for ad agencies and other commercial clients, and contributes articles about American music and history to digital and print venues including No Depression. He was recently inducted into the New York Blues Hall of Fame.