A Rocket in My Pocket: The Hipster’s Guide to Rockabilly Music 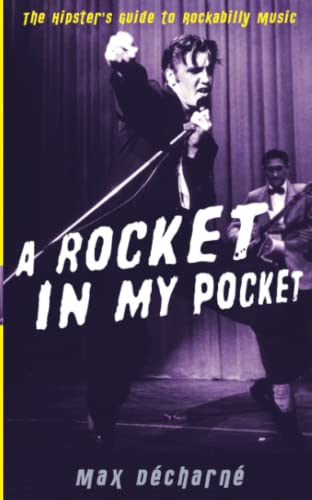 “There are at least 50 acts whose work is covered in detail, with scores mentioned in passing. Their impact on popular music was significant at the time, and the author has made an excellent case that they deserve rediscovery today. Of course, it took a British fan of American music to create this superb ode to a historic and highly entertaining (and very danceable) genre of American popular music.”

Historically, the British have been highly appreciative of American popular music. At one point, they reintroduced us to a long-neglected homegrown product—the blues—that few white Americans were familiar with until the blues and folk booms of the 1950s and 1960s took the country by storm.

For example, if it weren’t for 1960s British blues bands like the Yardbirds and John Mayall’s Bluesbreakers, there would likely not have been an American blues-n-roots renaissance following the “British Invasion,” nor would the blues, reincarnated and transmuted into many diverse forms, be as popular as it is today.

Max Décharné is also British and has done for rockabilly—the briefly flowering synthesis of American musical styles initially popularized by Elvis Presley—what earlier British musicians and critics have done for the blues.

The author has been collecting rare rockabilly records on labels both famous and obscure since the 1970s. He also plays it; and in A Rocket in My Pocket, he distills 40 years of an intimate knowledge of American country, Western swing, boogie-woogie, rock and roll, and rockabilly into a highly readable and informative package, marred only occasionally by use of unreferenced British acronyms. British spellings (“favourite,” “color,” “towards,” etc.,) of course, are standard.

Max Décharné begins by detailing the genesis of Elvis’s rockabilly sound as an amalgam of Western Swing, rhythm and blues, bluegrass, and country blues music. The author then makes a compelling case for the development of rockabilly during the 1950s from these earlier musical forms.

Like its blues counterpart, rockabilly’s history is rooted in Memphis, Tennessee. In a little studio known as the Memphis Recording Service (later, Sun Records), some of the first and best country and rockabilly (and blues) was recorded by company owner and producer Sam Phillips.

Of note, the author covers quite a few women of rockabilly in addition to Jackson, women who are barely mentioned in most pop music histories, like the underrated Barbara Pittman, or Janis Martin, Mimi Roman, and Alis Lesley—all of whom were billed at one time or another as “the female Elvis.”

Unfortunately, says the author, rockabilly was associated so strongly with male performers that the women of rockabilly—except maybe for Wanda Jackson—never achieved national prominence or chart positions.

Of all the Sun Records performers, Elvis’s influence on rockabilly was arguably the most significant—and infectious. The author notes that every other record label began scouting for its own version of Elvis, and teenagers nationally took to the craze for what many called “hillbilly” music, calling Elvis the “Hep Cat.”

Until he was “sanitized” by his manager, “Colonel” Tom Parker, and aimed at an adult audience by 1960, Elvis was the textbook definition of “hep” for a generation of teenagers tired of listening to their parents’ music.

As a result, bluegrass, rock and roll and country performers took up the craze and were recorded by the many small labels created to accommodate the record buying audience. Perhaps in emulation or deference to Texas Swing maestro Bob Wills, who recorded a number of swing and pre-rockabilly songs with “boogie” in their titles, many rockabilly tunes continued this tradition.

Scores of bands with “hillbilly” in their titles would perform songs invariably titled a “boogie”—“Fast Train Boogie,” “Mississippi Boogie,” “Girl Crazy Boogie,” etc. One Sun Records artist who attained a measure of rock and roll and rockabilly popularity was Billy Lee Riley, whose recording, “Rocket in My Pocket,” was taken by the author for this book’s title. (Riley also recorded a novelty tune, “Flying Saucers Rock and Roll,” that became the title for a book on eccentrics in rock and roll. That book is reviewed in these pages.)

The author presents a history that is at once sweeping and yet highly detailed. He cites records and artists that only a true rockabilly fanatic would know.

Likewise, the personalities he presents—everyone from Sun’s Sam Phillips to Meteor Records founder Leonard Bihari and countless rockabilly artists—through newspaper and radio interviews, magazines, ands reminiscences of the artists, takes us from hotbeds of hillbilly music from Tennessee to Texas.

There are a number of entertaining anecdotes throughout the book, and Mr. Décharné tells a good tale. For example: When Sam Phillips sold Elvis’s contract to RCA Records just two years after signing him, everyone thought he had lost his mind; however, Phillips was a shrewd businessman who knew he could use the proceeds of the contract sale to promote his struggling label and its rockabilly artists including Perkins, Lewis, and Cash.

Thanks to the success of these artists, as well as perhaps a dozen other successful acts (some of whom performed blues and r&b before Phillips settled on recording mostly white country singers), Phillips created Sun Records International—an empire of music and business interests that would outlast him.

This book’s subtitle tells us it’s aimed at hipsters, but of course it’s written by a member of the choir for other choir members, as the author lists scores of artists and bands, particulars of recording sessions, label creations and failures (like the short-lived Meteor Records), and much more.

The “more” includes emphasis on the importance of films aimed at teens that featured rock and roll and rockabilly, in addition to R&B. “Rock Around the Clock,” featuring Bill Haley and the Comets, and “The Girl Can’t Help It,” featuring Gene Vincent and Eddie Cochran (and Little Richard!) were the two most influential films, although drive-in quickies like “Hot Rod Gang” and “Rockabilly Baby” also fueled the musical craze. Acts not normally associated with rockabilly, like the Everly Brothers and Roy Orbison, are also covered in detail.

Mr. Décharné also devotes much ink to the many regional and national television and radio programs that fueled the rock and roll and rockabilly fires, like Dick Clark’s American Bandstand, and Ted Steel. He also documents the appearance of Elvis and other rockabilly performers on “adult” variety entertainment programs like “The Ed Sullivan Show,” “The Milton Berle Show,” “The Steve Allen Show,” and variety programs hosted by the Dorsey Brothers and others from the Big Band era.

On radio, Memphis’s Dewey Phillips, known as “Daddy-O Dewey,” promoted rockabilly acts just as hard as he promoted the black R&B and blues acts that were so much a part of the Memphis music scene. Of note, Dewey Phillips (no relation to Sam) was a racial integrationist at a time when few white southern DJs would have had the nerve to advance “race music” to the degree that Phillips did on his program.

For those who only know the neo-rockabilly of acts like the Stray Cats or Sha-Na-Na, this is one of the most complete and entertaining histories (and discographies) of rockabilly in print. There are at least 50 acts whose work is covered in detail, with scores mentioned in passing. Their impact on popular music was significant at the time, and the author has made an excellent case that they deserve rediscovery today.

Of course, it took a British fan of American music to create this superb ode to a historic and highly entertaining (and very danceable) genre of American popular music.