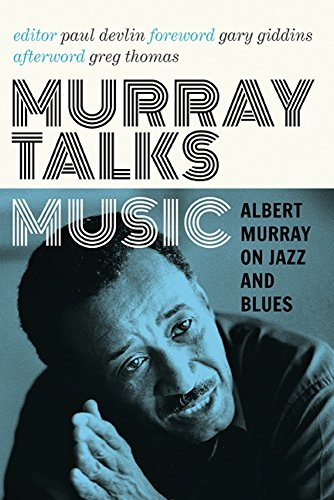 Without scholars and writers like Albert Murray, Sam Charters, Paul Oliver, John Work, and Alan Lomax—all of whom explored the essence of American blues, jazz, and traditional music—we would be a lot poorer in our knowledge and access to these vital cultural forms. Worse, there are artists and performers of whom we’d never have heard if it weren’t for the investigations of these intellectual giants, especially Albert Murray.

Of Murray—who alternated in print as novelist, music critic, and social commentator—renowned scholar Henry Louis Gates Jr., assessing Murray’s intellectual vitality and multiple accomplishments wrote, in a New Yorker profile titled, "King of Cats" (April 8, 1996), "This is Albert Murray's century. We just live in it.” Likewise, in a profile of Murray published in Newsweek, writer Malcolm Jones Jr. called the author “one of the “most influential cultural figures” of the 20th century.

Although often considered by the white press as the premier spokesperson for the black community, Murray considered all of American culture his purview in his writing, saying that all Americans, black and white, share a common culture that is most fervently expressed in blues and jazz music. In the way that poet and blues critic Amiri Baraka characterized African Americans as “blues people,” Murray posited that the culture as a whole partakes of a “blues idiom” that has given Americans the spirit and intelligence to overcome social and personal adversity.

Murray Talks Music is an excellent introduction to the man’s considerable musical erudition and prolific output. It is a well-edited collection of many of Murray’s finest interviews and essays on music and musicians, and on dancers, artists, and social critics, with many articles and interviews published here for the first time.

Also included by Editor Paul Devlin are liner notes and prefaces written by Murray during his career. The book features an excellent essay by noted jazz critic Gary Giddins in the very personal foreword that celebrates the influence Murray had on Giddins’ career as writer and jazz critic, and offers a salient assessment of Murray’s personal life and many accomplishments over a very long life.

Indeed, Murray’s writing about blues and jazz has been memorialized and its influence felt most acutely in the creation of Lincoln Center’s program and concert venue, Jazz at Lincoln Center.

To be sure, of his 13 published books, it is probably Stomping the Blues that created the most stir at its publication and has had the most influence on American music and musicians. However, Murray’s numerous articles and public  lectures, evaluating and frequently explicating American indigenous music forms, have added significantly to his reputation as one of the most influential music critics of the 20th century whose body of work remains relevant in this century. Fans of blues and jazz—and of Albert Murray—owe a significant debt to the acute editorial  intelligence of Paul Devlin that informs the astute selection of essays and other writings appearing in this book.

Murray was born in rural Alabama in 1916 and received a bachelor’s degree from the Tuskegee Institute in 1939. He also earned a master's degree from New York University in 1948. Having served in the Air Force during World War II, he retired as a major in 1962 after 20 years of service. While in the service, he taught and mentored the young men of the Tuskegee Airmen.

After leaving the military, he began a writing career that would last until his death in 2013 at age 97. While he began writing for publication at age 60, he became prolific as both a novelist and critic. His first, well-received book was The Omni-Americans: Black Experience and American Culture, published in 1970, a collection of mordant and witty essays on politics, music, and culture.

Murray and Ralph Ellison became close friends shortly after Murray graduated from Tuskegee, and remained friends until Ellison’s death in 1994. They wrote a book together, Trading Twelves: The Selected Letters of Ralph Ellison and Albert Murray, a highly influential book that informed a generation of African American scholars and writers from Henry Louis Gates Jr. to Stanley Crouch.

His prizewinning study Stomping the Blues (1976) became an instant classic, and is considered a foundational document for Jazz at Lincoln Center, which he cofounded with Wynton Marsalis in 1987.

Murray co-authored Count Basie's autobiography Good Morning Blues in 1985. At the same time, he was also writing about music and social issues and interviewing musicians including Duke Ellington and Billy Eckstine as well as music industry leaders such as John Hammond Sr.

Murray remained in the intellectual spotlight as novelist, social critic, and interpreter of blues and jazz trends for most of the 20th century; however, he received his greatest attention in the 1980s and 1990s because of his strong influence on critic Stanley Crouch and on Marsalis. He died in Harlem in 2013 at the age of 97. The year 2016 represents the centennial of his birth.

Murray Talks Music consists of 19 pieces of writing. Some—like his interviews with Wynton Marsalis, Dizzy Gillespie, Count Basie, and writing the foreword to the autobiography of Delta blues musician David “Honeyboy” Edwards—are outstanding in their comprehensiveness and astute approach to the artists’ lives. These articles stand as touchstones to these performers, captured through Murray’s sharp lens that combined his own feelings about African Americans and the blues with the lives of his subjects, whom he treated in the context of the period in which they came to maturity.

Murray’s writing style owes a lot to the rhythms of the blues and jazz he wrote about and may take a little getting used to for those unfamiliar with his writing; however, the pronouncements he makes, such as during a lengthy interview with Wynton Marsalis, offer oblique observations that eventually coalesce with the body of his work and offer endless food for thought long after the essay has been read:

Marsalis: In what other American musical forms can you hear the influence of the blues?

Murray: Well, of course in popular music. In rock and stuff like that. You also find it in county and western . . . the percussiveness of country and western. It’s as if they rate enthusiasm over elegance, whereas in our [blues] idiom, the enthusiasm has to be controlled by coolness, too.

In an incisive interview with trumpeter Dizzy Gillespie that covers most of Gillespie’s career, Murray has the opportunity to discuss many of Gillespie’s peers including Thelonius Monk, Roy Eldridge, Fletcher Henderson, Jimmy Lunsford, and even blues/comedy duos like Butterbeans and Suzy and seldom discussed Mississippi Delta musicians.

Throughout these essays, liner notes, and interviews, we are treated to a witty and eye-opening view of the jazz, blues, and even Latin and hip hop and rap music that informs so much of the culture of the 20th and 21st centuries.

This book is recommended to jazz and blues fans feeling the need for unique perspectives often difficult to find in contemporary writing about these musical idioms and their relationship to American culture. In many ways, Murray Talks Music is a veritable textbook that explores the music’s significance in terms of its overall effect on culture, and vice versa. Admittedly, some of the writing is so thought-laden that it may take re-reading. But that’s not a bad thing, as it will provide the reader with much to think about when contemplating the place of blues and jazz music in American culture.