Way Down: Playing Bass with Elvis, Dylan, the Doors, and More—The Autobiography of Jerry Scheff 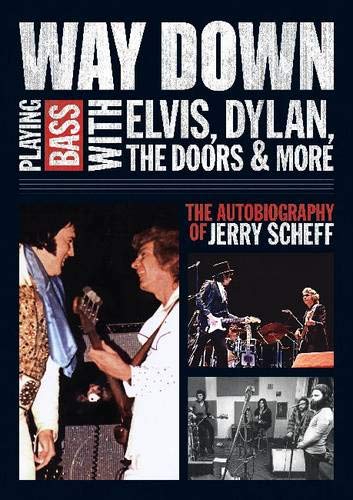 For 45 years, Jerry Scheff has been a highly sought after bass player in the studio and on tour with some of the most famous names in 20th century pop music.

Like most bass players, he has been “always the groomsman, never the groom,” meaning his name and reputation shine brighter among fellow musicians than fans of the music he has contributed so much to as a creative bass player.

In his teenage years, growing up in San Francisco, he auditioned at mostly black clubs where blues and R&B were musical mainstays. It wasn’t long before the underage Mr. Scheff began to believe he was black, talking in a southern black dialect, dressing like his older black musician heroes, and not infrequently, making a fool of his young self.

He tells of the time when a black friend brought him home to meet his mother and sister, and Mr. Scheff continued his black dialectal riff as the friend’s family eyed him quizzically.

Starting with the tuba in high school, Mr. Scheff soon moved to the string bass and his future was sealed. He soon honed his rhythm playing with drummers like Jim Gordon, Earl Palmer, and Hal Blaine, and pianists including Larry Knectel, and saxophone great Jim Horn.

Loathe to move to Los Angeles, where major rock, R&B, and pop acts drove studio sessions seven days a week, Mr. Scheff wound up instead in Palm Springs, where he played a regular hotel gig until a fire immolated his belongings and his only instrument.

Penniless and instrumentally challenged, he finally moved to Los Angeles. That’s where his long career really took off. Having always had an affinity for jazz and R&B, Mr. Scheff secured work in studio sessions and in clubs in the all-black Los Angeles community of Watts, where he enjoyed playing behind major performers.

The Watts riots of 1964 forced him out of Watts, and, as he says, “sadly I was never able to participate in the black music scene again.”As a Los Angeles studio bass player, Mr. Scheff played as many gigs as he could handle, often leaving one session and moving on to one or two more, many times working right through dawn.

Initially, he played on bubble gum hits such as Tommy Roe’s “Sweet Pea,” Bobby Sherman’s hits, The Archies, and even Tiny Tim.

In 1969, Mr. Scheff was recruited to play bass for Elvis Presley’s comeback with his backing band known as the TCB (“Taking Care of Business”) Band. Coincidentally, Mr. Scheff had played on the song “You Ain’t Nothin’ But a Hound Dog,” recorded years before by R&B diva “Big Mama” Thornton.  Mr. Scheff was to play behind Elvis’s famed cover of this song many times during his many years with Elvis.

Where this reader assumed that we would receive Mr. Scheff’s take on Elvis’s private life, it is soon obvious that Mr. Scheff only talks about performers in terms of their music. Therefore, there is no “diss” anywhere in this book, and this comes as a welcome relief. Mr. Scheff has eschewed a reality-TV mentality and has taken the high road, showering us with musical insights from the perspective of a “working stiff” studio musician who also got to play and tour with Bob Dylan, the Doors, the Association, John Denver, and other high-profile acts.  Mr. Scheff remained with Elvis until the latter’s death in 1977. By this point, Mr. Scheff was living in British Columbia and piloting into Los Angeles, and then moved to Malibu, but always kept his hand in with the Elvis band. At the same time, he played studio and tour dates with Eric Clapton, Elvis Costello, Joan Armatrading, and many others.

It’s no surprise that Jerry Scheff’s discography is enormous and can be viewed online.

Since the late 1990s, Mr. Scheff has been touring with the survivors of the original TCB tours (TCB Band, The Sweet Inspirations, either the Stamps Quartet or The Imperials, and Conductor Joe Guercio) in a show called Elvis: the Concert.

Thus far, they have played to over a million people in the U.S., U.K., Europe, Australia, and Asia.

Today, Mr. Scheff is happy to continue playing occasional studio and live gigs, to “keep the cobwebs out,” as he writes. He has taken up song writing as a new passion and continues to advertise his services as a studio musician and live performer.

With Way Down, Jerry Scheff has given us the view from the back row of the music business and the many performers he has had the pleasure to play with—all of whom admire him as an adventurous, talented, and highly creative bass player.

This is an enjoyable book about a life in music. Fans of jazz, pop, and R&B, as well as Jerry Scheff's fellow musicians (most notably bass players), will surely enjoy.