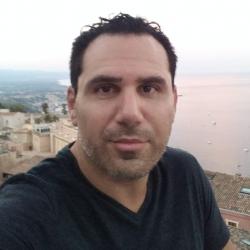 Eric Martone is Dean of the School of Education and Professor of History/Social Studies Education at Mercy College in New York. He completed his Ph.D. in history at Stony Brook University.

Prior to his career in higher education, he was a high school social studies teacher in Connecticut. In recognition of his teaching excellence, he received the 2011 John Rogers Memorial Award from the Connecticut Education Association and in 2013 was acknowledged as a “Teacher of Honor” by Kappa Delta Pi, the international honor society in education.

He has authored or edited more than ten books, including Genealogy and Social History: Understanding the Global Past through Family Case Studies (2022), Alexandre Dumas as a French Symbol since 1870: All for One and One for All in a Global France (2020); the IPPY award-winning Finding Monte Cristo: Alexandre Dumas and the French Atlantic World (2018); Italian Americans: The History and Culture of a People (2017); Mercy College: Yesterday and Today (2013); Royalists, Radicals, and les Misérables: France in 1832 (2013); The Black Musketeer: Reevaluating Alexandre Dumas within the Francophone World (2011); and the Encyclopedia of Blacks in European History and Culture (2009). He also has written more than 30 peer-reviewed journal articles and book chapters and contributed over 170 articles to historical reference works.

Italian Americans: The History and Culture of a People

Alexandre Dumas as a French Symbol since 1870

The Black Musketeer: Reevaluating Alexandre Dumas within the Francophone World

“African Europeans is a well-researched, ambitious, accessible, and concise but comprehensive introduction to this neglected story in European history.”

“a definitive guide to an important and enduring series of British programming that has left a lasting influence on American popular culture and PBS.”

“Allport demonstrates vast knowledge of relevant primary and secondary sources and covers a broad range of events and activities.

The Perfect Fascist: A Story of Love, Power, and Morality in Mussolini’s Italy

Kings and queens continue to captivate the popular imagination. Although dwindling in the modern era, most medieval European states had a monarchy.