The Perfect Fascist: A Story of Love, Power, and Morality in Mussolini’s Italy 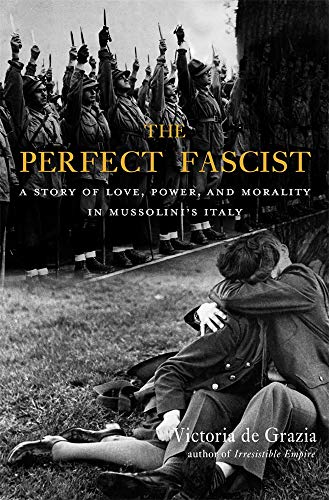 In The Perfect Fascist, Victoria de Grazia explores Italian Fascism through the lens of the career and relationships of Attilio Teruzzi, one of Prime Minister Benito Mussolini’s allies. Teruzzi, to whom the book’s title alludes, is presented as an exemplar of fascism’s “New Man” and embodiment of the flawed moral compass inherent in fascist ideology. The contradictory elements of Teruzzi’s persona are therefore paralleled with those of fascism.

As the fascist regime’s strength rested on its supporters, Teruzzi’s paradoxes reflect how it was built on a faulty foundation. In pursuit of national glory, fascists trampled on family, honor, and law, revealing how fascism seduces, yet distorts and corrupts society.

Since de Grazia uses Teruzzi to explore Mussolini’s (and his fascist regime’s) rise and fall, the book is organized into four parts entitled “Strive,” “Grasp,” “Overreach,” and “Fall.”

After a short prologue teasing Teruzzi’s 1926 marriage to American opera star Lilliana Weinman, part I (“Strive”) backtracks to Teruzzi’s early military career and support for fascism, Weinman’s burgeoning singing career, and the future couple’s meeting. Such events are framed by the rise of Mussolini and fascism.

Part II (“Grasp”) follows Teruzzi and Weinman’s romantic relationship and public courting, engagement, and marriage, and Teruzzi’s ascent within Mussolini’s inner circle. Events are placed within the context of solidifying fascist control over government and society and efforts at colonial grandeur.

Teruzzi and Weinman’s marriage in Rome, shortly after Mussolini had defeated his political opposition, is the heart of part II. Fascists shifted from trying to seize power to exercising that power according to fascism’s new moral order. Teruzzi, a rising political star, became a leader of the Black Shirts. His marriage to the famous American (Jewish) opera singer was fodder for propaganda and the press. Consequently, the wedding was a state-managed event, with Mussolini as a witness. As Weinman was not overtly Jewish, this fact was subsumed by her status as an American.

De Grazia uses the marriage “as a springboard to explore moral life” under the fascist regime. However, the womanizing Teruzzi and his new bride soon experience marital troubles.

Part III (“Overreach”) reveals how Teruzzi and Weinman’s marriage quickly soured. At that time, a divorce was impossible in Catholic Italy. Consequently, Teruzzi sought an annulment. The attempt degenerated into a contentious 18-year public melodrama. Teruzzi presented himself as a moral, good Catholic and anti-communist lured by a Jewish seductress.

Weinman’s Jewish identity, previously downplayed, became emphasized among allegations she was not a virgin at marriage. She conversely presented herself as a defender of her family and virtue. The scandal, which involved lawyers, doctors, and religious figures, allows de Grazia to explore relations between the Catholic Church and Italian government under fascism.

As Teruzzi’s troubles increased, things started spiraling out of control for fascists with their expanding ambitions, engaging in war with Ethiopia to grow a colonial empire, supporting dictator Francisco Franco in Spain, and extending fascist control over the private sphere.

After allying with Nazi German dictator Adolf Hitler, the Italian fascist regime became increasingly anti-Semitic, introducing its first race laws targeting Jews. Such laws revealed Italian fascists’ shifting moral compass and placed Teruzzi, ultimately a minister of Mussolini’s African empire, in a precarious position. Teruzzi was involved in a tumultuous annulment from his Jewish wife, but he was also in a relationship with Yvette Blank, another Jewish woman, with whom he had a daughter. Such behavior among Mussolini’s inner circle caused the Nazis to question its Italian allies’ resolve regarding the Final Solution.

Part IV (“Fall”) relates Teruzzi’s and the Italian fascist regime’s declining fortunes during World War II. The fascist government faced military setbacks in its African colonies. Teruzzi, “the public face of Fascist Italy’s collapsing empire,” saw his career decline rapidly. He found himself struggling to protect his daughter and her mother because of their Jewish heritage from the regime he helped build, living in constant fear as pressure increased from Italy’s Nazi allies for more extreme race policies.

German forces occupied Italy to halt an Allied invasion, establishing a puppet Italian government to prevent Italy’s capitulation. Mussolini, clinging to fading dreams of restoring Italian grandeur, vented his frustrations on his supporters. When the Allies retook Italy, the fascist regime’s collapse prompted a violent turn against its leaders from the Italian people. Teruzzi’s life was in danger; he became a fugitive. He was captured and imprisoned for his role in the fascist regime. His appeals prompted his release in 1950; he died shortly thereafter.

A brief epilogue concludes the book, which also includes maps and photos.

The Perfect Fascist is really two intertwined stories. The first story, that of Teruzzi and Weinman, is written in a narrative history approach—which involves writing history as an unfolding story focusing on characters that propel events forward—common for history books written for a consumer market.

The second one, an exploration of the fascist regime’s moral order, is something one would expect to find in a scholarly monograph. This is a potentially dangerous approach, as the book avoids being a traditional biography with casual readers’ expectations, while simultaneously refraining from being a scholarly monograph and academics’ expectations.

By using the former to explore the latter, de Grazia crafts a book that seamlessly marries both approaches, not only contributing to the academic field of history, but doing so in a way to make these scholarly topics accessible and interesting to a mass audience. The way she structures and balances her narrative reflects her skills as a historian and writer.

The Perfect Fascist is therefore an engaging, well-written, and thoroughly researched book. A great storyteller, de Grazia recalls the melodramatic lives of Teruzzi and Weinman, which come vividly to life.

De Grazia suggests her book reveals a “new understanding of the social and affective nature of the men who are the principle players to a greater or lesser degree in all totalitarian political regimes.” From this perspective, The Perfect Fascist has contemporary political relevance, as ultra-nationalist politics have gained traction in several western democracies.