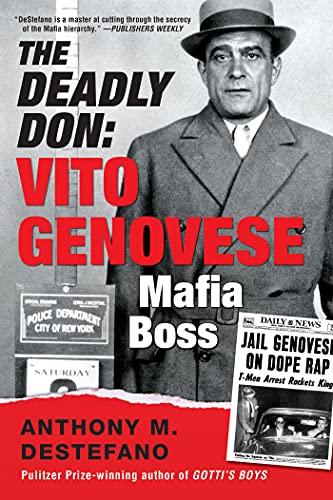 “a fast-paced, engrossing read that casual readers and enthusiasts for stories related to true crime and the Mafia won’t be able to refuse.”

Anthony DeStefano opens The Deadly Don: Vito Genovese, Mafia Boss with a discussion of a scene from the World War II black comedy novel, Catch-22. In that novel, the man antagonist encounters an old “madman” at a brothel who “was so unprincipled,” he’d support “whichever army or dictator was on top at the moment.” As a result of his behavior, this old man survived the various regime changes and the tumult going on around him to live out his carefree existence. In his book, DeStefano suggests that this character’s philosophy for survival—“gauging the way the prevailing political winds blew and backing whomever was on top at the moment”—describes Vito Genovese perfectly.

This analogy becomes the running theme of DeStefano’s biography as we move through the various events in Genovese’s life. Consequently, Genovese was a contradictory, cunning, calculating, and ruthless underworld figure who managed to survive a lifetime in the Mafia, becoming one of the most important and influential figures during its golden period.

Vito Genovese (1897–1969) led New York’s Genovese crime family and became “boss of bosses” of the American Mafia during the 1950s. Born in Tufino, Italy, he immigrated to the U.S. as a teenager and began his criminal career in New York. Genovese became an associate of rising Italian American gang leader, Charlie “Lucky” Luciano. During the 1920s, Genovese began working for Mafia boss Giuseppe Masseria.

By 1931, the Castellammarese War, a feud between Masseria and his rival, Salvatore Maranzano, over control of New York’s Mafia, was hurting business. To end this conflict, Luciano and his associates, including Genovese and Frank Costello, betrayed Masseria to Maranzano. Maranzano subsequently organized New York’s Mafia groups into five families, one of which was led by Luciano. Genovese became Luciano’s underboss. Later that year, Luciano and his cohorts moved against Maranzano. Also in 1931, Genovese’s first wife died. He sought to marry Anna Petrillo; however, she was already married. In 1932, her husband was found mysteriously murdered. Shortly thereafter, she married Genovese.

In 1936, Luciano was convicted of running a prostitution ring and was sentenced to prison. He soon appointed Genovese as acting boss. Genovese also became a naturalized U.S. citizen at this time (he was denaturalized during the 1950s). However, in 1937, Genovese fled to Italy to avoid prosecution for the murder of mobster Ferdinand Boccia. Genovese settled near Naples, while Costello became acting boss.

Genovese became a prominent mobster in Italy. He was involved in narcotics trafficking and organized a blackmarket operation with members of the Sicilian Mafia. After some political maneuverings, Genovese became acquainted with fascist dictator Benito Mussolini and received Italy’s highest civilian medal. When Allied forces invaded Italy in 1943 to help win World War II, Genovese offered his services to the U.S. Army. He became an interpreter/liaison officer in Naples. However, military police in Italy arrested Genovese upon investigating his blackmarket activities. He was eventually shipped to New York as a fugitive to face trial. Mobster Ernest Rupolo had implicated Genovese in Boccia’s murder, but two further witnesses for the prosecution were murdered. Without corroborative testimony, charges were dismissed in 1946.

Genovese returned to his New York crime family as a caporegime, or captain. He considered this a demotion. Meanwhile, he learned that his wife had been unfaithful to him while he had been away, and the dissolution of their marriage became a dramatic, drawn-out affair. The man involved was murdered. During the Kefauver Hearings, a congressional committee investigated organized crime in interstate commerce. Mobsters were called to testify; the testimonies were broadcast on television. The increased attention Costello received during these hearings led to his downfall. He was constantly engaged in legal proceedings during the 1950s. Genovese, now underboss, plotted against Costello. In 1957, Genovese ordered Costello’s murder. Costello survived the attempt, but he stepped aside to let Genovese become boss.

That year, Genovese called a gathering of the leading Mafiosi in America to attend a meeting to affirm his status as boss of the Genovese crime family and head of the commission governing organized crime. The conference was scheduled at mobster Joseph Barbara’s farm in Apalachin, New York. State police, noticing an increase in activity at the farm, went to investigate. The attendees fled the location in a state of panic.

During the 1950s, Senator John McClellan formed and chaired the Select Committee on Improper Activities in Labor and Management to investigate organized crime’s influence in labor unions. In 1958, Genovese testified under subpoena. However, he cited his Fifth Amendment rights to avoid answering questions. Shortly thereafter, Genovese was indicted and convicted on narcotics trafficking charges. He received a 15-year sentence. Genovese’s allies controlled the organization on his behalf while he was in prison.

During the 1960s, mobster Joseph Valachi gave federal testimony about the organization and inner workings of the American Mafia. The five crime families in New York became known by the bosses in place at that time, thereby permanently linking Genovese’s name to the crime family he controlled. Genovese died in 1969 in prison custody.

In composing his biography, DeStefano “immersed” himself into Genovese’s life, reviewing court records, affidavits, prison records, miscellaneous archival documents, and other materials from the public record, as well as countless newspaper and magazine stories to reconstruct events. He even conducted some interviews to flesh out his narrative. DeStefano also uses diverse materials from various archives, including the National Archives and Records Administration, the New York City Municipal Archives, and denaturalization records obtained from a federal court in Philadelphia.

The Deadly Don includes primary source material that has never been used before. Some of the unique sources used in this biography include declassified papers detailing the story of Genovese’s life and death in prison as well a private description that Genovese gave in 1954 as part of legal efforts to strip him of the U.S. citizenship granted to him in 1935 in which he recounted his early life (essentially, a “memoir” of his childhood and beginnings in organized crime).

However, there are no footnotes or endnotes in The Deadly Don. While there is a “notes” section in the end matter, it is simply a list of books for further reading based on key topics covered in each chapter. Therefore, while seemingly well-researched, it is impossible to tell exactly where DeStefano’s information is coming from or where to go to find it. This is rather disappointing, as the described research methods indicate The Deadly Don’s potential as a more serious piece of scholarship and definitive narrative of Genovese’s life.

Nevertheless, DeStefano is a good storyteller, and his narrative is crisp and draws the reader in. As it stands, his biography of Vito Genovese is a fast-paced, engrossing read that casual readers and enthusiasts for stories related to true crime and the Mafia won’t be able to refuse.