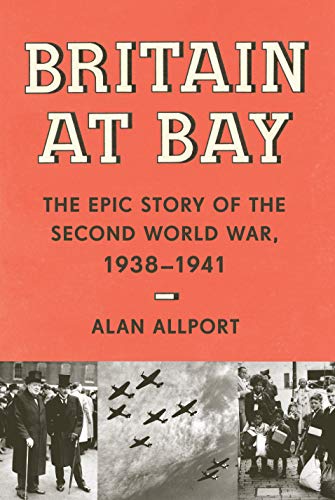 “Allport demonstrates vast knowledge of relevant primary and secondary sources and covers a broad range of events and activities. The book and its subsequent second volume will likely emerge as a definitive history of Britain in World War II.”

World War II had a profound impact on Britain and its population. Ronald Arthur Cordery, born in 1929 in the St. Martin district of London, was one such individual. Only 10 years old when war began, he and his younger sisters, like many London children, were sent outside the city for their safety. However, after bombings near the school where Ronald was sent, he returned home to live with his mother, Nora. He later joined the Royal Air Force when he became a young adult before moving to Canada and pursuing a career as a drafting technician.

Contemporary Britain is often perceived as being forged through its World War II experiences. Alan Allport’s Britain at Bay, the first of a planned two-part history of Britain in World War II, examines the military and political dimensions of the conflict during its first few years.

As Allport argues, “an attempt to understand how Britain fought in the Second World War: how it became involved in it in the first place, how it fought it, why it was ultimately on the winning side and what the war did to its institutions, its culture and its society.” Through examining these questions, Allport focuses on the human element, exploring how individuals’ lives contributed to and were impacted by the outcome of events.

As the first volume, the story is largely one of defeat and setbacks, first in the diplomatic arena and then in the military one. It shows how Britain nearly—but only nearly—managed to hold out against the Nazi German onslaught in the early 1940s despite cumulative catastrophic actions. The book ends on a “note of cautious hope” that will be expanded upon in the second volume.

Britain at Bay is divided into five parts, each composed of four to five chapters.
Part one, “The British Way and Purpose,” provides an overview of Britain and what it was like in the years leading up to World War II. Part two, “Umbrella Man,” focuses primarily on Britain’s involvement in the catastrophic political and diplomatic developments in Europe that ultimately led to the outbreak of World War II.

The subsequent part, “Companions in Misfortune,” navigates through Britain’s early mobilization efforts and military defeats, including the retreat from Dunkirk and the political ascendency of Prime Minister Winston Churchill. Part four, “And Only England Stands,” recounts Britain’s attempts as the only remaining major European power standing up to the Nazi German advances to establish itself as an “island fortress” free of Nazi German control.

The final part, “A New and Mostly Better Phase of the War,” details the roles of the royal navy and air force to try to vigilantly keep the German forces at bay and constant air bombing to a minimum. With the Nazi German invasion of the Soviet Union, and the Japanese attack on Pearl Harbor, the prospects of the additions of the Soviet Union and United States to allied side provide hope to the British cause.

Although it covers many conventional topics, Britain at Bay is largely a retelling of the story of Britain’s entry into World War II and its subsequent national decline, as it challenges several popular assumptions. Allport suggests several reassessments and revisions of the roles various key political and military figures, such as Winston Churchill and Neville Chamberlain, played in the war’s events. Such new interpretations help distinguish Allport’s book from those that have come before it.

Allport also navigates seamlessly from the high political, diplomatic, and military realms to that of ordinary individuals, weaving in biographical vignettes and anecdotes that reveal ordinary people’s experiences.

While well-researched with extensive academic citations, Britain at Bay is highly readable and engaging. Allport demonstrates vast knowledge of relevant primary and secondary sources and covers a broad range of events and activities. The book and its subsequent second volume will likely emerge as a definitive history of Britain in World War II.