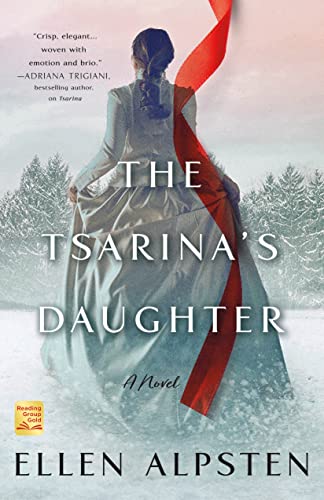 “Alpsten does an excellent job providing vivid characterization and detail. As a result, Tsarina’s Daughter is an engaging novel that blends fact and fiction . . .”

Ellen Alpsten's The Tsarina's Daughter: A Novel continues her planned trilogy following the lives of three female rulers of 18th century Russia by relating the dramatic story of Tsarina Elizabeth, daughter of Tsar Peter the Great and Tsarina Catherine I. All three were members of the famous Romanov dynasty that ruled Russia from the 17th to 20th centuries.

Alpsten provides a fascinating view into the early family dramas within the Romanov dynasty. The Romanovs seized power at the end of the calamitous “Time of Troubles” in the 17th century to return stability to Russia and end the power vacuum created by the Rurik dynasty’s demise. However, members of the Romanov family soon launched competing claims against each other to the imperial throne, creating lots of internal intrigue, plots, and coups.

The Tsarina’s Daughter is a sequel to Alpsten’s Tsarina: A Novel (2020), which focused on the life of Tsarina Catherine I. Catherine, Peter the Great’s second wife, was an Estonian from humble, peasant origins who rose from her beginnings as a serf to become the ruler of Russia after her husband’s death.  Catherine’s fascinating and seemingly improbable rise to political power is often overshadowed by that of her husband and other dynastic personalities of the era. In Tsarina, Catherine tells her story in the first person, ending it with her assumption of the Russian imperial throne. Tsarina presents a strong woman who overcomes many obstacles and tragedy to become the most powerful person in Russia.

The Tasarina’s Daughter continues the Romanov dynasty’s story by following the life of Tsarina Elizabeth. Like the previous novel, the story is told from the main protagonist’s point of view. Alpsten begins her story with Elizabeth’s 1741 coup d’état to seize the Russian imperial throne. She then takes us back to the events that led to this pivotal moment in her life (and Russian history).

Elizabeth is presented as a young woman insulated by luxury, living happily with her sister, Anna. She is spoiled by her father, Peter the Great, who intends to marry her to the king of France and expand Russia’s connections with Western Europe. After Elizabeth receives a strange prophecy by an old crone in the woods, the novel’s series of dramatic events unfold. Her father dies, and her mother assumes the role of reigning tsarina as Catherine I.

Catherine dies shortly thereafter, leaving a power vacuum within the empire. As various factions of the Romanov family vie for the imperial throne with support of various allies, Elizabeth is forced into a situation of survival in which she has to choose to either become a victim of dynastic intrigue or scrape up the drive to seize the throne for herself, even if it means going against former allies and distant members of her own family. Elizabeth’s character journey from a coddled, spoiled princess to a more realist, ambitious, determined, and resolute ruler, is the novel’s main focus and in many ways echoes that of her mother in the first novel.

In Russian history, Tsar Peter the Great was himself initially made co-tsar with his half-brother, Ivan V, to settle disputes between noble factions. Peter the Great was an ambitious, visionary, but ruthless ruler who sought to forcefully “modernize” Russia through the adoption of Western European culture. He contributed to the subsequent dynastic troubles that followed his death—the period most prominently featured in Alpsten’s novel—by having his eldest son and heir executed, and never naming a new successor. This paved the way for his wife, Catherine I, to succeed him until her death in 1727.

The Tsarina’s Daughter takes us through the tumult that followed. Tsar Peter II, the child of Peter the Great’s eldest son, assumed the throne after Catherine I’s death, only to die three years later and end the male Romanov line. Tsarina Anna I, daughter of Peter the Great’s half-brother, Ivan V, subsequently seized power. Her reign was relatively short, and on her death, she named her sister’s son, Ivan, as her successor. Only an infant at the time, Tsar Ivan VI was used as a pawn in the power games of various competing Russian aristocratic factions. In 1741, Tsarina Elizabeth took the throne in a coup d'état, and Ivan VI and his family were imprisoned.

In 1742, Tsarina Elizabeth brought her sister’s son, Peter of Holstein-Gottorp, to Russia and proclaimed him her heir. He married a German princess, Sophia of Anhalt-Zerbst, who took the Russian name Catherine upon her marriage, overthrew her unpopular husband when he became Tsar Peter III in 1762, and reigned as Tsarina Catherine the Great. Her son, Tsar Paul I, would pass new laws of succession barring females from inheriting the imperial Russian throne. As The Tsarina’s Daughter essentially takes the story to 1741, this material is likely set to be covered in Alpsten’s final novel in her trilogy.

From a historical standpoint, the book includes several anachronisms and takes some liberty with facts.  As in all works of historical fiction, the novel’s characters, even though based on real figures, possess traits, personalities, beliefs, and opinions that are the author’s conjecture; however, the portrait of the characters and their motivations in the novel are plausible based on the historical record and help bring them to life. Alpsten does an excellent job providing vivid characterization and detail. As a result, Tsarina’s Daughter is an engaging novel that blends fact and fiction to shed light on one of the most powerful and significant female rulers in modern European history and helps capture the drama of 18th century Russian life and politics.