The Science of Murder: The Forensics of Agatha Christie 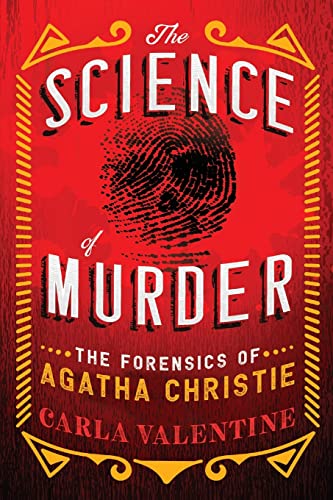 “Valentine’s book is . . . a unique and engaging reference work that all Christie fans should enjoy.”

Agatha Christie, among the bestselling authors of all time, is known for her crime fiction featuring the dapper Belgian detective, Hercule Poirot, and the demure Englishwoman, Miss Marple. In solving crimes, Christie’s characters use methods that were largely ahead of her time to unravel cases seemingly impossible to solve.

Carla Valentine, who has a background as a pathology technician in a mortuary, has compiled The Science of Murder: The Forensics of Agatha Christie, an intriguing reference work that uses the fictional world Christie created to provide a detailed overview of the science behind the methods Christie employed in her work.

Christie was an avid student of forensics (although “forensics” is a modern term not used in Christie’s day). She was a member of a detection club comprised of other crime-fiction writers (who swore an oath on a skull named “Eric” in a “tongue-in-cheek” ceremony), an avid connoisseur of true crime, and a follower of the latest advances in crime-solving. She learned much about such tools as fingerprinting, toxicology, ballistics, and document analysis, which she incorporated into her stories with a high level of scientific accuracy for her era.

Christie also had a wide knowledge of drugs, poisons, and holistic medicine from time in her younger days spent as a nurse and pharmacist. Therefore, her stories are full of forensic detail, “an expert tapestry of human observation and ingenuity, threaded through with the emerging sciences and deduction methods of the era.”

The Science of Murder’s structure is inspired from a line of dialogue from a character in Christie’s novel, Towards Zero. As a result, Valentine, “like an investigator who appears once the body has been removed to the mortuary,” begins by “analyzing ‘causes and events’ metaphorically at the scene of the crime, scrutinizing footprints, fragments of paper, and spent bullets.” At that point, she arrives at the body “to examine wound patterns, toxicology, and other artifacts noted at autopsy. Here we will experience the finale to our investigation—the denouement, the book’s conclusion: zero hour—which will tie all those forensic threads together into a neat little investigative knot.”

The book also concludes two appendices (a “Murder Methods Table” and “Maps and Floorplans” derived from events in Christie’s stories), a summary of all the Christie stories referenced in the book, and reference notes.

The Science of Murder is focused on how crime scene analysts search for clues that shed light on how homicide victims died and who may have killed them. In her chapters, Valentine traces the forensic evolution behind such evidence as fingerprints, ballistics, handwriting, and toxicology, including examples of each from several Christie novels and short stories. Her book provides a scientific view into how the forensic methods developed for each, interspersed with a clever use of anecdotes, background information on real murder cases Christie would have been familiar with, details from Christie’s life, and literary details from Christie’s work. Therefore, each chapter essentially follows a formulaic mixture of forensics history, details about Christie and how she would have learned these methods, and examples of how they were used in her work.

In her introduction, Valentine discusses how her career choice came from her fascination for Christie’s murder stories. Intrigued by the history of forensic science, and a lover of murder mysteries, she found Christie’s work to be a “perfect combination of the two.” The author’s enthusiasm for both forensics and Christie’s stories is evident in each chapter.

Although intended for general audiences, Valentine provides much detail in her discussions, making this a comprehensive introduction to the subject of forensic science. Christie emerges as an author who was ahead of her time, incorporating her era’s groundbreaking forensic analysis and methods into her fictional world. Despite its potential to fall within the realm of the macabre because of its subject matter, Valentine’s book is instead a unique and engaging reference work that all Christie fans should enjoy.