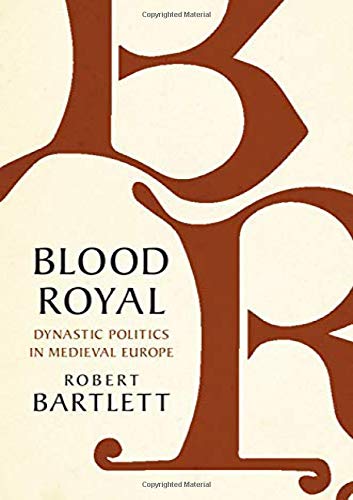 Kings and queens continue to captivate the popular imagination. Although dwindling in the modern era, most medieval European states had a monarchy. Consequently, monarchical governments were an essential feature of medieval western society. Under such a political system, since a royal family (or dynasty) held power, state politics could be viewed as family politics, or “competition and cooperation within the ruling family, shaped at every point by the human life cycle of birth, marriage and death, and also by ideas of what a dynasty was.” Certain life events—such as births, marriages, and deaths—were therefore invested with political significance and consequences.

Robert Bartlett’s engaging Blood Royal focuses on both the role of family dynamics and family consciousness in the politics of medieval European monarchical systems circa 500 to 1500 CE. He creates an authoritative historical survey of dynastic power in Latin Christendom in western and central Europe and the Byzantine Empire (or former Eastern Roman Empire), providing an impressive level of depth while putting aspects of royalty and kingship in perspective.

Each chapter brings the reader into this political world and aspects of medieval politics’ ties to family politics. Bartlett transitions seamlessly from example to example, but this apparent ease and vast knowledge reflects years of research and underscores his area expertise.

Part I (“The Life Cycle”) focuses on the first aspect of Bartlett’s conception of family politics. Assumptions about proper social roles and power structures shaped by male-line succession influences family life. Under a monarchy, decisions related to life events shaped political life. Each chapter is this section is framed around certain problems monarchs faced in this broad area.

For example, choosing a bride had far-reaching consequences. Should a monarch marry a woman from a local noble family or a woman from a foreign dynasty?  What were the benefits and disadvantages of marrying for political alliances or ways to transition power or maintain continuity (often by marrying a previous monarch’s widow)?

Monarchs also faced challenges waiting for sons to be born. Male heirs were necessary for governmental stability and peaceful transitions of power. The lack of male heirs created potential instability or unrest. Since the wife was perceived as responsible for the baby’s sex, one problem monarchs faced was what to do with wives who bore no sons (or no children at all). Some considered adoption and whether this could be employed to maintain dynastic power and stability.

Other potential difficulties arose regarding father-son relationships and female sovereigns. Monarchs sometimes died leaving a young heir. Occasionally, a contender arose. More frequently, a regent from the family had to make decisions. Selecting a regent was a contentious issue; some became hesitant to relinquish power. While female rulers existed in medieval Europe, it was uncommon. Some states, like France, invented a custom—the Salic Law— to thwart female succession or claims of succession through the female line.

Monarchs often had mistresses. In early medieval Europe, mistresses could hold more formal court positions. What a monarch did in bed, Bartlett notes, was not private, as it had potential political consequences. The future roles of illegitimate royal offspring were always an issue. Without legitimate male heirs, some monarchs contemplated whether to acknowledge an illegitimate child to preserve dynastic stability.

Part II (“A Sense of Dynasty”) focuses on manifestations of dynastic consciousness, addressing topics such as monarchs’ names and numbering, dynastic uses of saints and images, heraldry, family trees, prophecy and astrology as responses to dynastic uncertainty, the threat of pretenders and dynastic imposters, new families and new kingdoms, and dynasties and the non-dynastic world.

Using a common family surname to express dynastic identity was rare. It was expressed in other ways. A dynastic family might use certain first names repetitively. Numbering of rulers to establish stability/legitimate power over time developed in the medieval period, and where to begin was a subjective issue. Using common regnant names and numbering collectively indicated both continuity and legitimacy.

Other ways to express a sense of dynasty existed in popular culture. Dynasties adopted a patron saint or attempted to get a family member declared a saint to buttress its authority. Monarchs reinforced a sense of dynasty visually through images of figures of past rulers accompanied by symbols of power and through more abstract heraldry, which developed in the medieval period as distinct family emblems.

There was also an interest in establishing family trees, making formal genealogical connections to prominent forbearers in visual form to maintain historical rootedness and continuity to the dynasty’s claims to power. New dynasties had to situate their claims to power within this framework, often identifying myth/semi-legendary founders or omitting troublesome ancestors.