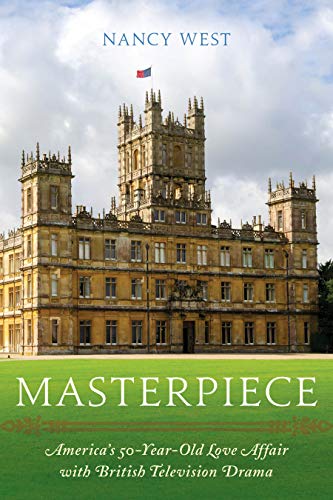 “a definitive guide to an important and enduring series of British programming that has left a lasting influence on American popular culture and PBS.”

Over the past several decades, many Americans’ exposure to British history, literature, and culture has come through Masterpiece. With Masterpiece: America’s 50-Year-Old Love Affair with British Television Drama, Nancy West provides a comprehensive and critical guide to the PBS award-winning anthology series Masterpiece (previously Masterpiece Theatre) as well as its sister series Mystery!

Although the programming was and is very British in terms of its content and style, it has nevertheless remained popular with American audiences. West attributes this to the series’ “kaleidoscopic variety of formats, characters, actors, settings, and storylines,” as well as its “allure of tradition” that Americans find so appealing. She devotes an entire chapter to Upstairs, Downstairs (1974–1977) and Downton Abbey (2011–2016)—two seminal Masterpiece offerings—and highlights the most popular productions, characters, and actors.

West’s book examines the series in nine thematically organized chapters. Chapter one focuses on the origins and development of the series, which pioneered the format of the mini-series. Masterpiece, featuring long-time host Alistair Cooke, began with The First Churchills (1971) and is a unit within WGGH-Boston’s PBS station and flagship studio for other PBS productions. Masterpiece’s programming remains produced by various British-based independent production companies. Chapter two focuses on Upstairs, Downstairs (1974–1977) and Downton Abbey (2011–2016), while chapter three examines the influence of politics and culture on Masterpiece productions.

The next chapters highlight many of the major literary-based productions that have appeared on Masterpiece. West devotes subsections to the series’ numerous adaptations of Jane Austen novels, like Sense and Sensibility (2008) and Sandition (2019), and Arthur Conan Doyle’s detective stories featuring Sherlock Holmes. For the latter, West devotes her attention to actor Jeremy Brett’s classic and faithful interpretation of the character from 1984 to 1995 as well as actor Benedict Cumberbatch’s modern take on the character, with the stories transferred from Victorian England to the present day, in Sherlock  (2010–2017).

Masterpiece’s long-running and definitive adaptations of Agatha Christie’s Poirot mysteries, featuring David Suchet as the dapper little Belgian detective, are among its most widely known mystery adaptations and are particularly notable for including nearly every Christie adventure featuring the character with the same actor in the role. Many of these adaptations were written by regular Masterpiece writers Andrew Davies and Clive Exton. Other notable productions include the popular adaptations of John Mortimer’s craggy barrister Horace Rumpole (played by Leo McKern) in Rumpole of the Bailey (1978–1992); Maigret (1992–1993); Cadfael (1994–1998); Inspector Lynley (2001–2008); and Endeavor (2013- ), a prequel to Inspector Morse.

Chapter seven revisits some memorable characters appearing in Masterpiece productions, including Lord Melbourne (played by Rufus Sewell) in Victoria (2017–   ), the title character (played by Bill Nighy) in Worricker (2011, 2014), the Durells family in The Durrells in Corfu (2016–2019), and Jeeves (played by Stephen Fry) in Jeeves and Wooster (1990–1993).

The next chapter explores some of the popular actors appearing in Masterpiece productions who have given command performances. West devotes attention to such roles as Ian Richardson’s memorable performance in in House of Cards (1990), Helen Mirren’s in Prime Suspect (1991–2006), Damian Lewis’s in a remake of The Forsyte Saga (2002), Gillian Anderson’s in Bleak House (2006), and Claire Foy in Wolf Hall (2015), before she went on to gain fame as the young Queen Elizabeth in Netflix’s The Crown. West also highlights Kenneth Branagh’s masterful and compelling portrayal of Swedish detective Kurt Wallander in Wallander (2009–2016), based on Henning Mankell’s series of novels.

The book should appeal to Masterpiece’s fans and those interested in the series. However, within the context of exploring “the five cornerstones of Masterpiece’s appeal: aspiration, nostalgia, Anglophilia, conventionality, and sentimentality,” West analyzes the impact on Masterpiece’s programming of politics and culture (such as race and color-conscious casting), and funding challenges that help it rise above being simply a gossipy fan book. As a result, West’s book provides a definitive guide to an important and enduring series of British programming that has left a lasting influence on American popular culture and PBS.