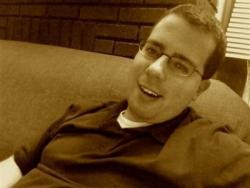 Michael Pucci is a reference librarian at a public library in New Jersey, where he now resides after living for almost 10 years in Charlotte, North Carolina. As a librarian, Mr. Pucci has assisted in the development of the adult and young adult materials, as well as collaborated with other educators in creating a summer reading list for junior high school students.

While studying journalism at UNC, Mr. Pucci wrote for and helped edit the Arts & Entertainment section of his college newspaper, The Daily Tar Heel. He has also written for the online pop culture magazine Popmatters.

He is a graduate of the University of North Carolina, and he received his Master’s degree in library science at Rutgers University. When he’s not spending too much money in bookstores across the Metropolitan area, he’s either watching a Yankee game or trying to figure out how to fit all of his books on his shelves.

The Dylanologists: Adventures in the Land of Bob

“Indeed, the saddest figure in The Dylanologists turns out to be Dylan himself.”

The Public Library: A Photographic Essay

“The Public Library is a beautiful book intended for prominent display, but it is also a work of public service: at the risk of proselytizing, libraries are the most truly democrat

“Carthage shows an author still in command of her vision . . .”

“You will know Nora Eldridge within the first five pages, which are among the most memorable you will read all year.”

Every Love Story Is a Ghost Story: A Life of David Foster Wallace

“Every Love Story Is a Ghost Story succeeds in offering the clearest glimpse yet of what it must have felt like to live in Wallace’s head . . .”

This Bright River: A Novel

“. . . a deeply compassionate, politically defiant, and surprisingly underwhelming novel, as provocative as it is inevitable.”

The Fault in Our Stars

“The Fault in Our Stars feels like the stakes have been raised, a swing for the fences that tackles big themes (life, love, and death) and succeeds. Mr.

These Dreams of You

“As in Zeroville, Mr. Erickson’s previous novel, These Dreams of You is told in short kinetic bursts, some no longer than a paragraph, and moves at a propulsive pace.

“As a fairy tale, Taft 2012: A Novel is a welcome tonic to the bottomless cynicism that can consume our politics.

Walk Like a Man: Coming of Age with the Music of Bruce Springsteen

“I’ve strugged in the past to articulate exactly why Bruce Springsteen’s music cuts so deeply for me. Thanks to Robert Wiersema’s heartfelt book, though, I think I’m a little closer.”

“The Twoweeks is written by a veteran author who is not trying to dazzle with literary showmanship but with intimate storytelling.”

How the Mistakes Were Made

The Art of Fielding: A Novel

“. . . justifies the hype . . . an unabashed, full-throated baseball novel that stays just general enough to appeal to those with no interest or knowledge of the game.

“Readers of There But For The have a similar choice to make.

“The anarchic breakdown of law and order captivated anyone with a television set, perhaps becuase watching lawless chaos provides us with an unusual, vicarious thrill.

No Rest for the Dead

“No Rest for the Dead . . . not an anthology, but a single story with each author handling a chapter—a literary game of Telephone. . . .

“House of Holes—without much question the most explicit novel ever released by a mainstream publisher—exists less to provoke than to throw down some kind of gauntlet, shatter any l

The Leftovers: A Novel

“Despite . . . shortcomings, The Leftovers will still please Mr.